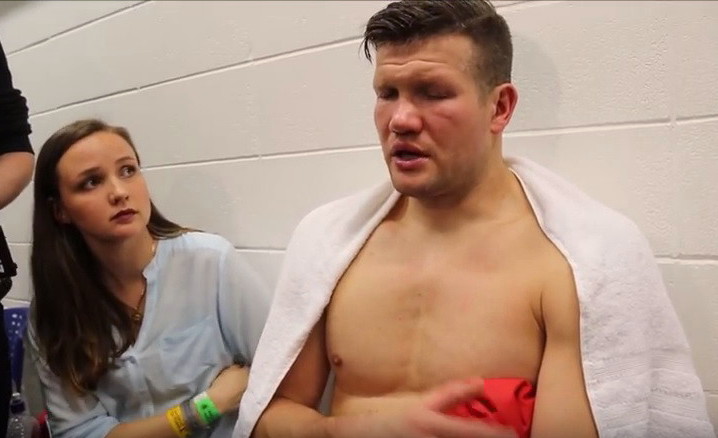 By Jim Dower: Alexander Dimitrenko (40-3, 26 KOs) pulled off a big upset last Saturday night in destroying unbeaten IBF International heavyweight champion Adrian Granat (14-1, 13 KOs) in the 1st round in their fight at the Baltiska Hallen, in Malmo, Sweden. The 6’7” Dimitrenko knocked the 25-year-old Granat down twice in the 1st round before the fight was halted by referee Timo Habighorst. The official time of the stoppage was at 2:07 of round one.

The 6’7 ½” Granat started out fine in taking the fight to Dimitrenko. Things looked good for Granat until he attempted to throw a right hand. Dimitrenko threw his own right hand at the same time, and his got there first and dropped Grant hard on the canvas. A badly hurt Granat made it back to his feet to resume fighting. Dimitrenko, 34, immediately jumped on Granat in hitting him with a flurry of shots until he sank to the canvas. The fight was then stopped by the referee. Granat never stood a chance. The first knockdown of the round seemed to take everything out of the big Swedish heavyweight.

The win for Dimitrenko was a big one for him, as he knocked out in 3 rounds by Joseph Parker last October in a total mismatch. This is the biggest win for Dimitrenko since his 3rd round knockout victory over Luan Krasniqi in 2008. That was when things looked a lot brighter in Dimitrenko’s once promising career.

For Granat, it was a real shocker for him to lose to a guy that he was expected to beat with ease. Last October, Granat had a big 6th round TKO victory over Franz Rill. That was a good victory for Granat that helped make a name for him.

The draw for Stieglitz ends a 3-fight winning streak he had going since he was beaten by Arthur Abraham in 2015. Steigltiz moved up to light heavyweight following the loss to Abraham.

In other boxing results on the card, former heavyweight world title challenger Mariusz Wach (33-2, 17 KOs) defeated Erkan Teper (16-2, 10 Kos) by a 12 round unanimous decision to capture the vacant IBF East/West Europe heavyweight title. The judges’ scores were 116-112, 115-113 and 115-113. The loss for the 34-year-old Teper was his second in a row. He was beaten by Christian Hammer by a 12 round split decision last October.

Teper’s career was going well in 2015 and early 2016 when he beat Johann Duhaupas, David Price and Derric Rossy in consecutive fights. Wach has a 2-fight winning streak since being stopped in the 12th round by Alexander Povetkin in November 2015. Five years ago, Wach was beaten by former IBF/IBO/WBA/WBO heavyweight champion Wladimir Klitschko by a 12 round unanimous decision in 2012.