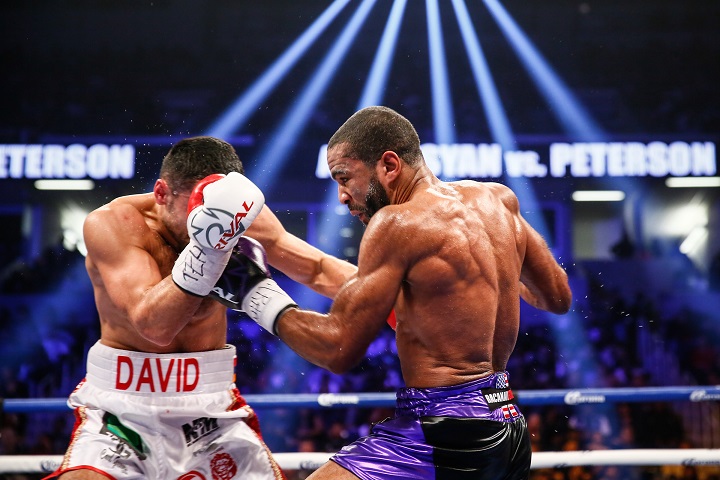 Peterson didn’t look initially in the early rounds, but he took over the fight in the second half of the contest with his inside game. It was good vintage stuff from Peterson, who looked very sharp. There were no knockdowns. Neither guy was hurt, but Avanesyan was worn down in the last half of the contest.

Peterson caught Avayesyan with a nice right hand to the head in the 4th round that stopped him in his tracks. Peterson then started to crank up his body work and take over the fight. It was a good fight from the rest of the way. The only negative that you can say about the fight is that it lacked drama. With no one hurt, it just seemed like a close quarters brawl whether both guys smothered their own power.

Peterson dominated the fight throughout the contest. Peterson was crowding the 28-year-old Avanesyan in every round, hitting him with body shots and outworking him throughout. Avanesyan tried hard, but he just couldn’t match Peterson’s high work rate.
Avanesyan suffered a bloody nose in round 2. It wasn’t a big deal though. He was able to fight hard and give Peterson a tough fight.

In the 10th round, Avanesyan slipped through the loose ropes and almost fell onto the concrete outside of the ring. The ropes were very loose during the fight, and this made things difficult for both fighters when they were against the ropes.

The fight was initially close in the first four rounds, but Peterson took over the fight by the 4th round with his body shots. The volume punching for Peterson made it difficult for Avanesyan to keep up with him. He didn’t have the same boxing ability that Peterson had, and that made things tough.

Peterson could have dominated Avanesyan with his jab on the outside, but instead he opted to go to the inside and work his body. Avanesyan attempted to match Peterson’s inside work, but he couldn’t do it. He was getting overwhelmed with punches.

Avanesyan showed the better power on his shots through the first eight rounds, but he seemed to tire out in the last four rounds of the contest. The body work that Peterson invested seemed to take the energy out of Avanesyan’s shots.

When asked after the fight tonight whether he wants to face the winner of the Keith Thurman vs. Danny Garcia fight, Peterson said, “Of course, anybody in the welterweight division.”

This was a good fight. Avanesyan was a lot better than I thought he would be. His power is good, but he just made a mistake of letting Peterson stay in close for the entire fight. Avaneysan was better when he had some space to get his shots off.

Peterson is going to need to change his fighting style if he’s to have a chance at beating the winner of the Thurman-Garcia fight. Thurman might be too fast and too powerful for Peterson. We’ve already seen Garcia beat Peterson in 2015 by a 12 round decision. 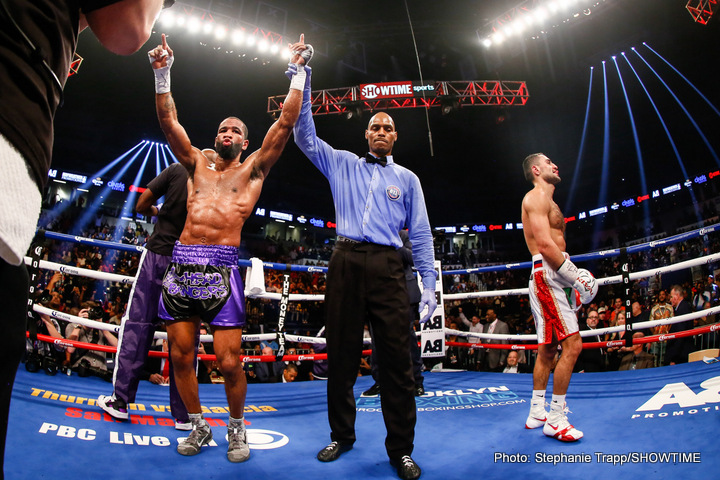