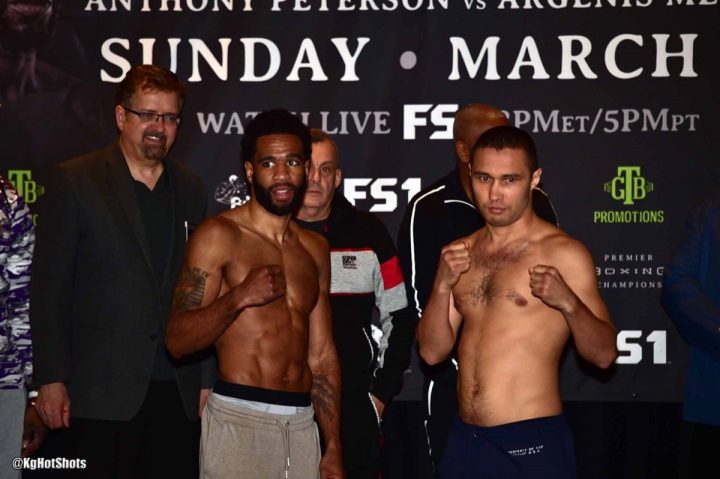 By Mike Smith: Lamont Peterson (35-4-1, 17 KOs) fights tonight against Sergey Lipinets (14-1, 10 KOs) in a 12 round fight in the main event at 8:00 p.m. ET on Premier Boxing Champions on FS1 at the MGM National Harbor in Maryland. There’s a lot riding on the line for these two talented fighters. They both are in need of a victory at this point.

These two former world champions will be battling for relevancy tonight. Peterson is the older guy, and has more to lose obviously if he gets beaten, but Lipinets’ career will implode for all intents and purposes if he’s seen getting beaten by a a guy Peterson’s age. If Lipinets can’t hang with a fighter pushing 40 like Peterson, then he’s going to have to make a hard decision what he wants out of his career. Lipinets had a small taste of what it’s like being a world champion when he briefly held the International Boxing Federation light welterweight title from November 2017 to March 2018, but he’s his 15 minutes of fame is now over, and he’s going to have to figure out how he can capture that glory. Fighting at welterweight seems like a bad idea for the 5’7″ Lipinets, who doesn’t hit as hard as the elite level 147 pounders like Errol Spence Jr., Keith Thurman, Terence Crawford, Danny Garcia or Shawn Porter. Like the light hitting Peterson, Lipinets would be better off moving back down to 140, and looking to grab a title in that division. Unfortunately for Lipinets and Peterson, there are no money fights in that division. The champions that are currently holding belts at light welterweight, Jose Ramirez, Ivan Baranchyk, Kiryl Relikh and Maurice Hooker, aren’t big names, and there’s not a lot of money to make fighting them. Besides that, those are bad match-ups for Lipinets, and the aging Peterson. So now the two former 140 lb champions find themselves at welterweight with the likely goal of just getting a title shot, and a nice payday, but not having much of a chance of beating any of the champions.

Both fighters weighed in successfully on Saturday with Peterson, 35, weighing in at 145.8 pounds, and his opponent Lipinets, 30, coming in at the welterweight limit at 147 lbs.

This is an important fight for Peterson, who hasn’t fought since losing to Errol Spence Jr. last year by a seventh round knockout. Peterson is getting up there in age at 35, and cannot afford to lose to the younger, more powerful Lipinets.

“I know we’re at the top level and I’m facing a top guy. I’m looking to capitalize on the opportunity and move forward,” Peterson said.

Peterson needs to make sure he doesn’t fall apart tonight like he did against Spence in his last fight. Spence, 29, only really opened up on Peterson in the fifth round of that fight, and yet he still quit after the seventh. Lipinets doesn’t possess the same size, power and pedigree of Spence, but he hits hard enough to force a stoppage against an older guy coming off of a loss. Peterson is going to need to be ready for a hard fight because this is not going to be a walk in the park for him. Lipinets has lost just once as a pro, losing to Mikey Garcia in March of last year in a 12 round decision defeat. That was a fight that could have been scored differently with judges that weigh power more than flashy combinations. Lipinets was landing the harder shots, and doing more damage than the flashy, weak shots that Mikey was landing. At the end of the fight, the scoring looked like it came from a different fight than the one that took place. The bloody and badly swollen Mikey was given a 12 round unanimous by the scores 116-111, 117-110 and 117-110. The fight could have been a draw or a win for Lipinets, but not a victory for Mikey, in this writer’s view. Mikey didn’t look like the winner in that fight, but he was the more popular fighter of the two. If Lipinets lands a lot of hard shots on Peterson tonight, he could get the ‘W’, as long as the scoring is reality based and makes sense.

“Lipinets is a tough guy. He only has about 15 pro fights, but he was able to move through the ranks pretty fast,” Peterson said. That got my attention and lets you know that he’s definitely coming to win.”

Peterson has his back against the wall in this fight. He’s been out of the ring for over a year since his seventh round stoppage loss to Spence in January 2018, and he’s getting old at 35. That’s not young for a welterweight, especially one with little punching power.

Lipinets has the edge in punching power in this fight. If he’s able to take the fight to Peterson, he could force a stoppage if he puts a lot of pressure on him for three or four rounds. We might see the towel thrown in to save Peterson if the going gets tough like it was in his loss to Spence.

If Peterson loses tonight, he might want to start thinking retirement. It’s doubtful that he will, but he might want to think about it. The only thing Peterson can do if he loses to Lipinets would be to try and move back down to 140, but there’s no guarantee of success for him if he does go back down. The champions at light welterweight right now are all arguably more talented than Lipinets, who is basically a light welterweight for all intents and purposes.

Light welterweight Anthony Peterson (37-1, 24 KOs) will be fighting former IBF super featherweight world champion Argenis Mendez (25-5-1, 12 KOs) tonight in a 10 round fight. This is the toughest fight for the 34-year-old Peterson since his seventh round disqualification loss to Brandon Rios nine years ago in 2010. At the time of that loss, Peterson was considered a future world champion with a bright future. After the defeat, Peterson seemed to get stuck on the tune-up cycle, taking one easy fight after another without stepping it back up against world class opposition. Only Peterson and his promoters know why he didn’t get back in there at some point against world level fighters. One year of tune-ups would be fine, but NINE Years? Something went wrong with the way that Peterson’s career was directed. He’s been winning his fights all these years since his loss to Rios, but for some reason, he was never put back in with world class opposition until now, if you want to call the 32-year-old Mendez world class at this point in his career. For Peterson, this is a major step up for him from the guys that he’s been facing, even though the 2004 Olympian Mendez is arguably over-the-hill and not the same fighter he was when he held the International Boxing Federation super featherweight title from 2013 to 2014. Mendez has slipped a notch in the last five years, losing to Rances Barthelemy, Robert Easter Jr. and Luke Campbell. Mendez has looked good in winning his last two fights against Ivan Redkach and Eddie Ramirez. Mendez may not be the same guy he was in 2013, but he’ll likely have more than enough to defeat Peterson tonight. Mendez has a much better pedigree than Peterson, and he can do more things when he’s firing on all eight cylinders. It’s a bad match-up for Peterson if Mendez looks the way he did in his last two fights.

A loss for Anthony Peterson will be hard for him to come back from. If he has ideas of fighting for a world title, he can pretty much forget it if he loses tonight against the past his prime Mendez. Losing to Rios nine years wasn’t as bad as it would be for Peterson to get beaten by a fighter going nowhere like Mendez. He’s not going to be winning a world title like Rios was back in 2009. Peterson lost to Rios when ‘Bam Bam’ was on his way up. Mendez is on his way down, and it’s a fight that Peterson cannot afford to lose.


« Canelo preparing for Jacobs fight on May 4

Joe Joyce and Daniel Dubois eager to battle it out »