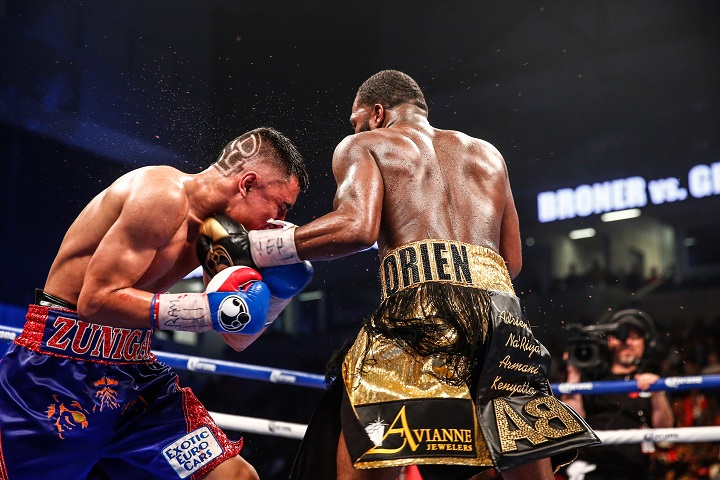 Boxing News 24 scored the fight 7 rounds to 3 in favor of Granados. Broner blamed his poor performance afterwards on him suffering a left injury in round 1. He said he couldn’t use his left hand to jab after round 1, and that’s why he chose to fight on the inside the entire fight. The crowd booed Broner when he was making his injured hand excuse. Broner then rejected Granados’ request for a rematch, saying that he will not be fighting him in his hometown of Chicago.

What was surprising was the huge booing from the boxing fans after the fight. The booing went on the entire time Broner was talking to Jim Gray from Showtime. This was Broner’s hometown, so it was shocking that his own fans were booing him. The only thing you can think it that they were not happy with the results of the fight. These were likely Broner’s fans when they came to the fight but they were not pleased with seeing a controversial decision where the loser of the fight is given the victory instead of Granados.

Granados appeared to control the fight and outwork Broner by a 2-1 margin in virtually every round of the fight. Broner constantly grabbing Grandos in a clinch to keep him from throwing punches. The referee did nothing to address the constant holding by Broner, which is a pity, because it got in the way of the actual fight. Broner was clinching Grandos at a minimum of 10 times per round.

The clinching by Broner got worse as the fight wore on, as he was tiring and looking desperate. It appears that the two judges that scored the fight to Broner were looking at the two of three punches that he would land cleanly in each round. However, Granados was out-landing Broner by a huge margin. Broner should have lost at least 1 or 2 points due to the excessive clinching he was doing in the fight. The referee let Broner get away the clinching without doing anything about it.

In round 4, Broner cut Granados with a forearm to the nose. That a move that Broner was using frequently in the fight, as well pushing off.

This was not the performance that Broner needed for him to show that he’s the top guy or even the second best fighter in the 140lb division. It was a flawed performance by Broner, as he was badly outworked by Grandos.

The best round of the fight for Broner was the 10h round. He landed a few good shots, and kept Granados from getting his punches off by holding and wrestling him on the inside. It was not pretty to watch, but it was definitely Broner’s best round. But he had been dominated in the majority of the other rounds though, and it wasn’t close. Granados looked like the better fighter tonight.

“This was an easy one for me,” said Broner after the fight. “Adrian Granados is a world class fighter. I hurt my left hand in the 1st round. From there my left hand wasn’t no good. That’s why I had to stay on the inside,” said Broner.

Granados had this to say after the fight:

“I thought I outworked him. I know it wasn’t a pretty fight. Let’s do it again. Let’s do it in my house [Chicago],” said Granados.

Broner responded to Granados’ request of a rematch by saying, “This is business. I ain’t going back to Chicago. I’m taking my career seriously.”

It’s too bad Broner doesn’t want to give Granados a rematch, because this fight is going to leave a bad taste in the mouth of a lot of boxing fan, who saw it and felt that Granados was the better fighter. He sure looked like the better fighter. The results of the fight leave deeper questions about what happens with the career of Broner.

Granados is a decent fighter, but he’s arguably no better than the 7th or 8th best fighter in the 140lb division. The fact that Broner couldn’t decisively beat Granados is very troubling, because it means that he’s not as good as the better fighters in the light welterweight division. Broner would likely do poorly if he had to move up in weight to the 147lb division, and he likely can’t move down to the lightweight division at this point in his career. He’s stuck in a bad place.

Broner’s management Al Haymon can certainly get him a world title shot against WBA light welterweight champion Ricky Burns, but I don’t know if Broner can win that fight. Moreover, if Broner is going to be winning controversial decisions over the top guys, then he’s not going to be seen in a positive light by the boxing fans. What was disappointing about Broner’s fight tonight was the fact that he was facing a 140-pounder in Granados and not a 147-pounder. The fight took place at 147, but Granados is not a welterweight. Broner’s two defeats in the past came against welterweights in Marcos Maidana and Shawn Porter. Some boxing fans gave Broner a break for losing those fights because he was facing guys in a division that was not his normal weight class. But for Broner to struggle against a fighter from his own 140 lb. weight class in Granados, it’s not a good sign for him. It tells me that Broner’s best days in boxing may be well behind him at this point.

If you look the boxing forums on the Internet tonight, few fans believe that Broner won. They think he lost to Granados in high numbers. That means that it was just those two judges and likely small percentage of the fans that felt that Broner was the better fighter tonight against Granados. If Broner can’t dominate fighters like Granados, then what does that say about his talent level and ability to find success in the 140lb division in the future? I think a lot of fans that saw Broner struggle to win a controversial decision tonight will say that his best years are now over with in boxing, and that he’s now heading downhill as a fighter.