Hearn says DeGale could win every round against Jack 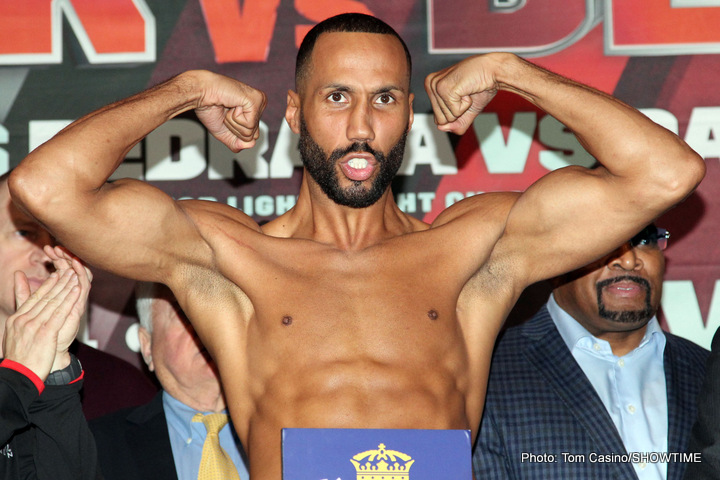 The fight is seen as a 50-50 affair by most boxing fans, but not to Hearn. In his view, DeGale wins ever round of the 12-round fight, and likely stops the 33-year-old Jack. DeGale isn’t seen as a big puncher, and he only rarely scores knockouts.

Jack has only been stopped once in his career by the hard hitting Derek Edwards, and that was in 2014. DeGale doesn’t possess the kind of punching power that Edwards has, and never will.
Hearn needs DeGale to win this fight tonight, because it sets up a big in house Matchroom Sport fight in London later this year between DeGale and #1 WBC Callum Smith, who Hearn also promotes.

It’s a good deal for Hearn if DeGale wins tonight, because he can make a nice little all-Matchroom Sport fight between his two guys in the UK. Hearn says he thinks that he can turn the 30-year-old DeGale into a PPV star in the UK. It’s kind of late in DeGale’s career for him to be turned into a PPV attraction.

I wonder if Hearn really believes that he can turn him into a star or is he just flapping his gums to stay on his good side? If push comes to shove, I wouldn’t be surprised if Hearn favors Callum Smith over DeGale. That’s the guy that potentially has the bigger chance of becoming a PPV attraction in the UK than DeGale. Think about it. Who will the British boxing fans be more willing to pay to see – DeGale or Callum Smith? I don’t care how many guys DeGale beats, I don’t see him ever becoming a PPV attraction in the UK. Heck, he would have lost to Andre Dirrell if not for the two knockdowns he scored in the 2nd round. DeGale looked dreadful against Lucian Bute and Rogelio Medina in his last two fights.

“This is a defining fight for James DeGale,” said his promoter Hearn. “Callum Smith gets the winner. Don’t be surprised if DeGale wins every round [against Badou]. There isn’t a style where you can say that style does well against James DeGale. If you’re a technical boxer, he can work it out. If you’re a guy that comes forward, he can do really well. He’s a chameleon. He doesn’t exactly have a style. He can fight on the inside. He can box against the ropes. He can do everything. I don’t think Badou Jack has the skills to best James DeGale. I really don’t. I want to make him [DeGale] a pay-per-view star in the UK. I think the fights that are out there and the skills that he has and the belts that he would have, he can do it easy and he can have much more money than he’s making here [in the U.S]. Let’s get those belts. Let’s get James DeGale back to London for those big UK fights,” said Hearn.

Hearn said this to Fighthype.com about his belief that DeGale easily beats Jack tonight:
Speaking about DeGale’s fight against Jack tonight on Showtime Championship Boxing, Hearn said, “I think he can knock him out. I don’t think he’ll lose many rounds. The only way he loses rounds is if he switches off. I don’t think Badou Jack has the skills to live with James DeGale,” said Hearn.

I don’t believe for a second that DeGale can win every round against Jack. If he couldn’t win every round in his last fight against the mediocre Medina, then how in the world is DeGale going to beat an even better fighter than him in Jack. I can understand why Hearn wants/needs DeGale to beat Jack, but he’s not going to change reality by putting his own wishful spin on tonight’s fight. Hearn is talking to the wrong people if he believes that.

The boxing fans aren’t the judges. Those are the ones who will decide who the winner and loser of the fight is. I just hope the judges get the decision correct, because I thought they messed up with DeGale’s fight against Bute in giving him 12 round decision win in a fight that looked more like a draw to me. The judges need to get the decision right tonight, because it would create a huge stink if the wrong fighter gets his hand raised at the end of the fight. Forget about a knockout, Hearn, because the only guy that has a chance of scoring a knockout in this fight is Badou, not DeGale. A slapper like DeGale has no chance of knocking out a guy with a steel-chin

IBF welterweight champion Kell Brook, who is also promoted by Hearn, said this about this to Fighthype.com about his thoughts on the DeGale vs. Jack fight:

“I see it being 12 rounds,” said Brook about the DeGale-Brook fight. “I see it being a very technical fight. I think DeGale [wins]. He has a better chance.”

Since Brook is with the same promoter as DeGale, I can’t buy into his opinion on the fight. If Brook went against the grain and picked Badou Jack as the winner, then I would think he’s telling it like it is. But with Brook picking a fighter from his own promotional company, I don’t believe that’s his real thoughts on the fight.