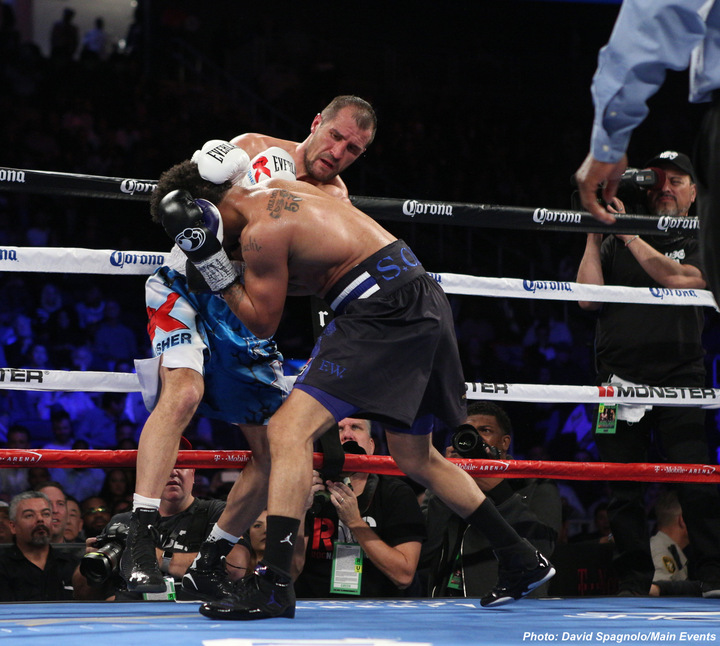 By Allan Fox: In response to Floyd Mayweather Jr. saying this week that he didn’t see Andre Ward as the winner of his fight against former IBF/WBA/WBO light heavyweight champion Sergey Kovalev in their fight on November 19, Ward took to social media to fire back at Mayweather. Ward told Mayweather that he shouldn’t be a critic, and he doesn’t see it as a good look for him to be doing that.

Mayweather seems to pride himself in giving his unvarnished opinion about fighters. If he believes that they’re lacking in some area of their game or in their career development, he tells it like it is by giving his opinion.

It looks like the 32-year-old Ward didn’t like hearing it from Mayweather about his win over Kovalev. Ward won what many boxing fans believe was a gift 12 round unanimous over Kovalev in their fight on November 19 on HBO pay-per-view at the T-Mobile Arena in Las Vegas, Nevada. Ward was knocked down in round 2, and appeared to lose five of the first 6 rounds of the fight in the eyes of a lot of fans.

The judges scored almost every round of the second half of the fight for Ward. It looked to some that Kovalev won at least 3 of the last 6 rounds. How the judges could give Ward almost every round in the last half of the fight was confusing to some of the boxing fans and to the media. Ward won by 114-113 score on all three of the judges’ scorecards. They all had it scored the same. Many of the fans had Kovalev winning 9 rounds to 3 and 8 rounds to 4.

Here’s what Ward said on his Facebook about the Kovalev fight:

“Floyd – I’m not taking the bait, but I will say this,” said Ward. “When is it going to stop? How many more people are you going to lash out at? You’re in a position to build up the sport of boxing and the people in it and not tear it down. Especially the younger generation. Be a part of the solution and not a part of the problem. Don’t become another “Critic” the very ones you’ve been fighting your whole career. Especially toward the ones who go through the same things you do. All the lashing out may make headlines, but it’s not a good look bro. We need to choose our words wisely, the people are listening.”

If Mayweather believes that Kovalev did enough to deserve a victory over Ward, then why shouldn’t he be able to tell the boxing media his thoughts? Is it criticizing is you merely say that you thought fighter A should have won over fighter B? I don’t think Mayweather is lashing out at Ward for saying he thinks the judges scored it for the wrong fighter. Mayweather said that he thinks that Ward needs to get a new trainer, because he doesn’t see his existing trainer Virgil Hunter as having the experience to be someone that can help him in a rematch against Kovalev.

Mayweather says he thinks Ward needs to make improvements in his game if he wants to beat Kovalev in the rematch when/if that fight takes place. It’s still up in the air whether there will be a second fight between them though, because Ward has been hinting about retirement.

Here’s what Mayweather said to ESPN.com about his thoughts on the Kovalev-Ward fight:

Mayweather is right about Ward needing to make improvements. If you saw the Kovalev vs. Ward fight, the main thing that Ward was doing was grappling on the inside instead of showing the sweet science and fighting Kovalev. Round after round, Ward would tie up Kovalev and the two would stay stuck in that position, while the referee stood and watched the non-action.

If Ward’s Plan-A for the rematch is to immediately grab Kovalev in the 1st round and start in where he left off in the previous fight by wrestling him, then how is that a game plan? Mayweather didn’t go into specifics about what Ward needs to improve, but I would imagine that he would like to see more actual fighting from him and less wrestling on the inside. I don’t know if Hunter can be blamed for the mauling and smothering that Ward did. I cannot believe that Hunter would have that as a game plan, because it’s not really boxing. It’s just a tactic to tire and stall out a fight. It’s like in basketball before they created a shot clock rule to keep the other team from building up a lead and then stalling out the game by just passing the ball to each other.

In boxing, if you’re just going to tie up your opponent and wrestle for three minutes of every round, it’s not a great game plan unless that’s all you’ve going for you. Mayweather was a master technician in terms of boxing skills during his career. Of course, he would want to tell a fighter that they can do more if all he sees them doing is holding and grappling like we saw with Ward in the Kovalev fight.

Mayweather obviously sees where Ward can improve in his game for the rematch. If all he’s going to do is start in where he left off in round 12 round in the previous fight by immediately attaching himself to Kovalev for more wrestling, then it’s not a good plan for Ward. He can do better. The Ward from 2005 to 2011 would have had different options available to him as far as ring movement, jabbing and landing pot shots. Is Ward now reduced to just holding and stalling out his fights for him to try and win? The referee could have forced Ward to fight Kovalev if he had taken points off for the wrestling, but he just looked like he was having a bad night at the office by letting the wrestling take place without taking charge of the fight.


« Hearn says DeGale could win every round against Jack

Brook: The fans don’t know who Errol Spence is »