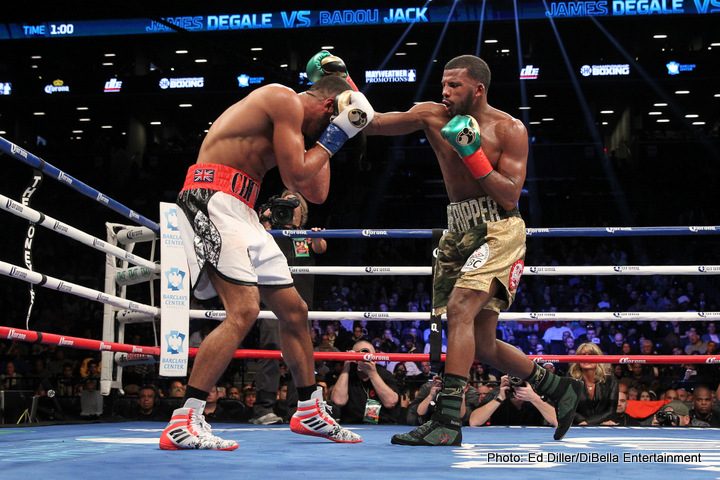 DeGale lost some upper front teeth, and suffered a broken eardrum. DeGale, 30, reportedly was taken to a nearby New York hospital to be checked out after the fight.

“No front teeth, stitches, bust up face but I am still IBF world champion! Love a rematch if not move forward. Thank u all for your support” said DeGale on his social media site.

It looked bad afterwards with DeGale all beat up, blabbering about how he thought he won the fight. It was hard to take DeGale seriously. The guy’s face was puffy and red with both eyes swollen. Jack really gave DeGale a royal pounding in the ring. I still can’t believe the judges didn’t give Badou the win. It seemed like such an obvious win for the hard hitting Swedish fighter. I’m just saying.

DeGale was working REAL hard after the fight was over trying to talk Badou and his promoter Floyd Mayweather Jr. to give him a chance for a rematch. I don’t know that he was able to convince either of them. Badou told DeGale straightaway that if he wants a rematch, it’ll have to take place at 175, because he’s moving up in weight.

Jack has been struggling like crazy to make weight, and he’s just outgrown the 168lb division. Jack looked thin last night like someone that had to diet and drain to get down to a weight that his body can no longer support. In moving up to light heavyweight, Jack will have an extra seven pounds to play with in going from 168 to 175. It’s a smart move.

If DeGale is ready to fight him at 168, then he needs to go for it. However, I think DeGale wants the chance to win the WBC title. He’ll get his chance, but he may need to wait. If Jack vacates his WBC 168lb title, then the World Boxing Council will likely order #1 WBC Callum Smith to face #2 WBC Anthony Dirrell or the vacant WBC super middleweight title. That could potentially put DeGale in with Dirrell in either late 2017 or early 2018. It would be a revenge of the brother type scenario, as DeGale beat Anthony’s older brother Andre Dirrell by a close 12 round decision in 2015 to win the IBF super middleweight title. Anthony Dirrell could avenge the loss. I’d pick Anthony Dirrell to beat Callum Smith if the WBC orders that fight. Smith isn’t polished enough to deal with a puncher with the talent and experience of Dirrell.

The fight was scored 114-112 for DeGale, 113-113 and 113-113. Gilfoid scored the fight for Jack 8 rounds to 4. DeGale knocked Jack down in round 1. In round 12, Jack dropped DeGale. It was very exciting stuff. The draw enabled both fighters to keep their titles. There was talk of a rematch on DeGale’s side, but Badou’s promoter Floyd Mayweather Jr. wants to move him to light heavyweight.

If there is going to be a rematch between DeGale and Jack, it might take some convincing for Mayweather to give the green light to the fight. I’m sure DeGale and his promoter Eddie Hearn would like to stick the fight in the UK in London if they can get it. Would Mayweather agree to a rematch in the UK? I wouldn’t hold my breath if I were DeGale or Hearn. If Mayweather feels his fighter Jack can’t get a break when it comes to decisions, I doubt that he’s going to have him fight in the UK in front of a large crowd of DeGale’s loyal boxing fans. Why would he? Mayweather can move Jack up to light heavyweight and match him against the winner of the Sergey Kovalev vs. Andre Ward fight, and make some good cash from that fight.
DeGale said this to skysports.com about losing his front teeth against Jack:

“He bust my ear drum and I’ve lost my teeth. I don’t know what I’m going to do. I’m still pretty though!” said DeGale.

Well, unless they find DeGale’s teeth to see if a dentist can plant them back into his mouth, I think he’s going to need to see if he can get some false teeth that will stay in his mouth so that he can bite down on his mouthpiece for his fights.

What’s unclear is whether DeGale already had lost his front teeth in the past or if this was him losing the teeth for the first time. DeGale lost his mouthpiece four times in the fight. Did his teeth get knocked out after he lost his mouthpiece on one of those occasions? It’s always risky for a fighter to fight for any length of time without a mouthpiece in his mouth.

“James DeGale rocking a new gown..all checked out at Brooklyn hospital and all good,” said Hearn on his social media site about DeGale.

Many of the boxing fans in attendance went home grumbling about the results of the fight. It looked like Jack had been robbed of a clear win in the eyes of these fans, and you cannot blame them for being irate at not seeing him get the ‘W’ in this Showtime Championship Boxing telecast.

It was an interesting fight. The referee got nailed once after the end of the 4th round by a big right hand from Jack. The shot caused the referee to lose his footing and fall. The referee had a red mark on his cheek from the impact of the punch. Jack’s shots were incredibly hard. You could see that by looking at DeGale’s face after the fight. He was badly lumped up, as if he’d been in a huge war. The thing is, DeGale spent much of the time on his bike in each round. The instance where DeGale was getting hit was somewhat rare. Jack’s punches were just so powerful. They did a lot of damage when they would land.