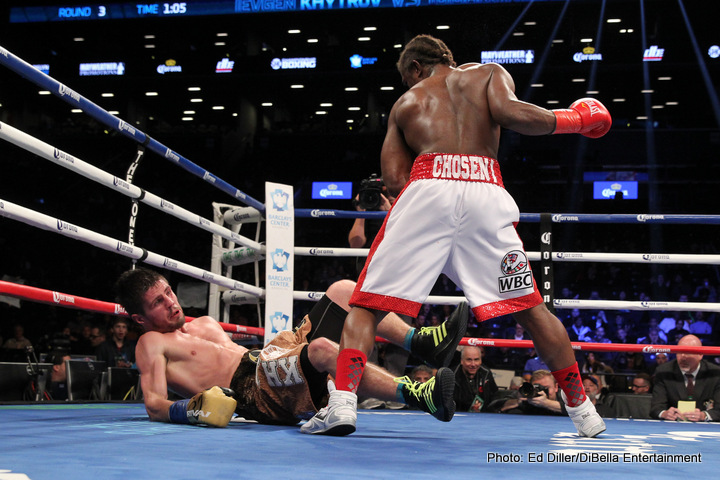 The win for Aleem puts him in striking distance for a title shot against WBC champion Gennady “GGG” Golovkin. Aleems does not ready for a fight against Golovkin. Aleem looked shaky in many rounds against the 28-year-old Khytrov. If not for the Ukrainian fighters’ lack of defensive skills, we would have seen Aleem losing the fight, because he was there to be beaten.

Alleem knocked Khytrov down in rounds 3 and 6. The fight was halted after Aleem flurried on Khytrov after dropping him in round six. Refree Eddie Claudio officially halted the fight at 1:20 of the 6th round. The knockdown came after Aleem hurt Khytrov with three straight right hands to the head. Aleem then landed four consecutive shots to the head of the defenseless Khytrov to put him down on the canvas on his backside. Khytrov got back to his feet, and was nailed with a series of hard shots from Aleem. The referee then stopped the contest as Khytrov sagged against the ropes.

Earlier in the fight, Aleem had Khytrov hurt in round 1 and on the verge of being knocked out. The referee let the fight continue despite Khytrov appearing very hurt. Khytrov wasn’t knocked down, but he looked like he was cose to going down.

To his credit, Khytrov came back to fight well in rounds 2, 4 and 5. Khytrov was getting the better of Aleem in those rounds with his pressure and heavy hands. Aleem did not like getting hit, so he was on the move much of the time. The movement kept Aleem in the fight, because he did not appear to have the chin to be able to stand up to Khytrov in a one on one type of fight.

In round 3, Aleem knocked Khytrov down with a left hook to the head. Khytrov got back to his feet and hurt Aleem with some return fire that had the Virginia native badly hurt at the end of the round. It was an interesting turnaround for Khytrov, because he looked like he was ready to be finished. The fact that he was able to turn the tables on Aleem showed the kind of real punching power that he has going for him. If Khytrov had a little more power, he likely would have finished Aleem off in that round.

Aleem said this via Fight News after the match:

“I stayed focused in there,” said Aleem. “They told us that he would throw a lot of punches. My power was strong early, but I let him gain some confidence after the first round. He caught me a little bit, but only because I allowed him. Once I saw the opportunity, I caught him and knew he was going down. With a fighter who has a resume like that, I knew he couldn’t give him a second chance. I had to finish him off for sure. I’m not scared of any fighter. We want the best out there. Facing the best will only bring the best out of me,” said Aleem.

Aleem was hurt in round 2 from some of Khytrov’s big power shots. Aleem looked like he had gassed out from round 1 from all the punches he’d thrown in the round. He was not able to keep up with that pace, and he didn’t have the chin to stand and fight Khytrov.

Aleem struggled against a very limited fighter in Khytrov. I don’t know if Aleem is ready for the best in the 160lb division. I wouldn’t want to see him fighting Golovkin right now. He would be a sitting duck for everything Golovkin throws at him. Even Curtis Stevens, who is ranked #3 in the World Boxing Council’s ranking at 160, he’d be a lot of problems for Aleem with his punching power. Aleem gets hit too much, and he gets hurt. If a slow puncher like Khytrov was able to hurt him, then Stevens would surely finish him with one of his big left hooks, provided that he doesn’t suffer a hand injury like in his last fight.

Khytrov needs to retool his game if he wants to get back to the top of the middleweight division. He’s not fast of hand or foot, but he has good power. If Khytrov’s training team can fix his poor defensive skills, then he should be able to get past guys like Aleem in the future. Aside from his defensive problems, Khytrov he didn’t look that bad. He fought well and showed a lot of heart to come back from being hurt in rounds 1 and 3 to fight well in the 4th and 5th rounds. Khytrov was giving Aleem all he could handle in the 6th round when he was hurt by a big right hand shot. Khytrov made no effort to block any of Aleem’s shots after he hurt him, which wasn’t that surprising because he wasn’t blocking anything in the fight.

All in all, Aleem vs. Khytrov was the best fight on the card. It was far more exciting than the fight between James DeGale vs. Badou Jack in the main event and the super featherweight match between Gervonta Davis vs. Jose Pedraza in the co-feature bout.

Aleem, 23, needs to get more fights under his belt before he challenges for a world title. Winning the WBC Silver middleweight title is a nice feather in his cap, but it doesn’t mean that he’s going to be able to compete with a good fighter like Golovkin. Still though, Aleem is going to need to make his move soon to fight for a world title, because with fighters like Jermall Charlo on his way up to middleweight in the near future, Aleem isn’t going to have a lot of time. Charlo would be a lot of problems for Aleem if the two of them were to face each other.