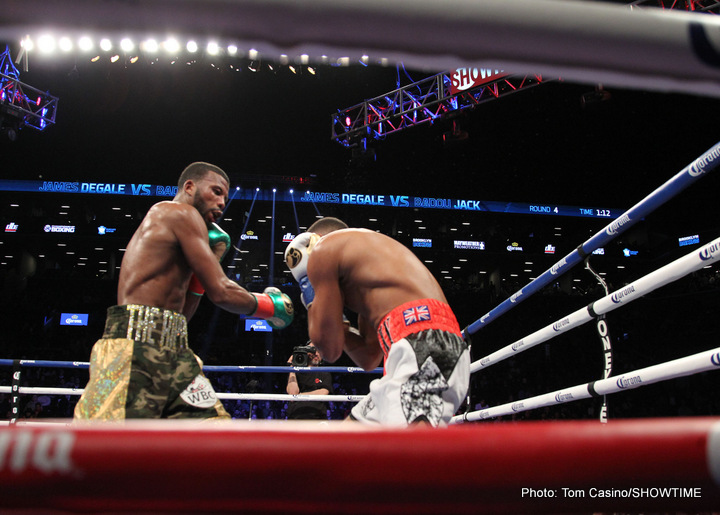 By Eric Baldwin: Floyd Mayweather Jr. says his fighter WBC super middleweight champion Badou Jack (20-1-3, 12 KOs) will be moving up to light heavyweight for his next fight to challenger WBC 175lb champion Adonis Stevenson in June. Mayweather says that a rematch between Jack, 32, and IBF super middleweight champion James DeGale (23-1-1, 14 KOs) can take place, but it will need to take place in the light heavyweight division, because that’s the weight class Jack is moving up to.

DeGale and Jack fought to a 12 round draw last Saturday night at the Barclays Center in Brooklyn, New York. Mayweather is not happy about the draw, as he thought that his fighter Jack won the fight EASILY.

The judges saw the fight differently, scoring it 114-112 for DeGale, 113-113, and 113-113. Mayweather says he doesn’t think he’ll be coming back to have fights on the East Coast any longer, because he’s not happy with the results of the fight.

Overall, Mayweather was very pleased with the other fights on the card, but just the main event involving Jack. Mayweather feels that Jack has gotten a raw deal in his last two fights. Both were draws. Jack fought to a 12 round draw last April against Lucian Bute in Washington, DC.

“I think we need to get some young judges,” said Mayweather. “How am I feeling? I don’t really want to come back and really fight on the East Coast anymore. This is not right. The boy [DeGale] know he lost. He didn’t come in here. Fighters come in press conferences all the time, and then go to the doctor. The fight wasn’t close. Me and Badou Jack already communicated. The goal was to fight this fight, and then move up to light heavyweight. Badou Jack is a big super middleweight. The thing is this is boxing. If they can’t get it right the first time, they ain’t going to get it right the second time. We don’t need a second time around. We’re not going to be like the other promoters and pay the judges off. We’re looking to a Badou Jack vs. Adonis Stevenson. I know Canelo has got the date in May. Around June, the beginning or the end, we look forward to the end of June [for Jack vs. Stevenson fight]. I’m not here to knock James DeGale. Do I want to sign him? Absolutely, but I don’t think he won? No. Will Badou Jack and James DeGale fight again? Yes, but at light heavyweight. He can make 168, but he’s a big 168. It’s time for Badou Jack to move up to the net weight class,” said Mayweather.

DeGale put Jack on the canvas in the 1st round, but Jack came back to score a knockdown in round 12 to get a draw. The positive thing for Jack is he kept his WBC title due to the fight being a draw. However, Jack and Mayweather would have much preferred a win out of the fight. Jack is moving up in weight to 175 anyway, so a draw doesn’t help him move his career along. He needs wins.

Stevenson, 38, is reportedly in negotiations with Joe Smith Jr. for a title defense against him. Stevenson is supposed to be facing his mandatory challenger soon, because he hasn’t made a defense against his mandatory since 2013. That was four years ago. Whether the World Boxing Council will allow Stevenson to fight Jack in June or not is unknown. What is known is Mayweather seems very confident that he’s going to be able to make the Jack vs. Stevenson fight next.

“I’ve got huge respect for this man,” said DeGale to skysports.com about Jack. “He showed he’s tough, he’s durable, he’s skillful – you the man. I thought I won that. I threw the cleaner shots. He said he was going to outbox me. I was moving my feet, picking his head off. Listen, let’s do it again. Let’s do it again.”

If DeGale’s promoter Eddie Hearn can come up with a lot of money to get Jack and Mayweather to change their minds about moving up to light heavyweight, then it’s possible, but I don’t know if that’s possible. DeGale isn’t a big name in the UK despite him being a world champion and 2008 Olympic gold medalist. DeGale isn’t a pay-per-view attraction in the UK like IBF heavyweight champion Anthony Joshua. DeGale vs. Jack II wouldn’t be a PPV worthy fight in the UK.

Without PPV, there’s no money to lure Jack and Mayweather for a second fight. They can make good money by fighting Adonis Stevenson for his WBC light heavyweight title in Montreal, Canada. Stevenson is a big name over there. It would be a really difficult fight for Jack though, because Stevenson is a big punching southpaw with fast hands. He’s a lot tougher than DeGale. Stevenson is up there in age at 38, but he’s not yet started showing signs of his boxing skills deteriorating. Jack looked slow against DeGale last Saturday night in terms of hand speed. Stevenson is even faster than DeGale, and with a lot more punching power.

If Jack can handle Stevenson’s power, then he’d have a chance of beating him, but it’ll still be a very hard fight for him because of Stevenson’s punching power and his boxing ability. Jack might be better off trying to get the winner of the Andre Ward vs. Sergey Kovalev II fight. Ward doesn’t seem to have much left in the tank as far as his offensive skills. He’s pretty much limited to just his wrestling at this stage of his career. Jack might be able to win a decision against Ward. Beating Kovalev might be a tougher task for Jack if he’s the one that winds up with the three titles.

“Let’s do it again at light-heavyweight,” said Jack. “He was doing a lot of running,” said Jack. “I thought I won the fight. I finished stronger. His knockdown was a flash knockdown.”
I don’t think DeGale wants any part of fighting at 175, because is focus is on winning the WBC title so that he can unify the super middleweight division. If DeGale fights Jack at light heavyweight, he won’t be able to fight him with the WBC 168lb title on the line.
“Come to London,” said DeGale. “He hit me, but I was more off balance. I was kind of hurt, but I’ve got to give him respect. I’ve always respected him. He’s a good all-round fighter. I’m willing to do it again, but all respect to him.”

DeGale didn’t look like he was off balance when he was knocked down in round 12. DeGale looked hurt. He got back up, and he wasn’t at full power for a while after that. DeGale did come on in the last seconds of the round, but the damage was done. Jack had knocked him down and scored a 10-8 round. You can argue that the round should have been scored a 10-7 round, because DeGale spit out his mouthpiece in the round. That was the 4th time that DeGale had lost his mouthpiece in the fight. He was well overdue for a point deduction for that. I’ve never seen a fight in which a fighter loses his mouthpiece 4 times and wasn’t penalized.

DeGale did a lot of moving around the ring. He did not look like he wanted to mix it up much of the time. It was only in the last four rounds of the fight where DeGale finally started to be stationary. The only reason he did that was because he was tired. The combination of his own movement and Jack’s hard body shots seemed to sap the strength. DeGale said that he lost some teeth and suffered a busted eardrum in the fight, but that’s not excuse for him struggling. He struggled because of Jack’s pressure and crisp punching.

It’ll be surprising if Mayweather can line up a fight against Stevenson in June. The one thing that Mayweather has going for him though is that Stevenson is with Al Haymon, who Mayweather works with. If Mayweather can get Haymon to put the fight together, then the boxing world will see Jack face Stevenson next rather than DeGale. I think it’s a bigger fight for Jack to fight Stevenson than facing DeGale once again. DeGale did a lot of spoiling in the fight, and it wasn’t a great fight to watch. Jack had to cut off the ring on DeGale in most rounds in order to force the British fighter to fight him. DeGale didn’t want to do that, especially after he started to feel the big power shots from the Swedish fighter.

Canelo’s Plan-B was Saunders if Chavez Jr. fight not happened »