Canelo’s Plan-B was Saunders if Chavez Jr. fight not happened 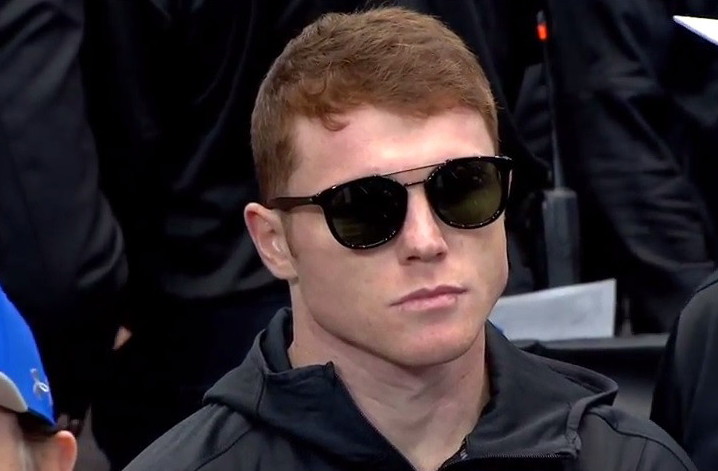 By Dan Ambrose: Golden Boy Promotions planned on matching Saul Canelo Alvarez against WBO middleweight champion Billy Joe Saunders if the negotiations between him and Julio Cesar Chavez Jr. hadn’t been successful for their May 6 fight on Cinco de Mayo on HBO PPV. Golden Boy was reportedly in negotiations with Saunders (24-0, 12 KOs) promoter to have him as Canelo’s opponent on May 6.

The fight would have given Canelo (48-1-1, 34 KOs) the chance to pick up the WBO 160lb title, which he and Golden Boy wants. Fortunately for Canelo, Golden Boy was able to negotiate the fight with the former WBC middleweight champion Chavez Jr. (50-2-1, 32 KOs). The Canelo-Chavez Jr. fight will take place at the T-Mobile Arena in as Vegas, Nevada.

Golden Boy Promotions president Eric Gomez said this to ESPN.com about Saunders being the Plan-B for Canelo if Chavez Jr. hadn’t agreed to the terms of the negotiations:

“Obviously, Saunders was there,” Gomez said. “We had discussions. Canelo became mandatory for that title. [Former middleweight titlist] David] Lemieux was interested in fighting Canelo as well. But this is the fight Canelo wanted and the one [Golden Boy CEO] Oscar [De La Hoya] wanted as well. This fight transcends weights and championships. It’s probably the biggest fight in Mexican history.”

Canelo hasn’t fought Jermall Charlo at 154, and his win over Erislandy Lara from 2014 was a very controversial one. Canelo’s habit of fighting at catchweights at 155, and his glacial move to fighting at the full weight of 160 for middleweight, it makes him not look like a great fighter. Chavez Jr. has been largely inactive for the last five years of his career. Chavez Jr. was once an active fighter up until 2012, but he’s fought seldom since then. Canelo vs. Chavez Jr. might be the biggest fight in Mexican history when it’s all said and done when it comes to money, but it won’t be the best as far as the most talented Mexican fighters. Chavez Jr. is flawed and so is Canelo.

Golden Boy Promotions was able to get Chavez Jr. to agree to a catchweight of 164.5 pounds in order for him to be given the Canelo fight. You can imagine Chavez Jr. and his management resisted that weight vigorously. Chavez Jr. hasn’t fought between 164 since his fight against Sergio Martinez in 2012. Moreover, Chavez Jr. has failed to make the 168lb limit in several of his fights in the last four years.

Golovkin is expected to be the one that Canelo fights next later this year if he beats Daniel Jacobs on March 18 and Canelo wins his fight against Chavez Jr. Canelo has the much easier task in front of him in only needing to beat Chavez Jr. instead of someone dangerous like Jacobs. If Canelo had to face Jacobs instead of Chavez Jr, a lot of boxing fans would have a lot of questions about whether he can win that fight. Golovkin vs. Canelo will take place only if Golden Boy wants the fight to. It might not be Canelo’s next fight after Chavez Jr. We’ll find out how badly Golden Boy wants the fight if they agree to give Golovkin the percentage split that his promoters are asking for.

Fighting Chavez Jr. at a catchweight of 164.5lbs is seen by Golden Boy Promotions as the proper preparation for the Golovkin fight. Chavez Jr. doesn’t fight like Golovkin at all, and he’s more of a light heavyweight at this point, who boils down to fight at 168. The fact is Chavez Jr. has only been able to make the weight for the super middleweight division twice in his five fights since moving up to super middleweight in 2013. That’s just 2 out of 5 fights. With Chavez Jr. unable to make even the 168lb limit, it suggests that he’s really a light heavyweight at this point in his career.

Chavez Jr. doesn’t match up well against the top fighters at 175, because his punching power hasn’t carried up with him to that weight class. But it’s going to be hard for Chavez Jr. to get down to 164.5lbs for the weight limit, and to avoid the $1 million per pound weight penalty for the fight. Chavez Jr. really struggles just to get down to 170.

It’s going to be really tough on him to get down even lower to make the 164.5lb limit. Golden Boy insisting on the catchweight at that weight is just one more safeguard that they’re using to make sure that Canelo wins the fight. Canelo doesn’t need a catchweight to beat an inactive fighter like Chavez Jr. in my opinion. If this was 2012, then I’d agree that a catchweight would be important for Canelo. Back then, he wasn’t as big as he is now, and Chavez Jr. was still in his prime and fighting on a frequent basis. Things have changed a lot since then.

“It’s a bigger guy, he’s right-handed and not a guy who will box or run,” Gomez said about the 6’1” Chavez. “I think it prepares [Alvarez] very well [for Golovkin]. It’s not a similar style to GGG because GGG is a better boxer, but Chavez is a bigger guy in front of him who will be throwing bombs.”

Chavez Jr. is four inches taller than the 5’9” Canelo, and has a three inch longer reach than him as well. That normally would be a real problem for a fighter like Canelo if he were facing someone like Jermall Charlo, Daniel Jacobs or Demetrius Andrade, but Chavez Jr. gives up his height in his fights by brawling on the inside like his much smaller famous father Julio Cesar Chavez.

Despite having huge size, Chavez Jr. never learned how to fight on the outside to take advantage of his height and reach. That’s why Chavez Jr’s size advantage over Canelo will be meaningless. It’s not going to help him, because he’s probably going to be fighting in close. If Chavez Jr’s training team is smart, they’ll have him focus on fighting on the outside during training camp, but I doubt that he’s going to be able to change his basics fighting style of brawling on the inside in just one camp. Chavez Jr. is too old for him to change all of a sudden.

Chavez Jr. does have a chance of beating Canelo if he can get the better of him on the inside with his power punching. But for Chavez Jr. to do that, he’s going to need to be able to take a lot of big punches from Canelo. He’s also going to need to show better stamina than he did in his last fight against Dominik Britsch.

If Canelo starts getting worked over by Chavez Jr, then he’s going to get on his bike and try and beat him by jabbing and moving a little. Canelo is capable of doing that when he needs to. Chavez Jr. will need to train for every survival trick Canelo and his team can come up with for this fight if they want to best him.