Fres Oquendo vs. Shannon Briggs expected to be announced shortly 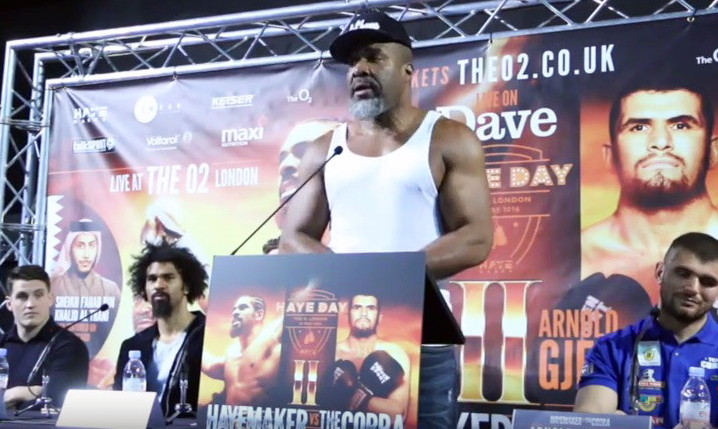 By Dan Ambrose: A fight between #5 WBA Fres Oquendo and #4 WBA Shannon Briggs (60-6-1, 53 KOs) is expected to be announced soon, according to Fight News. It is believed that they would be fighting for the vacant World Boxing Association title. Browne was going to fight Oquendo for the WBA title, but he was out with an injury.

Briggs hasn’t fought since May when he defeated Emilio Zarate by a 1st round knockout on the undercard of David Haye’s fight against Arnold Gjergjaj. Briggs was hoping that he would get a fight against Haye if he fought on his card.

Haye instead opted to fight cruiserweight Tony Bellew on March 4 on Sky Box Office PPV. It’s now unclear if Haye will ever fight Briggs. Perhaps if Briggs wins the WBA title, he might. Briggs spent a lot of time in 2016 chasing after Haye trying to get a fight against him. It’s unfortunate that Briggs now has nothing to show for all his trouble.

Briggs only fought once in 2016, and that’s bad news for someone his age at 45. When you get that old, you would like to ideally stay active as much as possible. It’s already bad that Briggs has fought nothing but poor opposition since launching his comeback in 2014.

Briggs has won 10 fights during that time frame, but they’ve all been against weak 2nd tier fighters with little boxing skills and not much in the way of talent. The only positive thing you can say that Briggs has going for him is he would be facing a guy with even more ring rust themselves in 43-year-old Oquendo, who has been out of the ring for ages.

Oquendo is about to turn 44 in April, and he hasn’t fought in 2 ½ years. That’s a long time for someone to be out of the ring and then getting a title shot. Oquendo lost his last fight to Ruslan Chagaev in July 2014. The last time Oquendo won a fight was against journeyman Galen Brown in May 2014. The last significant win for Oquendo was against high level journeyman Derric Rossy in 2013.

The Oquendo vs. Briggs fight is a toss-up type of fight. If both guys were in their primes, then maybe Briggs would win. It’s hard to say though, because even in Briggs’ prime, he was struggling against old guys like George Foreman in beating him a controversial decision. This was a prime Briggs. Foreman looked like the better fighter at age 46. Briggs was obviously a limited fighter even in his best years.


« Ricky Burns vs. Julius Indongo in the works

Bellew thinks Haye will quit against him »