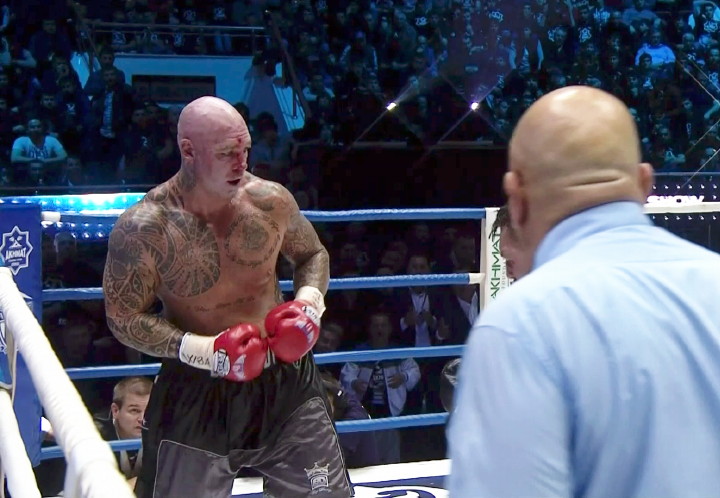 By Eric Baldwin: In what could be terrible news for #3 WBA heavyweight contender Lucas “Big Daddy” Browne (24-0, 21, he’s reportedly allegedly tested positive for a second random drug test for 2016, which makes it highly unlikely that he’ll be able to fight #5 WBA Shannon Briggs (60-6-1, 53 KOs) for the vacant World Boxing Association title.

It’s unknown if Browne will get a chance to have another sample tested to prove that he’s clean. The Browne team has yet to speak on the alleged positive test results for the banned substance.

ESPN is reporting that the 37-year-old Browne has allegedly tested positive for during a random drug test in his home country of Australia by Voluntary Anti-Doping Association (VADA) for the banned substance ostarine [AKA enobosarm]. According to ESPN, Ostarine is a drug that supposedly helps increase stamina for athletes. Ostarine is a banned substance with the World Anti-Doping Agency.

Browne and the 44-year-old Briggs were supposed to be facing each other for the vacant WBA heavyweight title. It was a golden opportunity for Browne to capture the belt, as Briggs is very old and likely beatable. The WBA could have ordered Browne to fight #7 WBA David Haye, and that would have been a real tough fight for him.

Heavyweight contender Lucas Browne, due to fight for a vacant world title, has failed his second random drug test of the year, likely killing his chances to fight for the belt and putting his career in jeopardy.

“We have been notified by VADA about Browne’s adverse finding as he was tested under the CBP,” WBC president Mauricio Sulaiman said to ESPN. “He has been notified, and the process is being attended as per the protocol.”

It’s going to be interesting to see what happens from here. Browne previously tested positive earlier this year for the banned substance clenbuterol following his 10th round knockout win over WBA champion Ruslan Chagaev on March 5 in Grozny, Russia. The positive test results for clenbuterol resulted in Browne being suspended for six months.

Browne said that his food or drink was contaminated while he was in Russia. The WBA later ruled that Browne hadn’t intentionally used the banned drug. They then put him position to fight Briggs for the WBA ‘regular’ heavyweight title.

The WBA also stripped Browne of his heavyweight title. However, they gave him a break by ordering him to fight Shannon Briggs for the same time after Chagaev was stripped of the WBA title after failing to pay the sanctioning fees they were asking from him.

Browne and Briggs were ordered by the WBA to face each other by December 31 for the WBA title. The two heavyweights still hadn’t scheduled the fight or the location of the fight. The winner of the Browne-Briggs fight was supposed to face 43-year-old Fres Oquendo (37-8, 24 Kos). He’s currently out with a shoulder injury and not available to fight right now.

It’s unknown what happens now with Browne. If the WBA decides to suspend Browne, then presumably Briggs will be fighting the next available to contender for the vacant WBA ‘regular’ title. That would be #7 WBA David Haye. That would be great news for Haye if he got the option of fighting Briggs for the WBA title. Whether Haye would be interested in facing Briggs is another question. The boxing fans would like to see Haye fight for a world title, but there would be a certain amount of risk involved in Haye fighting a big puncher like Briggs.

Haye has talked recently about wanting to fight WBC cruiserweight champion Tony Bellew in a fight in the heavyweight division. Haye would like to fight IBF champion Anthony Joshua. The question is does Haye go for the easy option of fighting Bellew and then wait on the Joshua fight to come around in the near future or does Haye take a risk and fight Briggs for the vacant WBA ‘regular’ title? It would help make a future fight between Haye and Joshua a bigger fight if Haye came into the fight with him already a world champion rather than being a contender with a lot of easy wins over weak opponents. You have to consider Bellew an easy fight for Haye because Bellew isn’t a heavyweight. He’s a cruiserweight that is easy to hit.

What will happen with Browne’s career if it turns out that he did test positive for the banned substance ostarine is the big question? Does Browne get suspended again for six months or does he get a longer suspension. Do the sanctioning bodies remove him from the top 15? If so, it could take the 37-year-old Browne a long time to work his way back to a title shot. It would be hard to imagine Browne getting a voluntary defense for a title. He might have to work his way to a No.1 spot, and that could take a long time unless Browne gets a big fight against a top contender and beats him.