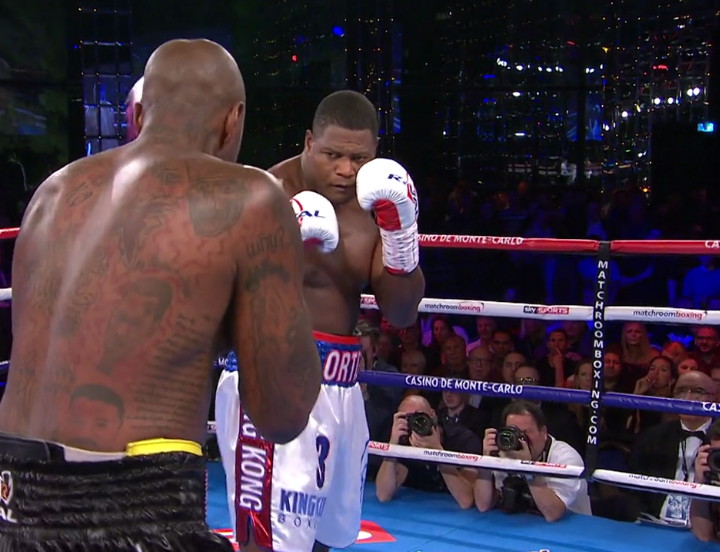 Hearn said this to IFL TV about Ortiz getting the fight with Briggs:

As bad as Ortiz looked in his last fight, I could see him losing to the 44-year-old Briggs if the WBA orders the two of them to fight. Although Briggs is seven years older than Ortiz, I see them both around the same age. I don’t think Ortiz has any kind of real youth advantage over Briggs. The power of the two 6’4” heavyweights is pretty close. I think Briggs is maybe a little more powerful than Ortiz.

Brigg’s definitely a better body puncher than Ortiz. The boxing skills of the two are pretty close as well. I think Ortiz can do more things at times. I didn’t see much variation in Ortiz’s last fight against Malik Scott compared to in his fight against Bryant Jennings.

Ortiz was showing a lot of different boxing styles in the Jennings fight. But against Scott, Ortiz was plodding after him in a real slow and lethargic manner that suggested a fighter in his 40s rather than a guy about to turn 38.

Hearn needs to decide whether it’s worth it or not to stick Ortiz in with Shannon Briggs, because he is his fighter. If his main thing is he wants to build Ortiz up so that he can feed him to Joshua to get him a win over an unbeaten but badly flawed fighter, then he needs to keep him away from Briggs.

There would be some risk involved if Hearn were to stick Ortiz in with Briggs, because he can punch. Briggs will stand his ground against Ortiz and look to take him out with heavy shots. What makes Briggs so dangerous for a guy like Ortiz is he has a chin. Briggs can take huge shots and fire back with his own. We don’t know what kind of chin Ortiz has as a pro.

I’ve seen Ortiz get hurt when he was in the amateur ranks, but he’s been fine as a pro. Ortiz was hit cleanly by Malik Scott a few times in his last fight. If Briggs is able to stick around for a long time against Ortiz, I wouldn’t be surprised if he knocked him out. With a loss to Briggs, Ortiz would put Hearn in a situation where he wouldn’t be able to match him against Joshua straightaway. Hearn would need to go through the trouble of rebuilding Ortiz slowly. It would definitely take some time, and who knows whether Ortiz would be able to keep from getting beaten again.

The question is does the WBA let Hearn slide his chess piece Ortiz into the spot where Lucas Browne previously was for the Briggs fight or does the WBA wait on the full investigation on Browne’s positive drug test? The investigation could drag out for a long, long time. I hope Hearn isn’t counting on a speedy decision made by the World Boxing Association concerning Browne, because I wouldn’t be surprised if this thing is still being in 2017.

Hearn needs to find an opponent for Ortiz to fight next month, because he’s fighting on December 10 and he still doesn’t have anyone scheduled for the Anthony Joshua vs. Eric Molina card at the Manchester Arena in Manchester, England. Ortiz is part of the Sky Box Office pay-per-view card. It’s just kind of sad that Ortiz still doesn’t have an opponent despite the fact that the card is less than three weeks away.

Ortiz recently fought this month in beating Malik Scott by a 12 round unanimous decision. It was Ortiz’s debut fighting for Hearn’s Matchroom Sport stable after he recently signed the former Cuban amateur. Ortiz had been signed with Golden Boy Promotions before that. He left them and is now with Hearn, who is talking about wanting to match him in the near future against IBF heavyweight champion Anthony Joshua.

Hearn wanted to build Ortiz up in the UK boxing public by putting him in with Malik Scott. The idea was that Oriz would look good in beating Scott, and that would help create interest from the fans in the UK for a Joshua vs. Ortiz fight. Unfortunately,

Ortiz struggled in beating Scott, even though he won a one-sided 12 round unanimous decision. Ortiz looked old against Malik, and was slow on his feet and unable to cut off the ring on him to score a knockout. Younger more mobile heavyweights likely would have had no problems cutting off the ring on Scott to score a knockout. Ortiz couldn’t do it though, as he was way too slow on his feet. I don’t think Ortiz would have knocked Scott out even if it were a 15 round fight from the past. Ortiz just does not have fast feet.