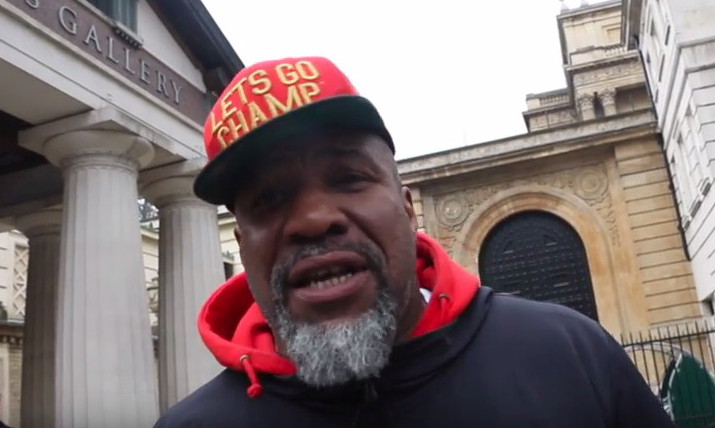 By Scott Gilfoid: Shannon Briggs (60-6-1, 53 KOs) is saying that he’ll be fighting former WBA heavyweight champion Lucas “Big Daddy” Browne (24-0, 21 KOs) for the vacant World Boxing Association title next. This is the WBA title that Tyson Fury recently vacated along with his WBO strap.

If the news turns out to be true, it would be pretty shocking considering how many arguably more talented heavyweights there are in the WBA’s top 15 rankings than those two guys. The 44-year-old Briggs is ranked is ranked #8 by the WBA despite the fact that he’s not beaten anyone remotely close to being a contender since launching his two-year comeback to the sport in 2014.

The 37-year-old Browne is ranked #5 by the WBA, and he’s not fought since last March when he stopped WBA World heavyweight belt holder Ruslan Chagaev in the 10th round in a come from behind victory. Browne was on his way to losing that fight at the time.

“BREAKING: WBA to order Shannon Briggs and Lucas Browne to fight for Tyson Fury’s vacated WBA world heavyweight title,” Briggs said on his Instagram account on Saturday.
Until the WBA makes a public statement to confirm the news that Briggs is talking about, I’m going to remain skeptical about its validity.

Browne is a shaky fighter to be battling for a heavyweight title. Even against a 44-year-old Briggs, I would be very surprised if Browne won that fight. Briggs is a huge body puncher, and Browne hasn’t had to fight anyone like that during his seven-year pro career. Even in his fight against 39-year-old journeyman Julius “Towering Inferno” Long last year in August, Browne was taking a lot of punishment and appeared to be hurt in one instance. Briggs is unquestionably a better fighter than Long, so I wouldn’t be surprised if he knocked Browne out.

Former heavyweight champion Wladimir Klitschko was hoping he would be the one fighting for the vacant WBA title against IBF champion Anthony Joshua in a fight that they were talking about taking place on December 10th. However, the WBA failed to sanction their fight and Wladimir ended getting injured, so there was no chance of him and Joshua facing each other in December.

Wladimir will be still fighting Joshua in early 2017, possibly in March. However, it looks like the WBA title won’t be on the line when that fight does take place. I Wladimir chooses to not face Joshua until there’s more than one title on the line, then he could wind up waiting for a long time, because it might not be easy for Joshua to get a crack at the WBA or WBO belt anytime soon.

Briggs wanted to fight former two division world champion David Haye (28-2, 26 KOs). Briggs fought on Haye’s undercard last May and destroyed journeyman Emilio Zarate in the 1st round. However, Haye chose not to fight Briggs. Haye hasn’t said who he plans on fighting, but it may end up being another fringe contender of limited talent like the last two obscure bottom feeders that he faced in his comeback.

Haye said that a fight between him and Briggs would need to be on pay-per-view for it to be a money fight, and the only way that can happen is if he becomes a world champion first. Haye believes he’ll be a world champion by 2017. It remains to be seen whether that’s realistic or not, because Haye failed miserably the last time he fought for a world title in 2011 in a one-sided 12 round decision loss to Wladimir. Haye has fought nothing but weak opposition since then in beating Dereck Chisora, Mark De Mori and Arnold Gjergjai.

It would look bad on the WBA’s part if they were to keep their WBA heavyweight title vacant until Joshua and Wladimir fight in March of 2017. That’s too long, and there are other guys that should be given the chance given the injury that Wladimir sustained. It’s no good to him the belt sitting vacant all that time if there’s other guys that can fight for it, although I don’t think Browne and Briggs are the best contenders that should be fighting for the belt.

There’s got to be other guys that can fight for it such as Luis “King Kong” Ortiz. How about Ortiz vs. Browne> I think that would be a swell fight, and one worth putting together. That’s not to say that I don’t believe that Briggs can beat Browne. I just think he hasn’t done anything to deserve a title shot given the low level of his opposition in the last two years. Briggs has been fighting nothing but obscure fighters that most casual boxing fans have never heard of in their life.

The 6’5” Browne would be considered the favorite to defeat Briggs if the fight happens between them, but it doesn’t matter. Browne is a flawed fighter and vulnerable as heck. Browne has been taking on the same type of weak opposition that 21-year-old Hughie Fury has been facing apart from his fight against the 38-year-old Chagaev. It’s impossible to predict in any real way a victory for Browne over a guy like Briggs. If Browne can’t hurt Briggs with anything, then it would mean that he would need to take his punishing body shots for the entire fight, and I just don’t think Browne will be able to take those kinds of shots without dropping for the 10 count.

Briggs will need to take advantage of his title shot against Browne if it takes place, because I don’t see him getting another one. I just don’t see it happening without Briggs facing top tier opposition. You can argue that Briggs doesn’t deserve to be ranked at #8 by the WBA given the low level fighters he’s faced during his comeback. The WBA has Briggs ranked above Joseph Parker, David Haye, Jarrell Miller, and Kubrat Pulev. I don’t there are too many boxing fans that would agree with that ranking.