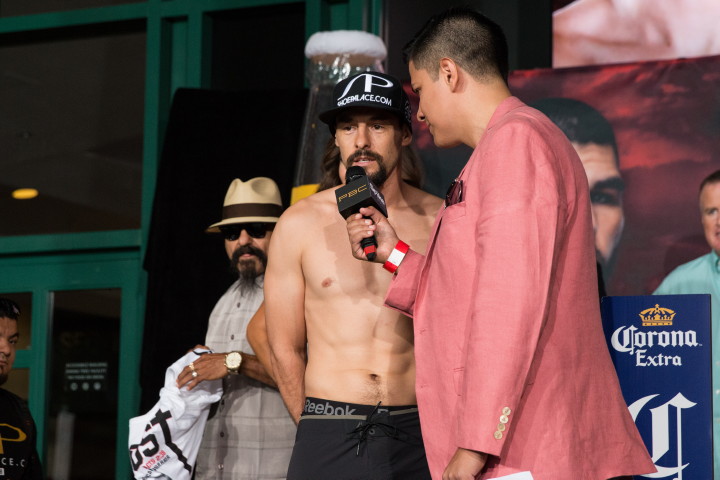 By Patrick McHugh: Robert “The Ghost” Guerrero (33-4-1, 18 KOs) will be facing David Peralta (25-2-1, 14 KOs) tonight in a crucial 12-round fight that could either breathe new life into his sagging career or finish him off for good on Premier Boxing Champions on Spike TV from the Honda Center, in Anaheim, California. #13 WBC Guerrero has been entertaining thoughts of a rematch against WBC welterweight champion Danny Garcia.

For Guerrero to eventually get that rematch with Garcia, he’s going to need to win all of his fights from this point on. Garcia might wind up losing to someone eventually, but he’s probably not going to want to bother fighting Guerrero again unless he’s winning and looking good.

Tonight’s fight between Guerrero and Peralta starts at 9:00 p.m. ET/6:00 p.m. PT. It’s not a great fight for Guerrero, as Peralta, 33, is not that good of a fighter. However, might not need to be that good for him to beat Guerrero, because “The Ghost” has lost a lot from his game from the fighter that he was four years ago. Peralta was recently beaten by Cristian Nestor Romero (14-7-1) last year in April.

Peralta has also had problems in fighting to a draw against Segundo Ariel Senteno (7-4) in September 2014 and losing to Claudio Alfredo Olmedo. As you can see, it doesn’t take a talented fighter to give Peralta problems. This means that Guerrero should win this fight despite him being on the downside of his career.

“Peralta is a tall guy but I’m used to it. Kamegai was bigger than I thought he’d be, but I handled it. I have to feel him out and go from there,” said Guerrero. “I’m going to try and execute my game plan. We want to put pressure on him. I’ve had really good sparring for this and I’m ready to go.”

Guerrero did not handle his fight against Yoshihiro Kamegai very well in 2014. Guerrero won the fight by a 12 round decision, but he took a real battering from the Japanese fighter. Kamegain was a real contender, albeit a fringe contender. Peralta is just a 2nd tier fighter without anything to distinguish him other than losses to lower level opposition. He’s known for his losses more than his wins.

Not too many fighters are able to do that and still have success. Guerrero has never enjoyed the same success in the 147lb division as he did at featherweight unfortunately. Since moving up to welterweight, Guerrero has won four fights and lost three. His wins came against Andre Berto, Selcuk Aydin and Aaron Martinez. Guerrero’s losses have come against Danny Garcia, Keith Thurman and Floyd Mayweather Jr. Guerrero says he’d like to fight Manny Pacquiao, but that obviously not going to happen with him losing half the time and him not being signed to the same promotional company as Pacquiao at Top Rank.

“I’m ready for a world title shot now. I want the Danny Garcia rematch. I feel like I won the fight. He had some flashy shots but he didn’t want to fight. It is what it is and it motivates me to get back to that position.”

Guerrero needs to keep winning and eventually get another title shot at one of the 147lb champions. It might not be Garcia, but it’ll be someone. Guerrero’s manager Al Haymon just needs to make sure he matches Guerrero carefully to keep his boxing career running smoothly. Guerrero has limitations in his game that will result in him losing to the more talented fighters or the guys that can punch.

Peralta is supposed to be someone that Guerrero can beat. If Guerrero loses to Peralta, then he needs to sit down and seriously think about packing it in and retiring. Guerrero has got to be able to beat guys like Peralta, because this guy is light years away from being good enough to beat any of the top 15 contenders except fighters that don’t deserve to be ranked in the top 15.