Fighters competing on this Saturday’s Manny Pacquiao vs. Yordenis Ugas FOX Sports PBC Pay-Per-View undercard went face-to-face. They previewed their respective showdowns during a press conference Thursday before they square off in action beginning at 9 p.m. ET/6 p.m. PT at T-Mobile Arena in Las Vegas.

The press conference featured former world champions and all-action welterweights Robert “The Ghost” Guerrero and “Vicious” Victor Ortiz, who meet in a 10-round attraction, unbeaten contender Mark Magsayo, and former world champion Julio Ceja, who duel in a WBC Featherweight Title Eliminator, plus undefeated Carlos Castro and former title challenger Óscar Escandón, who battle in a 10-round featherweight bout that kicks off the pay-per-view telecast.

Tickets for the live event, which TGB Promotions and MP Promotions promote, are on sale now and can be purchased through t-mobilearena.com and axs.com.

“I feel like I’m 30-years-old again. I feel great. The time off allowed me to rest.

I couldn’t be happier. Training camp went great. Through the whole pandemic the past year-and-a-half, I just stayed in shape. I have my own boxing gym at home, so it was nice to be able to stay in the gym. 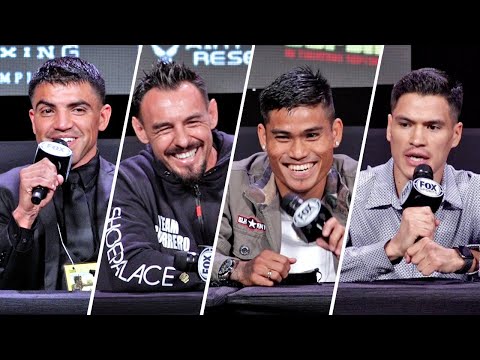 “I’ve been training out here in Las Vegas for a while now. It’s incredible to be on this card with Manny Pacquiao as it may be his last fight. I’m just excited about this opportunity, and I’m ready to go.

“When I got the call to fight Victor Ortiz, I said, ‘Let’s do it.’ I got a lot of respect for Victor. He always brings it, which means it’s going to be a great fight for the fans. I’ve put in the work I needed to put in.

“I’m expecting a good fight. I know Victor Ortiz is coming to fight. He’s always in great shape and brings it all the time. We had to prepare very well and not take it lightly. This is one of those fights that could catapult us into a world title bout. I know he’s coming, and I’m coming, so it’s going to be a great one.

“You’re going to see a great fight no matter what. Whether it’s on the outside or inside. Myself and Victor come to fight every time, so this fight might steal the show.”

“I really don’t have much to say. I’m just very grateful for this opportunity. I couldn’t have done it without my team. Coach Freddie Roach, Coach Marvin, Coach Pepe, and Marie, of course. I feel the same; it’s like I never left.

“What gave the biggest motivation of my lifetime are my two boys, Royal and Casino. I’m here to make a statement, and I’m not leaving without the victory.

“I’ve had big fights all around; I’ve been boxing as a pro since I was 17. Experience is the difference. I am an experienced veteran now.

“It’s a great pleasure to share the ring with another legend. That’s what boxing is all about. I’m only focused on what coach Freddie has me focused on and myself. At this point in time, we’re ready to go. We put in the work, and we did the homework.

“I would never in a million years expect for Robert The Ghost” Guerrero to not prepare correctly. I expect the best of him. I looked up to him, a southpaw like me. I have great respect for him and his entire team.

“I am with the elite. Guerrero comes to fight. He comes with pressure and boxing, but it doesn’t matter. At the end of the day, I know what I’ve done in training camp, and I’ve obeyed my camp 100%. I was in bed at the correct times, and I was dieting correctly and running when I was supposed to. I am ready.

“I made a promise to my babies: I’m going to reign for a decade. I’m back.”

“I want to thank God for putting me here and for the opportunity. I want to thank my promoters. I was dreaming and praying that I would be on the undercard of a Manny Pacquiao fight. Now my dream has come true. So, I’ve put my all into winning this fight, and I will be victorious.

“I am thankful for Freddie Roach for this camp. I’m so thankful that I have a legendary coach. He teaches me so many things about boxing and points out my mistake. All of my punches now are accurate. I’m a better fighter now.

“This is a great opportunity. I’m really motivated to become a world champion. I’m ready to win this Saturday and a world title. Don’t miss this fight because we’re here to win. When it’s Mexico vs. the Philippines, you know it’s going to be spectacular.

“The way I see this fight is that I’ve been in the ring with better opponents. I will be stronger and more physical than Magsayo. We are going to win by knockout.”

“It’s a dream come true to be on the stage with these great fighters. I’ve been training hard for something like this, and I don’t plan to let it go.

“As the opening fight, I think we should bring a great show and show the people what we’re made of. I’m not taking Óscar Escandón lightly. He’s a former world title challenger and has been on the same stage. It’s just great to be in this arena on a card with legends like Manny Pacquiao.

“Escandón is a great fighter, a strong fighter. He’s proven it in the ring. He said he had a great camp, and I had a tremendous camp with my sparring partners and my trainer Manny Robles. It’s going to be a great fight. I hope you guys don’t miss it because we’re going to put on a show, and I’m going to show everyone what I’m made of.”

“We were training for August 28th, but this is a bigger fight, and I’m ready for this card to start. I’m excited, I’m just ready for the first bell to ring, and I’m here for the ‘W.’ Thanks everybody for the opportunity to be in this great event.

“The fight with Jhack Tepora was an opportunity from God. It was an easy fight. I didn’t know I was going to beat him that quickly—same thing with Castro. I’m prepared, here to beat him and give everyone a surprise.

Tyson Fury announces he’s back in training for Deontay Wilder »