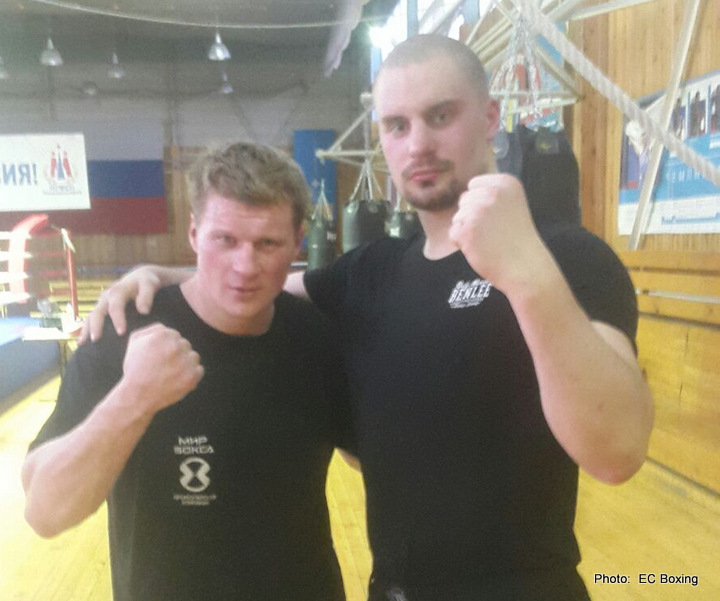 By Scott Gilfoid: Adrian Granat is one of those new generation heavyweights with amazing size at 6’7 ½” and incredible punching power in his right hand. The 25-year-old Granat (13-0, 12 KOs) has targeted several of the UK heavyweights that he wants to bag to add to his collection of names on his growing resume of knockout victims.

The following three British heavyweights are on Granat’s target list: Hughie Fury, David Price and Dillian Whyte. Grant, who comes from Sweden, has already knocked out British heavyweights Michael Sprott and Danny Williams in lightning fashion recently and now he wants to go after the younger heavyweights in Whyte, Hughie and Price. I’m not sure if you can really call the 33-year-old Price as young at this point, but he’s certainly young compared to Danny Williams and Sprott.

I think Granat can pretty much forget about getting Hughie or Whyte into the ring, because I can’t see either of those guys ever willingly agree to fight a monstrous puncher like Granat. No way. I think Whyte would have accepted a fight against Granat before he injured his left shoulder last year, but definitely not now. Ever since Whyte’s shoulder surgery to repair his left shoulder, he’s been essentially a one-armed fighter with his right arm being used in his fights for throwing power punches. The fact of the matter is, Whyte’s right hand isn’t powerful enough for him to beat a talent like Granat in my opinion. I think it would be a really bad idea for Whyte to get inside the ring with Granat because he would be getting hit with right salvos from the Swedish heavyweight from the opening seconds of the 1st round and I just cannot see Whyte taking those right hand missiles for long. There’s only so many hard shots you can take from a guy with the kind of size, power and talent that Granat possesses.

Hughie’s management might not be eager to throw him into the ring with a beast of a puncher like Granat, because he doesn’t have the kind of power to hold this guy off. The 6’6” Hughie is accustomed to being the bigger guy in his fights which allows him to keep the action on the outside to save him from getting shots blasted off of his chin. But with the size of the 6’7 ½” Granat, Hughie would have no easy of staying out of range of the Swedish talent’s huge right hand. I think the fight would end suddenly with Granat landing one of his howitzer right hands and Hughie dropping to the canvas like a sack of potatoes. That in turn would setup a revenge situation where Tyson Fury would potentially come and try and avenge the loss by taking on Granat himself. I think that would be a bad career move for Tyson, because he doesn’t have the punching power to mix it up with a guy like Granat. Unlike like Wladimir Klitschko, Granat isn’t hesitant about throwing right hands. He’ll throw them over and over again all night long without qualms.

“I haven’t studied Price that much but I’ve seen enough weaknesses in him that I could exploit,” said Granat. “He looks pretty weak and limited sometimes in the way he fights. I think Hughie moves better than Price and is a little bit faster. I think he’s too weak to hang with the big boys, though.”

You’ve got to like Granat’s honesty. He tells it like it is without sugar-coating it. The guy sees weakness in Price and Hughie and he wants to pick them off. Whyte has got weaknesses too in his game now that he’s totally reliant on his right hand in his fights. Whyte’s right hand is nothing like the right hand from Granat. I think it would be a long night for Whyte if he accepts the challenge from this Swedish giant because I can’t see him being able to take those right hands for long. Granat hits too hard, he’s too big, and he’s too willing to use his right hand repeatedly. Granat’s left hand isn’t that bad. He’s got decent power in that arm when he sits down on his punches.

David Price is still trying to come back from his knockout loss to the big punching Erkan Teper. It’s unlikely that he would accept a fight against a guy with the kind of size, power and youth that Granat has. It would be a risky fight for Price to take, and he’s probably not going to take that risk. It would be up to Price’s management at Sauerland Events whether they would want to put him in there with Granat.

Brook: I’ll do what I want against Golovkin »