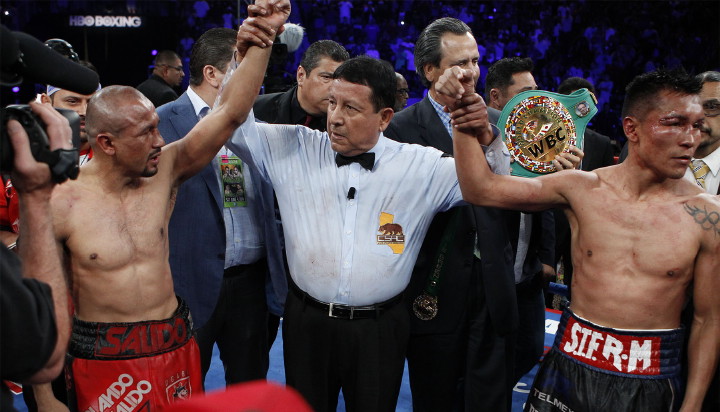 (Photo Credit: Tom Hogan/Golden Boy Promotions) By Jim Dower: WBC super featherweight champion Francisco Vargas (23-0-2, 17 KOs) wilted down the stretch but was still able to scrape out a 12 round draw tonight against #3 WBC Orlando Salido (43-13-4, 30 KOs) in a fight televised by HBO Championship Boxing from the StubHub Center in Carson, California. The judges saw the fight 114-114, 114-114 and 115-113 for Vargas.

You can argue that Salido should have edged the fight, but he was facing a champion. To beat a champion, you need to do more than judge defeat them by two to four rounds. You need to put them on the canvas and give them a good shellacking. Salido didn’t do that tonight. He just showed that he was better than Vargas and that he was the slightly better fighter tonight. That wasn’t going to be enough for him to get the win.

“It was a complicated fight like I expected, a very difficult fight from beginning to end with a lot of action,” said Salido. “It was a great spectacle for all the fans. They got what they wanted; they wanted to see blood and they saw blood. I would welcome another fight with him. I believe that I won by a slight margin, but I would welcome a rematch. I would also accept the fight from Takashi Miura or from Lomamcheko. I’ll fight anyone.”

“I used powerful jabs and countered with ruthlessness. Takashi Miura was a much more powerful puncher, but my respects to Salido. He is a very tough fighter and has a very strong chin.”

“It was a close fight, my respects for Julian he definitely is a hard puncher,” said Abraham “Chamaco” Lopez. “But I’m not hurt, I was able to counter the punches he came at me with. This victory opens doors for me, it moves me up to the next level in my career and gives me the opportunities to fight for a world title. I’m glad I listen to my corner, that’s what ultimately helped get the victory tonight.”

“This was a really tough fight,” said Julian “El Camaron” Ramirez. “I knew he would be a tough opponent, and that’s what I trained hard for. I know that he won some rounds, but I thought that I did very well out there. And I thought that I had a very good shot at winning this. I feel that the decision should have been much closer. But it is what it is, and that’s boxing.”

“I come out to win and I was expecting to knock my opponent out, but he was giving me a ton of trouble in the ring,” said Alexis Rocha. “If I ever lose a fight, my opponent is going to have to knock me out to take me down. Every fight for me is a learning experience, and I know now what I’m going to have to do to improve – including working on my combinations and staying collected during the fight.”

“I could tell in the first round that his body was open,” said Jonathan “Thunder” Navarro. “When I got him down in the first, I knew then, for me, that this fight was all about body shots. I could see he was wobbling in the second round. And that’s when I was able to take him down with a body shot. Like I said at the weigh-in, anybody can talk — but we will see if they can back it up. I was able to back it up.”

“I’m very happy I got the victory,” said Nick “La Calavera” Arce. “I trained for everything to go as planned, as it did. My opponent is a tough guy who can take lots of punches and I feel good about this fight. This is what I came out here to do.”

“My opponent was really tough and was able to take lots of punches which was challenging,” said Christian “Chimpa” Gonzalez. “Every fight is a learning experience for me, and I am extremely happy I was able to get tonight’s victory against this tough guy because this is what I came to accomplish.”

Former world title challenger Gabriel Rosado (23-9, 13 KOs) had to battle hard to defeat Antonio Gutierrez (21-2-1, 9 KOs) by a 10 round unanimous decision in a harder than expected fight. The final judges’ scores were 95-94, 96-93 and 95-94. Gutierrez put Rosado down on the canvas in the 4th with a combination to the head. The fight was competitive with a lot of two-way action. Rosado was able to come on late to get the win.

“I was hoping this fight would go a little differently,” said “King” Gabriel Rosado. “I wasn’t expecting to get knocked down. I know that I was making some mistakes in my rounds, and he was coming at me really hard. I know that I have a lot of support out here. This was a learning experience for me — despite my flaws, I was able to get back up and take this victory.”

“I had studied Rosado before this fight, and knew he was a fighter with great ability and punching power,” said Antonio “Tony” Gutierrez. “This has been the most difficult fight of my career thus far, but I feel that I was very impressive and dominated many of the rounds tonight. When I dropped him in the fourth round, I was surprised because I was just doing what my corner advised. And it worked. I don’t agree with the decision. I feel I gave the better fight tonight, and the crowd agrees with me.”