Orlando Salido not retiring after all 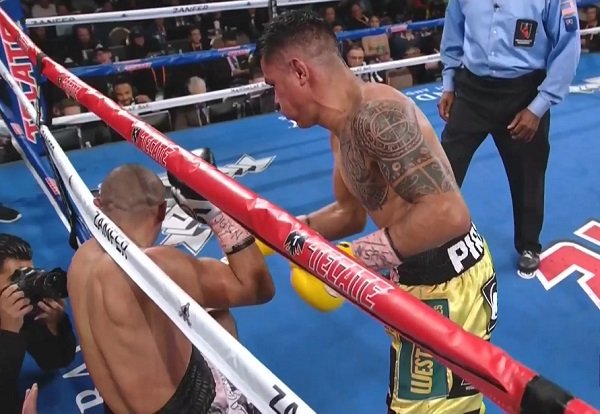 By Dan Ambrose: Orlando Salido has had time to think it over, and he’s decided not to retire after all following his 9th round knockout loss to super featherweight contender Miguel ‘Mickey’ Roman (58-12, 45 KOs) last Saturday night at the Mandalay Bay Resort & Casino Event Center in Las Vegas, Nevada.

You can bet that Top Rank will greet this news with joy, as they’ll likely look to setup a fight between their fighter WBO super featherweight champion Vasyl Lomachenko and Salido now. They wanted to make that fight before Salido agreed to fight Roman. Salido beat Lomachenko 3 years ago in 2014. That’s the only loss on the 2-time Olympic gold medalist Lomachenko’s record as pro.

It would look bad if Lomachenko were to decide to fight Salido now with him coming off a knockout loss, but I think Top Rank would still go for the idea of matching them. They would be counting on the casual boxing fans not knowing about Salido’s knockout loss to Roman. It wouldn’t show much daring and imitative for Lomachenko to fight Salido now, as he’s been talking about wanting to move up to the lightweight division for over a year now. If Lomachenko stays at super featherweight to face a guy that was knocked out in his last fight, then what does that tell you about him?

The 37-year-old Salido (44-14-4, 31 KOs) was knocked down 3 times in the fight in getting dropped in the 4th, 8th and 9th round. The fight was stopped after Salido was deposited onto the canvas in round 9. Salido looked tired more than hurt.

Salido retired after the fight with Roman was over. However, after less than 1 week, Salido has decided not to retire after all. He blames his defeat on him coming into training camp for the Roman fight too heavy, which forced it to be a fat farm instead of a regular training camp.

“I could not do the things that I needed to do in the ring, which I attributed to my age and the many wars I’ve had in my career,” said Salido to RingTV.com about his loss to Roman. “But when I returned home and after fully examining my preparation and the fight, I realized that the weight was also part of the problem last Saturday. I arrived at the camp weighing a lot, the highest of my career and losing weight became the focus of training and preparing me for the fight was secondary. I feel like I left the fight on the scale,” Salido remarked.

Salido is probably right. He did look very drained at the weigh-in for the fight. In the kick off press conference for the Miguel Roman fight, Salido looked very heavy. He had too much weight that he had to lose in training camp for him to have a good shot at beating Roman. However, this isn’t the first time Salido has done this. He did the same thing in his previous fight against 36-year-old journeyman Aristides Perez (31-10-2, 17 KOs) last May, and he was badly hurt by him in round 4 when he was nailed by a big uppercut.

Salido still ended up winning the fight by a 7th round stoppage, but he sluggish and heavy around the middle in the fight. You could tell that Salido was nowhere near the same condition he’d been in for his fight last year in June of 2016 against Francisco Vargas or his fight before that against Roman Martinez in September of 2015. Salido was in excellent shape for both of those fights. Had Salido been in comparable condition for his fight with Mickey Roman last Saturday, he likely would have battered him and stopped him. Roman was not impressive at all. It was just case of him using his youth and superior conditioning to bull Salido to the ropes, where he got the better of him each time. When the two fighters were in the center of the ring, Salido got the better of him each time.

“If something good comes out at 130 or 135 pounds I would seriously think about going back to fight,” Salido said. “Sometimes at the end of a fight and in the heat of the moment things are said, but when you take the time to reflect you realize that you should not have said them. I want to return to the ring and give my fans more shows and I think I still have something good to offer boxing.”

If Salido is going to fight again, he might be better off moving up to the 135-pound division where he won’t need to fight the weight as much as he will if he stays at super featherweight. Salido has obviously gotten too heavy since his fight with Vargas last year, and I don’t think he can get back to super featherweight any longer without draining himself each time. Salido would probably be better fighting in the lightweight division. There are a lot of guys like Jorge Linares for Salido to fight.