Lomachenko vs. Salido 2: Don’t be surprised if this fight happens 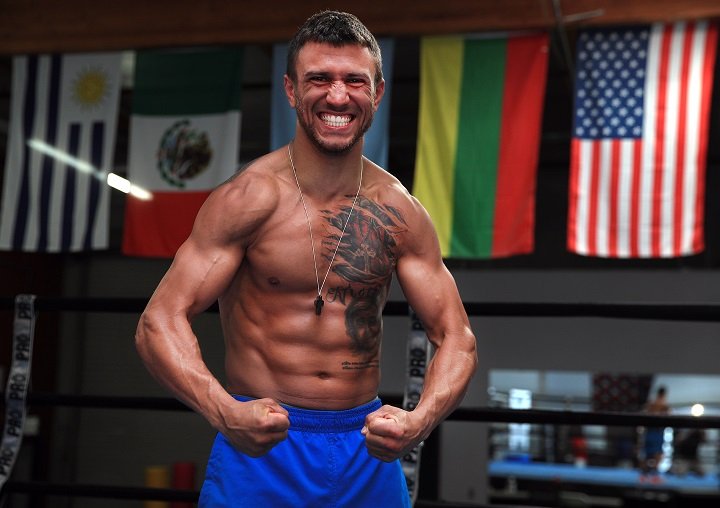 By Chris Williams: Vaslyl Lomachenko needs an opponent for his next fight, and it’s clear that he’s not ready to move up to the lightweight division to take on the lion’s in that division like Mikey Garcia. Lomachenko (10-1, 8 KOs) still has unfinished business with Orlando Salido (44-14-4, 31 KOs) from his 12 round split decision loss to him from March 2014.

Before Lomachenko’s fight with Guillermo Rigondeaux earlier this month on December 9, Top Rank had been trying to arrange a rematch against Salido. The fight didn’t get done unfortunately, and Salido ended up losing to Miguel ‘Roman’ Roman by a 9th round knockout on December 9 in Las Vegas, Nevada. Salido momentarily announced his retirement after the fight. Days later, the 37-year-old Salido changed his mind, saying that he’ll continue his career.

Salido said he came into training camp for the Roman fight too heavy, and he was drained himself taking the weight off. Top Rank might still be interested in putting together the Lomachenko vs. Salido rematch. The fight will be a lot easier to make now that Salido is coming off of a loss to Roman.

Salido might not ask for as much money to fight Lomachenko now. Salido obviously isn’t in the best position in terms of his career right now. The interest from the hardcore boxing fans in a Lomachenko vs. Salido 2 fight probably won’t be high, given his recent loss to Roman. The casual boxing fans will be interested in seeing Lomachenko fight Salido. They probably won’t know anything about Salido’s loss to Miguel Roman. That’s the beauty about casual fans. As long as they’ve heard of one or both fighters, they won’t be bothered too much about the recent setback by Salido against Roman.

Lomachenko’s promoter Bob Arum says he wants to match him against WBC lightweight champion Mikey Garcia, who he thinks will quit like several of Lomachenko’s recent opponents have done against him. However, Lomachenko’s comments recently about wanting to fight super featherweights like Gervonta Davis suggests that he’s more interested in remaining in the 130 lb. weight division than he is in moving up in weight.

“Mikey Garcia’s an excellent fighter. He’ll hang with him until he’s ready to get knocked out and then he’ll probably quit,” said Arum to Fighthub.

The Lomachenko-Garcia fight isn’t going to happen. Garcia will be challenging for the IBF 140 lb. title in February. After that, Garcia says he wants to move back down to lightweight and fight Lomachenko or WBA champion Jorge Linares. Lomachenko plays it too safe though when it comes to moving up in weight. Lomachenko will likely take it easy when he moves up in weight by facing someone non-threatening to him.

Victor Ortiz vs. Devon Alexander in the works for February »