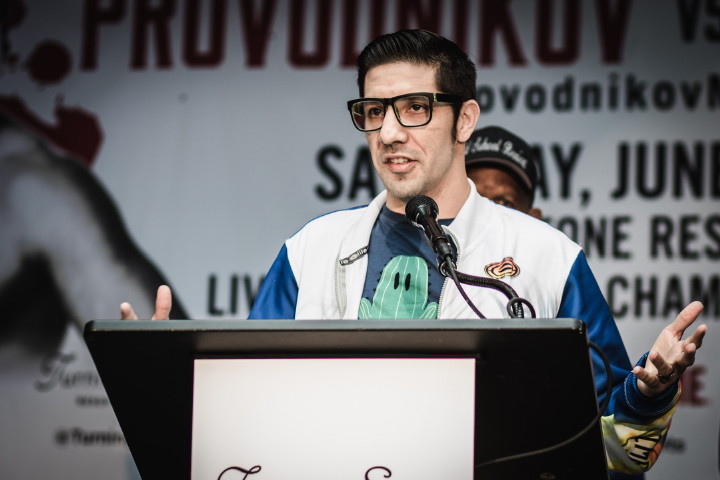 (Photo credit: Amanda Westcott/SHOWTIME) By Dan Ambrose: John Molina Jr. (28-6, 23 KOs) really has his work cut out for him tonight in his fight against the hard punching slugger Ruslan Provodnikov (25-4, 18 KOs) in their contest on Showtime Boxing at the Turning Stone Resort and Casino in New York. Molina still wants to win a world title.

It doesn’t look like it’s going to happen with him. He’ll very likely be knocked out by Provodnikov tonight, and the loss could knock Molina out of the top 15. He’s been losing so frequently as of late that you have to wonder why the World Boxing Organization still has him ranked in their top 15.

Molina, 33, is a clear underdog going into tonight’s fight, and it’s understandable why. Molina has been losing like it’s going out of style lately in losing three out of his last four fights. You can argue that the only reason Molina was selected for tonight’s fight against Provodnikov was because of the fighter he was in the past rather than the fighter he is today.

Molina seems to have lost something from his game since the beat down he suffered against Lucas Matthysse two years ago in April 2014. Molina lost that fight by an 11th round stoppage and he took a lot of punishment. Molina is clearly the B-side opponent for Provodnikov. He’s the token lamb that Provodnikov is supposed to slaughter.

Provodnikov recently signed a contract with Showtime, and they went with Molina as his opponent rather than insisting on him fighting someone with at least a winning record in his last four fights like Eduard Troyanovsky, Antonio Orozco, Chris Algieri, Lamont Peterson, Frankie Gomez, Humberto Soto, Jason Pagara, Mauricio Herrera, or Thomas Dulorme, I think some if not all of those fighters would beat Provodnikov if given the chance. I’m not saying they would be as exciting as Provodnikov but I think most of them would likely beat him. Herrera and Algieri already did beat Provodnikov, which is probably why they’re fighting him now. It might look bad if Showtime signs Provodnikov to a contract only to see him lose in his first fight with them.

“I definitely want the fans to know when I fight they’re going to get a fight, but I’m not in this business just to fight,” said Molina to the latimes.com. “I want some accolades, some hardware on the world level. I’m a competitor. I have a goal in mind and that goal is in my heart and it’s burning, I welcome big fights. I welcome Ruslan Provodnikov, Matthysse, Broner. This is what brings out the best in me.”

I think if you saw the effort Molina put in for his losses to Humberto Soto and Adrien Broner, you might disagree with Molina about him bringing out the best for those fights. Molina looked like he gave up in both of those fights early on once he was met with some resistance and defensive skills by Broner and Soto.

Molina looked like he didn’t to be there. That’s why it is hard to understand why Molina was picked out for the Provodnikov fight because he didn’t exactly earn that fight unless losing is a way of earning. If Provodnikov had selected Molina as an opponent back in 2014, then it would have made a lot of sense. But with Molina coming into tonight’s fight with a 1-3 record in his last fight, you can only assume that he was selected for the fighter he was in the past rather than the one he is today. 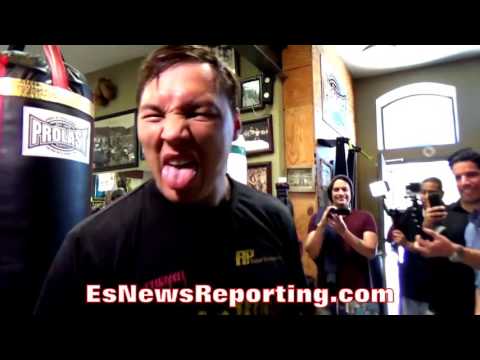 I think Molina was selected because he’s got a name that is well known to the hardcore boxing fans and to a certain extent with some casual fans. He’s likely been selected because of his name and because he’s not a real threat to beating Provodnikov. That’s bad for the fans that are hoping that tonight’s fight will be a 50-50 affair, because they might not be too pleased once Provodnikov starts bullying Molina round the ring tonight and not getting a lot of resistance.

“I have unfinished business and before this is all said and done, I will bring home that world title,” Molina said. “Knock-down, drag-out, I will get mine. I’ve made it here by my will and consistency. I’m going to get what I want.”

I think it’s safe to say that Molina won’t be winning a world title anytime soon. I do not see it ending well for him if/when he gets inside the ring with the winner of the Viktor Postol vs. Terence Crawford fight. Even if Molina looks for an arguably lesser world champion like WBA belt holder Ricky Burns or IBF champion Eduard Troyanovsky, I do not see Molina beating either of those guys. I think he loses to them and possibly by a knockout.

Burns is seen my many boxing fans as the weak link among the current group of 140lb champions. If Molina could get a shot against Burns, he might be able to pull off an upset and take his WBA title. Unfortunately, if Molina losses tonight against Provodnikov like many fans think he will, then I don’t see him staying in the top 15.