Mike Alvarado vs. Josh Torres this Saturday on 6/25 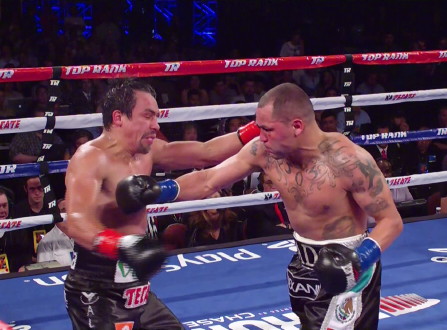 By Patrick McHugh: Former WBO light welterweight champion Mike Alvarado (35-4, 24 KOs) will be fighting this Saturday night on June 25 against Josh Torres (15-4-2, 7 KOs0 at the Bomb Factory in Dallas, Texas. This will be the second fight for the 35-year-old Alvarado for what some boxing fans see as a comeback from three consecutive losses he suffered 2013 to 2015.

Alvarado was out of the ring for over a year after his 3rd round knockout to Brandon Rios in January 2015 to March 2016, when he came back to defeat journeyman Saul Corral by a third round knockout.

Alvarado is said to have his head on straight now and is in great condition to get his career back on track to where it was four years ago before things soured for him. Torres, 26, doesn’t have the kind of talent to give Alvarado any problems in this fight.

Torres is more of a body for Alvarado to get in some rounds, and to try and sharpen enough to get ready to begin fighting world class opposition once again. Torres was beaten last year by Cameron Kreal by a 10 round majority decision. Torres’ other losses have come against Dusty Hermandez-Harrison, Raul Carillo and Rufino Flores. He also has a couple of draws against Joel Vargas and Jose Marrufo.

If Alvarado can get back to where he was in 2012 and before that, he can be a very good fighter. However, he’s fighting at welterweight now rather than 140, and that could potentially make it tougher on him to find success.

At 140lbs, Alvarado was able to use his size to beat lighter guys than him. In the welterweight division, Alvarado will need to be able to try different things if he wants to be able to win like he ws in the past. He’s probably not going to be able to out-slug fighters like Kell Brook, Danny Garcia, Shawn Porter, Errol Spence Jr. or Keith “One Time” Thurman. Those are all guys that are younger than him, and who are natural welterweights that have excellent punching power.

Super middleweight Matt Korobov (25-1, 13 KOs) is on the undercard in the co-feature bout against journeyman Bryan Vera (23-10, 14 KOs). This should be a winnable fight for Korobov, because Vera’s career has suddenly gone downhill in the last three years with defeats against Julio Cesar Chavez Jr., Willie Monroe Jr. and Rocky Fielding. Vera, 34, hasn’t fought in a year since his 2nd round knockout loss to Fielding on June 25, 2015.

It’ll have been exactly one year since Vera fought when he steps foot inside the ring this Saturday night. It looks like Vera won’t be able to get back to the level he was fighting at three to four years ago when he beat the likes of Sergio Mora and Sergey Dzinziruk. Vera was still very good back then. In Vera’s first fight against Chavez Jr. in 2013, he was arguably robbed of a victory after out-punching an out of shape Chavez Jr. for 10 rounds. In the rematch in 2014, Chavez Jr. won decisively in beating Vera by a 12 round decision.

Korobov was stopped in the 6th round by Andy Lee in December 2014. Since that loss, Korobov has fought once, beating journeyman Josue Ovando by an eight round decision last January.