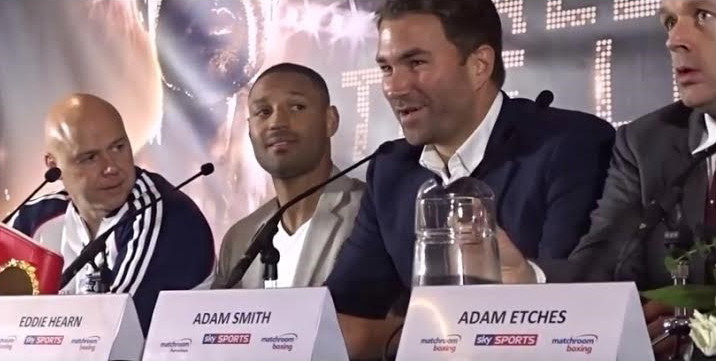 By Scott Gilfoid: IBF welterweight champion Kell Brook (36-0, 25 KOs) has very little time left at 147 to make things happen for him. Brook, 30, says he wants to unify all the titles at welterweight, but his unification attempts in that direction will likely begin and stop after his next fight against WBO 147lb champion Jessie Vargas in August or September.

Brook isn’t going to stick around long enough to try and unify all the belts. His promoter Eddie Hearn says Brook will definitely be moving up to junior middleweight to campaign as the 154lb fighter in 2017. Just why Brook will move up in weight in 2017 is the big question. I mean, if Brook is so worked up about unifying all the straps at 147, then why set a timeline on that goal of just one year and then move on when/if that goal isn’t accomplished?

Some boxing fans might think that that Brook’s decision to move up in weight to 154 in 2017 is so that he can avoid fighting unbeaten 2012 U.S Olympian Errol Spence Jr. (20-0, 17 KOs), who many feel is the next Floyd Mayweather Jr. It would be a real pity if Brook moves up to 154 just to avoid taking the fight with Spence.

Unfortunately, that’s what some fans believe Brook has in mind in moving up in weight right at the same time he’ll be expected to defend his IBF title against his first talented contender. It’s one thing for Brook to be getting softballs lobbed to him with him facing Frankie Gavin, Jo Jo Dan, Kevin Bizier and Jessie Vargas, but it’s quite another thing where he would be defending his title against an arguably real talent like Spence. I’m just saying.

I would not want to be Brook if I had to fight Spence. So it’s for the best that Brook moves up to junior middleweight rather than facing Spence and potentially getting knocked into oblivion by the talent. I do know think Brook would be the underdog in a fight against Spence, and that would be the first time Brook was in that position since he won his IBF belt two years ago.

“Kell will move to light middleweight in 2017,” says Hearn to IFL TV.

There really isn’t anyone in the 154lb division for Brook to fight right now other than Liam Smith, the Charlo brothers, Erislandy Lara, Miguel Cotto and Saul “Canelo” Alvarez. Unless Hearn can work his magic to setup a fight between Brook and Canelo or Cotto, I see the junior middleweight division being a dead end for Brook. He said he would be willing to fight middleweight champion Gennady “GGG” Golovkin, but do you honestly see Brook taking a fight against GGG? I do not see Brook ever fighting Golovkin. That would be such a dramatic departure for Brook from the guys he’s been facing thus far that it wouldn’t even be funny.

With Brook, we’re talking about a fighter that has been matched against guys like Jo Joe Dan, Matthew Hatton, Kevin Bizier, Alvaro Robles, Vyacheslav Senchenko and Carson Jones.
As for the Brook vs. Liam Smith fight, it doesn’t look like Hearn is even remotely interested in making that fight until Brook moves up to 154 permanently, and even that, it will depend on whether Smith is still there as the WBO champion.

“If he’s still around, we’ll definitely look at that fight,” said Hearn about Smith after Brook moves up to junior middleweight. “I don’t see Smith as a big fight in terms of what I’m talking about, which is Cotto and Canelo. I had a long chat with Kell last night. We really want to have the big fights at welterweight, and try to unify before moving up. The offer made to Kell [from Liam Smith’s promoter] was not nearly enough. It’s less than what he’s been earning, and it’s a British world title fight for Kell to become a two belt world title champion. Frank said we can just freeze our belt and move up. No, we can’t. If we decide to fight for the WBO junior middleweight title, then we lose our IBF world title. There’s no question about it. That’s a big move for us. With the [Jessie] Vargas fight in the wings, the unification fight, really, it’s not something we’re looking to do yet. People in boxing think Brook-Liam is a big fight, but I’m not sure that it is. People like Liam and Terry [Flanagan] are suffering terribly with their profile. I heard there was 1000 to 1,500 people last Saturday night at the Echo Arena. This was a homecoming of a Liverpool world champion. I don’t feel that fight [Brook vs. Smith] is that big outside boxing, and I feel the same way about Flanagan-Crolla as well. Liam is very, very good.”

Well, it sure doesn’t look like Hearn is interested in matching Brook against Liam Smith, does it? We’ll likely see Hearn whistling a different tune after Brook moves up to 154 and finds himself with a lot of difficult choices for opponents. Many of the contenders at junior middleweight have little if any following in the sport. The ones that are well known, the Charlo brothers, Austin Trout, Erislandy Lara, Miguel Cotto and Canelo Alvarez, would likely be a step too far for Brook. I don’t think Brook could get fights against Cotto or Canelo.

I’m sure Brook and Hearn would jump at the chance to make those fights if they were offered to him. I just don’t think they will be. But that in order for Kell to stay unbeaten to potentially get the fights against Canelo and Cotto, I think it’s even more important that Kell not stick around at 147 much longer because he’ll soon be forced into fighting Spence. I don’t think Brook can win that fight, even if he decides to hold all night long to try and prevent Spence from throwing punches.

“We’re looking at August 27 or September 3, but we don’t expect many problems with the deal,” said Hearn about the Brook vs. Vargas fight negotiations. “We think Vargas has come out and said he’s signed his deal, but what that means is he’s agreed with Top Rank what he’s getting for the fight. We’re not having problems with that fight. It’ll most likely get announced this week or next week. I think September 3rd is a better time to do an event than the end of August.