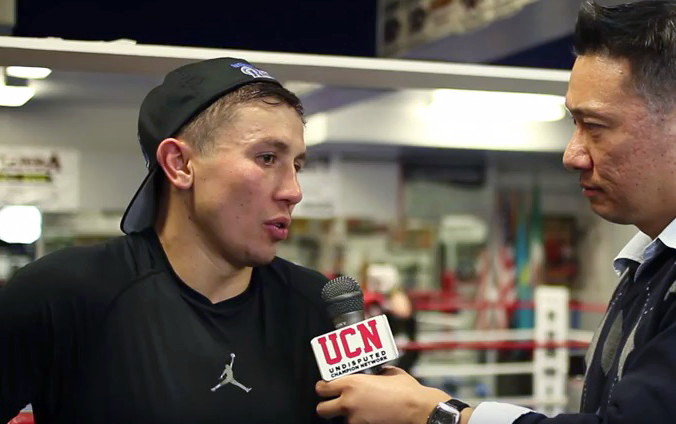 By Dan Ambrose: IBF/IBO/WBA middleweight champion Gennady “GGG” Golovkin (34-0, 31 KOs) is the birthday boy today in turning 34-years-old. Golovkin is in his 10th year as a pro, and he now more than ever needs to start getting the bigger names to fight him if he doesn’t want to wind up as another avoided fighter like Guillermo Rigondeaux.

2016 is going to be a very important year for GGG because he’ll find out this year if he’ll be getting a fight against WBC middleweight champion Saul “Canelo” Alvarez or not. If Golovkin can’t get that fight, then he needs to move on and just be happy with winning the WBC title after it’s stripped from the 25-year-old Canelo for failing to accept the challenge from Golovkin.

Golovkin has a fight in two weeks from now against Dominic Wade (18-0, 12 KOs) on 4/23 on HBO Championship Boxing. This is a typical opponent for Golovkin, who has had to spend much of the last six years fighting obscure fighters due to his inability to get the big names to fight him.

If Canelo chooses to avoid the fight with Golovkin, it would mean that the Kazahkstan fighter would need to be satisfied with fighting guys like Billy Joe Saunders. Canelo is saying he’s a 155lb fighter, so he’s escaping a lot of the negative feedback that a fighter would normally receive for failing to fight the best guy in their division.

Canelo has kind of created his own weight class at 155, and that’s unfortunate because it means we could be seeing more fights between him and welterweights in the future. Canelo is currently scheduled to fight welterweight Amir Khan on May 7 next month in Las Vegas, Nevada.

Golovkin’s advancing age means that there’s going to need to be more pressure put on his promoter Tom Loeffler of K2 Promotions to find big fights for him. If Loeffler can’t get guys like Canelo, Daniel Jacobs, Miguel Cotto and Floyd Mayweather Jr. to take a fight against Golovkin, then he needs to look to the other weight classes to get fighters to face him.

Loeffler should try to get junior middleweights Jermall and Jermell Charlo, Erislandy Lara, Austin Trout, Dementrius Andrade, Vanes Martirosyan, Liam Smith, and Joshua Clottey. Loeffler could even take a page from the Canelo playbook in start looking to drag some welterweights up in weight to fight them at middleweight like Kell Brook, Danny Garcia, Amir Khan, Tim Bradley, Shawn Porter, Keith Thurman and Errol Spence.

It’s likely that none of those fighters will ever accept a challenge to move up to middleweight to fight Golovkin at a catch-weight of 155, but it couldn’t hurt to try getting one of them.

Happy Birthday to a Great Champion in and out of the ring, the best is yet to come! @GGGBoxing #GGG pic.twitter.com/vCCwOvxQDA

Ultimately, Golovkin will probably need to move up to super middleweight in the near future if he wants to get bigger names to fight him because it doesn’t look like he’s ever going to be able to get an y of the talented fighter sin the 160lb division to fight him.

Yes, Golovkin can possibly get one or two junior middleweights and welterweights to fight him, but he’s not going to be able to get a Floyd Mayweather Jr. type of name to agree to fight him because there’s no one at that level in the sport now that Mayweather is gone.

If Golovkin is satisfied with being the uncrowned number one fighter in the middleweight division, then it doesn’t matter if he never gets the top fighters to face him. The problem with that is the big money will remain elusive for Golovkin. He can only make big money through the PPV fights on HBO, and there are only a small number of fighters that are popular enough to be worthy PPV opponents for Golovkin. Canelo is the number guy, but you can drag him kicking and screaming into the ring to force him to fight Golovkin because that’s not going to work. If Cnaselo doesn’t want to fight Golovkin, then he can continue to fight in his special weight class of 155lbs and there’s nothing anyone can do about it.

Bradley: Pacquiao’s fans will be disappointed on Saturday »