Abraham vs. Ramirez: Will Arthur need a KO to keep his WBO title? 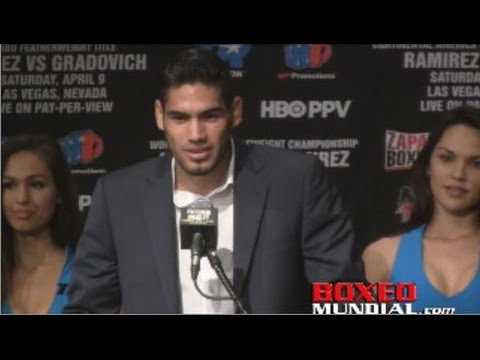 The 24-year-old Ramirez is attempting to become the first Mexican fighter to capture a super middleweight title, and Abraham wants to become the first German to win a fight in Las Vegas. Just which of these two boxers will come out ahead is the big question.

Abraham, 36, is the more powerful of the two with the vastly superior resume. Ramirez is well-connected with him being one of Top Rank’s fighters in Bob Arum’s stable of fighters. In looking at Ramirez’s past fights, he looks average at best, and not a truly high level fighter at this point in his career.

Arum obviously can’t wait forever to see if Ramirez will develop into a good fighter, so he’s getting a shot at a world title right now. With the 6’2” Ramirez there’s no telling whether he’ll ever improve enough to win a world title in the sport. You have to figure that if Ramirez can’t beat Abraham, then Arum might need to go in another direction in looking for someone else to win a world title for his Top Rank stable at 168. It wouldn’t seem to be #3 WBO Jesse Hart, because he’s struggling against journeyman at this point in his career despite his inflated ranking with the World Boxing Organization.

“This is my dream. I’m living my dream because when I started in my professional career, I dreamt all the time of this moment, a fight with the champion for the belt. This is the moment. It’s my chance and I want to take it,” said Ramirez via Fight News.

It’s going to be very hard for Ramirez to beat a solid fighter like Abraham because Ramirez hasn’t shown the kind of ability as of yet for him to beat someone at this level. It wasn’t a good sign seeing Ramirez rocked repeatedly by fringe level fighter Maxim Vlasov last year.

That was only instance in which Arum took the training wheels off the 24-year-old Ramirez to see how he’d do against a halfway decent fighter. Ramirez looked terrible in that fight. Arum then backed him off and put him back in with weak opposition in his last two fights. Ramirez looked good against the weak fighters as he’s done in the past, but we really didn’t learn anything from those fights to find out if Ramirez has improved since his fight against Vlasov.

“I’m very happy to be boxing in America. I want to be the first German boxer to win in Las Vegas. I’ve trained very hard and I’ve given a lot to make sure that I win Saturday,” said Abraham.

Many boxing fans believe that Abraham is going to need a knockout on Saturday to keep from getting robbed of a decision. Abraham is facing a Top Rank fighter in Ramirez on a Top Rank card, and he’s fighting in a foreign land. Former heavyweight world champion Mike Tyson has already given Abraham valuable advice in telling him that he needs to go out and knock Ramirez out. Arum is already talking about Ramirez’s first defense of his WBO title, as if a win over Abraham is a forgone conclusion. That’s not a good sign if you’re Abraham. You never like to see your opponent’s promoter already planning out title defenses for their fighter. Abraham might need to make sure there’s no chance of him losing his belt by going out and knocking Ramirez clean out on Saturday night.