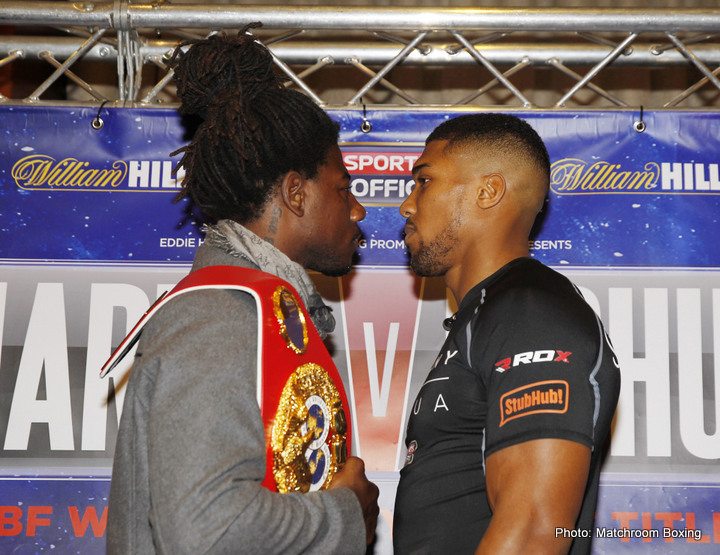 By Scott Gilfoid: Former heavyweight world champion Evander Holyfield decided to weigh-in with his thoughts on this Saturday’s fight between IBF heavyweight champion Charles Martin (23-0-1, 21 KOs) and home fighter Anthony Joshua (15-0, 15 KOs) in their fight at the O2 Arena in London, England.

Holyfield believes that this fight is an evenly matched fight between two big heavyweights. Holyfield likes Joshua’s hometown advantage, because he believes that could help him out. However, Holyfield sees Martin’s southpaw stance as a factor in this fight as well. Holyfield thinks the Martin-Joshua fight could be the best fight of the year.

“I think he is going to be a great fighter and this could be one of the fights of the year. These two are evenly matched. Joshua is fighting in England so you could have a really close fight,” said Holyfield via skysports.com.

By Holyfield pointing out that the fight could be close due to it taking place in England, it makes you wonder if we’re going to see some wacky scoring on Saturday. I sure hope not because that would be a real buzz-kill to have some oddball scoring take place like we recently saw in the Rocky Fielding vs. Christopher Rebrasse super middleweight fight last Saturday night at the Echo Arena in Liverpool, UK. Rebrasse pretty dominated the fight and even dropped Fielding in the 2nd round. I had Rebrasse winning the fight by an 8 rounds to 4 score, and there was no way on earth did I see Fielding winning the fight. However, the judges gave Fielding the victory by a 12 round split decision. This kind of tells you what Martin might be up against this Saturday night if he doesn’t take the judges out of the equation by knocking Joshua out.

We haven’t seen Joshua knocked out since his amateur days, so it could prove to be difficult for Martin unless he takes a page out of the playbook by Romanian southpaw Mihai Nistor in their fight in 2009. Nistor stopped Joshua in the 3rd round of that contest. If you look at what Nistor did to win the fight, it wasn’t rocket science. Nistor just made sure that he was the one coming forward all the time putting pressure on Joshua. Nistor kept nailing Joshua repeatedly with huge left hands to the head that he had no defense for. Nistor put everything he had in each shot, and he was able to turn Joshua into a timid fighter by the 3rd round.
“You’ve got more right-handers than left-handers and it is all about how people deal with left-handed people,” said Holyfield.

Martin is definitely going to have the advantage in this fight because of his southpaw stance. Joshua hasn’t fought too many southpaws thus far, and we saw what happened to him when he fought the southpaw Nistor in the amateur ranks. Joshua had no defense for the huge left hands that Nistor was nailing him with in that fight. Martin hits harder than Nistor, and he’s a lot bigger than him as well. If Martin can apply the same kind of pressure on Joshua that Nistor did, then this could be a really easy fight for Martin on Saturday night.
Joshua has packed on 30 pounds of muscle since his fight against Nistor, but he hasn’t packed that 30 pounds of muscle around his head. In other words, Joshua’s head is going to be just as vulnerable against Martin than it was in his fight against Nistor. 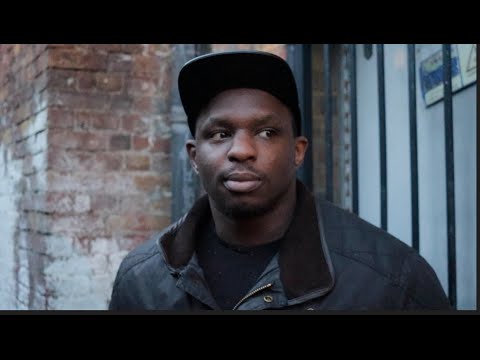 If anything, Joshua will be more vulnerable against Martin because he won’t be wearing headgear like he was against Nistor, and he’ll be fighting a much bigger fighter in 6’5” Martin. This could end up badly for Joshua if he doesn’t find some defense before he steps foot inside the ring with Martin. Joshua will need to abandon his old style of fighting in which he just charges forward, blindly throwing shots in every direction. To beat a skills counter puncher like Martin, Joshua is going to need to fight with some brains and discipline.

“This isn’t golf. It’s the fight game, the hurt business. You fight until you’re pulled off your opponent. That’s what I’d tell any fighter in my gym,” said Joshua to Behind the Ropes. “You don’t fight and listen for the bell. That’s why people get punched after the bell. As a fighter, let’s not forget what you’re in it for. You’re a gladiator, a warrior and you fight until you’re pulled apart. That’s where I’m coming from.”

Joshua got a little out of control in his last fight against Dillian Whyte last December. In that fight, Joshua nailed Whyte with a shot clearly after the hell hand rung at the end of the 1st round. The punch angered Whyte enough to where he went after Joshua to try and retaliate. However, Whyte was kept from nailing Joshua. The referee failed to take a point off from Joshua for his rough stuff in throwing a punch after the bell. Hopefully we don’t see that this Saturday night because it’s not needed. 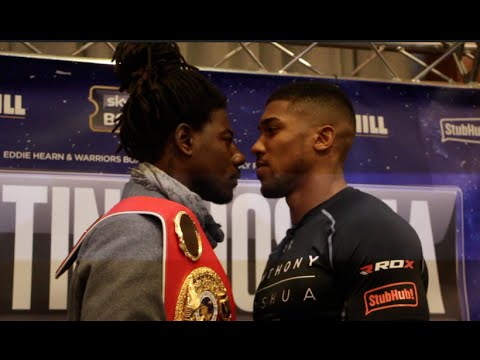 If Joshua can’t hear the bell sounding at the ends of rounds, then the referee will need to take points off from Joshua so that his hearing can become a little sharper. When Joshua hears the 10 second bell, he should realize that that the bell for the round will soon be ringing. I mean, we don’t want to see Martin get brained after the bell when he’s got his hands down by his sides or if he’s walking back to his corner. That would look really bad, especially if Joshua isn’t penalized for his extracurricular activity like what was the case in his fight against Whyte.

“We keep rocking and rolling until we’re pulled apart and may the best man win. Someone has to go. I enjoy it. I wouldn’t do it if I didn’t. Boxing to me is fun and helps me to develop me as a man,” said Joshua.

It sounds like Joshua hasn’t learned his lesson from his knockout loss to Nistor. If Joshua wants to brawl 24/7 on Saturday night, then Martin should accommodate and see if he can’t follow the blueprint that Nistor created by nailing Joshua with left hands to the head repeatedly. Joshua is so wide open for left hands that it’s not even funny. If I were Joshua, the last thing I would want to be doing is slugging it out with a southpaw. That just sounds stupid if you ask me. I’d be playing it safe by staying on the outside and trying to use my jab all night long.

Dereck Chisora was bragging about Joshua’s jab this week. Well, this would be a good opportunity for Joshua to show the boxing world and Chisora whether his jab is as good as Chisora says it is. Frankly, I think Joshua’s jab is painfully slow and easily avoidable, but then again, I’ve seen tons of fighters before. I watch things like jabs, and I can tell when I see a good jab.

Joshua lacks the force and speed in his jabs to be able to use that as his primary weapon. It might be a decent backup weapon to use if he starts getting his bell rung by Martin repeatedly on Saturday night. But if Joshua starts using his jab to try and control the fight, I see Martin taking over the fight and blasting Joshua out with left hands like Nistor did. Joshua will need to actually throw some punches if he wants to win on Saturday night. I wouldn’t count on the judges giving him a decision win because Martin is going to be coming into the fight looking to take Joshua out so that there’s no chance that the judge can play a part in the final outcome in this contest.

Martin is coming off a beautiful 3rd round knockout win over Vyacheslav Glazkov in his last fight in January. Martin started off slowly in the first two rounds of that fight, but starting in the 3rd round, he began to nail Glazkov with huge left hands to the head. Glazkov then suffered a knee injury after getting nailed by one of Martin’s big left hand shots. It would have been interesting to see how the fight would have gone had Glazkov not suffered the knee injury, but unfortunately we can’t go back and redo the fight. All we know is Martin punched Glazkov hard and the next second we saw Glazkov on the canvas with a knee injury.
Joshua vs. Martin will be televised on Sky Box Office PPV and Showtime Championship Boxing this Saturday night on April 9.

« Abraham vs. Ramirez: Will Arthur need a KO to keep his WBO title?