Dirrell brothers in action on April 29 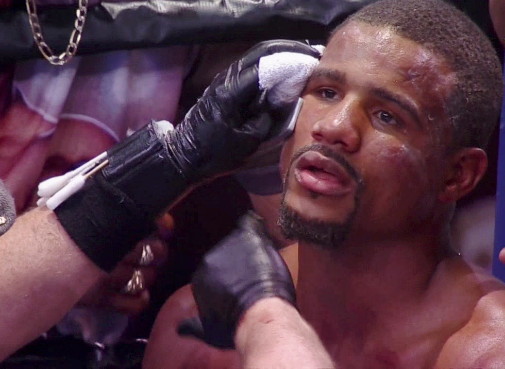 The 32-year-old Truax will be moving up from the 160lb division to take the fight against the 31-year-old Dirrell. It should be a good fight for as long as it lasts. Also on the card will be Anthony’s talented brother Andre Dirrell (24-2, 16 KOs) facing former light heavyweight title challenger Blake Caparrello (22-2-1, 6 KOs) in a scheduled 10 round fight in the co-feature bout.

It was a fight that was almost a draw. I mean, Dirrell would have won had he not been knocked down twice in the 2nd round. One of the knockdowns was little more than a push from DeGale. The referee royally blew it.

You can arguably say that Dirrell only has one defeat on his resume because his loss to Carl Froch in 2009 was a controversial loss. The fight took place in Froch’s home city of Nottingham, UK. He won the fight by a 12 round split decision, but Dirrell appeared to win the fight by at least five rounds.

When active, Andre can be the most talented fighter in the 168lb division. He’s an incredible talent. He just needs to be active and he can be the best fighter the division has ever seen before.

Andre Dirrell has stayed out of the ring for the past 10 months, which isn’t the wisest thing that he could have done in terms of his career. Dirrell already missed extended amounts of time from March 2010 to December 2011 after his disqualification win over Arthur Abraham. That was a year and a half Dirrell lost in his career.

Dirrell then lost another year of his career when he failed to fight at all during 2012. Dirrell then lost a year and a half of his career when he didn’t fight between February 2013 to August 2014. With as much time that Dirrell has missed in his career, it’s a real surprise that he was able to be so competitive against DeGale last year. I think Dirrell would have taken that fight with ease if he had been sharp, and in better shape.

#staytuned it's almost time for some news. pic.twitter.com/0geSoAOtzh

Dirrell didn’t look anything like the fighter that had fought Froch in 2009. Dirrell had lost a ton from his game from the inactivity in my view, and he appeared huge at the weight and not as toned as he’d been. It just makes me wonder how hard he tried for the DeGale fight, and whether he can comfortably make the 168lb limit at this point in his career without draining himself.

That’s an absurd amount of time to be out of the ring, but that’s what Dirrell has had. It would be good for Dirrell to start getting active after his fight against Caparello on April 29th, because if he’s ever going to make something happen with the time he has left, then he’s going to need to be able to fight at least three to four times per year. Fighting once a year isn’t going to cut it for Dirrell, I hate to say.

Anthony Dirrell is coming off of a one-sided 10 round unanimous decision victory over former world title challenger Marco Antonio Rubio last September. Dirrell won all 10 rounds of the fight, as he was simply too big and too fast for Rubio, who really doesn’t look like he belongs in the super middleweight division. Dirrell lost his WBC 168lb title in a 12 round majority decision loss to Badou Jack last April. There wasn’t a rematch between Dirrell and Jack for some reason, which was unfortunate because it would have been nice to see if Dirrell.

I see Dirrell easily beating Blake Caparrello by a knockout in this fight. Caparello was knocked out in the 2nd round by Sergey Kovalev in their fight in August 2014. Since then, Caparello has won his last three fights against weak opposition.

« Shannon Briggs in London looking for Haye, Joshua and Fury