Should Caleb Plant have been forced to cut his beard?

By Allan Fox: Caleb Plant was allowed to box with a full beard that appeared to elongate his head for his fight last Saturday night against Anthony Dirrell in New York.

Like this writer, Teddy Atlas wonders why the New York commission didn’t say something about the length of the former IBF super middleweight champion Plant’s beard, as it appeared to be at least three inches in length or perhaps longer.

As Atlas pointed out, having a long beard could be a problem for the opponent if they were cut and the fighter rubbed their wiry hair into the wound, worsening it.

Having a beard of that length for a boxing match is something that could potentially cushion the blows for the fight but also throw off the opponent for the actual target.

If the opponent is aiming their punches at the chin of the opponent, they could miss their target and hit only the beard due to its length of it.

Atlas was surprised that Plant (22-1, 13 KOs) wasn’t told to trim his beard because he says in the old days, fighters wouldn’t be able to box with that much facial hair.

If your Dirrell, it couldn’t have been a good thing trying to aim his punches on Plant’s billy goat’s gruff because he wouldn’t know where his chin ends and the actual beard begins.

Dirrell didn’t complain about it, but he perhaps should have because Plant’s beard made him resemble one of the cast members of the old Duck Dynasty show.

If the commissions aren’t going to do anything about boxers fighting while wearing long beards, they should at least set a limit to the length. It would be troubling if a fighter came into the ring with a beard down to his navel.

“I don’t think commissions do their job anymore. In the old days, there were rules, there were standards,”  said Teddy Atlas to The Fight, talking about Caleb Plant being allowed to fight Anthony Dirrell with a long beard last Saturday.

“I’m looking at the beard on Plant, and I’m not saying it had any impact on the fight. It didn’t. But it was two or three inches thick.

“Dirrell had one too, but it wasn’t as thick. I’m saying, ‘Wait a minute. There used to be a rule, a real rule in real commission states, where you couldn’t have that. What happened to those rules?

“I had to say that because I wonder if there were any other fans out there that were watching the fight and they were thinking, ‘Yeah, that beard was kind of crazy. I was wondering why was it allowed?‘

“I guess everything is allowed nowadays. That’s part of the problem. When you allow everything, then what’s wrong? What’s not allowed anymore?

“The point I’m making is back in the old days; you couldn’t have a big beard. The commission, the day before the weigh-in, would say, ‘Hey, you got to shave that, and if you don’t shave that and you come back in the locker room with that beard, we’re going to give you a razor, and you’re going to shave it before you’re allowed to get in the ring.’

“There was a certain length. I’m not sure if it was an inch; whatever it was that you couldn’t have too much growth. Why? For a couple of reasons. It could buffer the punch a little bit, maybe, and cushion the blow.

“Maybe some fighters do it for that reason. Maybe they just do it because they like beards. Also, in the old days, if a guy got a cut and you got inside with him, you could use your beard to grind into that cut a little bit.

“I know it sounds grotesque, but it’s a tough business, people. So they would limit the beard, but now there’s no limits to anything.

“Part of that level of respect should be the code of conduct in how you carry yourself professionally in the corner. It’s like anything is allowed,” said Atlas. 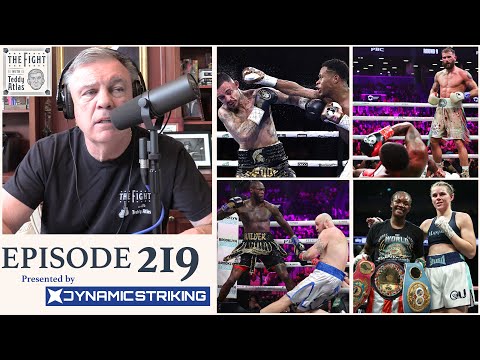