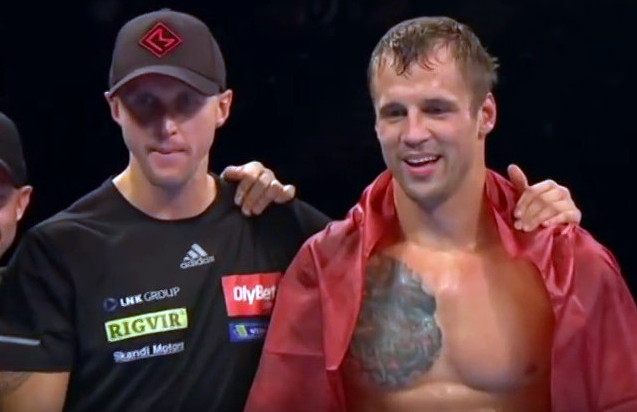 By Scott Gilfoid: Undefeated Mairis Briedis (22-0, 18 KOs) won a one-sided 12 round unanimous decision over former WBO champion Marco Huck (40-4-1, 27 KOs) to win the vacant WBC cruiserweight title on Saturday night at the Westfalenhalle, in Dortmund, Germany. The final judges’ scores were 116-111, 117-110 and 118-109. Boxing News 24 scored the fight 12 rounds to 0 in favor of Briedis. This is the WBC title that was recently in possession of Tony Bellew, who was unable to defend it due to a hand injury he suffered in his last fight against David Haye.

The jabs from Briedis were key tonight in him winning a fairly one-sided fight. Briedis continually came forward and hit Huck with head-snapping jabs that threw him off completely. Huck’s right hand power shots missed all night long. He wasn’t able to and that punch with any kind of consistency. Huck’s left hook, which is usually one of his primary weapons, was completely missing from his arsenal tonight. Huck wasn’t throwing his left hook for some reason; perhaps it was because Briedis was quick to counter him with his right hand when he would throw his wild lefts.
The fight had a lot of holding, and head-locks that were initiated by both fighters. There was also a ton of head clashes. Thankfully, neither fighter was cut from the head-butts.

Huck did next to nothing on offense the entire fight. About the only occasions where Huck was able to land anything at all was when he would be in a clinch. He would reach around and hit Briedis with a clubbing right hand. Briedis was very strong on the inside, and he made sure that he Held Huck tight in the clinches to keep him throwing his rabbit shots to the back of the head. You’ve got to give referee Jay Nady a lot of credit for him keeping the fouling from Huck under control in the fight, because he warned him when he would throw a rabbit shot. Nady was also warning Briedis for his punches to the back of the head, because he attempted several of them during the contest. Briedis normally doesn’t throw rabbit shots, but he seemed to be following Huck’s lead when he started to make the fight dirty.

Huck, 32, did not do well enough to win any of the rounds tonight. He was beaten to the punch in every round of the fight by the faster, stronger, and more highly skilled Briedis. In the 11th round, Briedis fell down while being manhandled by Huck. It didn’t count as a knockdown. Huck attempted to hit the Latvian Briedis with a rabbit punch when he had his back to him briefly. It looked very dirty on Huck’s part. By that point in the fight, Huck was totally desparate, as he’d been completely out-boxed by Briedis in every round of the fight. The judge that scored the fight 116-111 in Briedis’ favor had the fight far too close. Believe me, the fight was one-sided. Huck didn’t have the speed or the talent to do much in the fight.

In round 1, neither fighter did much in terms of letting their hands go. In the last 10 seconds of the round, Briedis landed several nice clubbing shots to the head of Huck that caused him to tie him up. That was the best action in the round.

Briedis jabbed Huck in round 2, and controlled the round from the outside. In the last seconds of the round, Briedis opened up with a flurry of big power shots that nailed Huck repeatedly. At the end of the round, Huck hit Briedis with a left hand rabbit shot to the back of the head. Sadly, that was Huck’s best punch of the round and it was an illegal blow.

Round 3 was completely one-sided with Briedis hitting Huck with pot shots again and again. Briedis showed in that round that he had too much hand speed for Huck to deal with. The last seconds of the round saw Briedis hitting Huck with some monstrous shots to the head and body. The difference in power between the two fighters was clearly evident in this round, as Briedis’ shots were landing with much authority than Huck’s.

Round 5 was completely one-sided with Briedis hitting Huck at will. Huck looked like a totally shot fighter in the round. He showed no boxing skills at all, and no defense to try and get out of the way of Briedis’ hard power shots.

The 6th and 7th rounds were dominated by the sharp punching from Briedis. Huck had no clue what to do. He wasn’t fast enough to evade the big power shots from Briedis. The only thing he could do was grab the Latvian fighter in a clinch and attempt to club him. There was no way that Huck could win the fight like that.

Round 8 was Huck’s best round of the fight. He outworked Briedis through most of the round. Briedis landed a big right hand in the last part of the round that was enough for me to give him the round. Huck’s shots were nowhere near as good as that big shot from Briedis.

Huck didn’t look like the same fighter that he once had during his best years as the WBO cruiserweight champion. Huck’s boxing skills were never great to begin with, but he’s been looking like a shell of his former self in his last 3 fights, especially in his last contest against Dmytro Kucher. Tonight, Huck didn’t show any ability to do much at all. When Huck would attempt his all out attacks in the rounds, Briedis would back up and nail him with shots down the middle that would stop him in his tracks. Briedis would also stand his ground and grab Huck in a tight clinch to shut-down his offense.

Briedis’ defense was superb tonight. He had a way of using feigns to throw off Huck’s timing. When Huck did throw his shots, he would miss because he wasn’t sure if Briedis was going to let his own hands go. Huck looked totally confused with what Briedis was doing inside the ring tonight. Briedis is so different from anyone that Huck has fought before. There was no way for Huck to prepare for what he was dealing with.

Tony Bellew, the former WBC cruiserweight champion, was lucky that it wasn’t him inside the ring tonight instead of Huck, because I think he would have been knocked out. Briedis would have been all over the stork-like Bellew, hitting him with power shots and having an easy time. Bellew said this week that he’s going to move back down to cruiserweight and unify all the titles in the division. I wish Bellew a lot of luck in him attempting to do that, because I don’t think he’s going to be able to do anything at all against Briedis. I see that as a mismatch in favor or Briedis when/if the fight ever happens. Bellew is the WBC Emeritus champion, which means he can challenge for the title whenever he wants. I’m not going to hold my breath waiting for that to happen.

Other boxing results on tonight’s Briedis vs. Huck card: