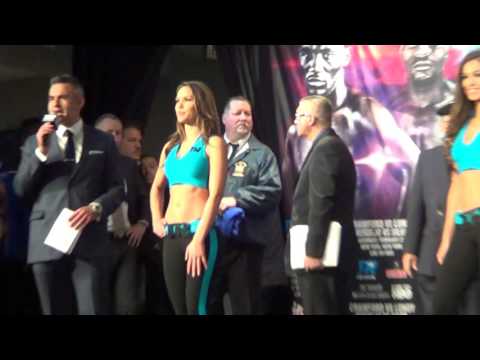 By Chris Williams: WBO light welterweight champion Terence “Bud” Crawford (27-0, 19 KOs) and #10 WBO challenger Hank Lundy (26-5-1, 13 KOs) both made weight on Friday for their fight on HBO Boxing After Dark on Saturday night at Madison Square Garden in New York. Crawford weighed in at 139.2lbs. The 32-year-old Lundy weighed in at 138.2lbs.

The Crawford-Lundy fight is thought to be a mismatch, as Lundy has lost two out of his last three fights to Mauricio Herrera and Thomas Dulorme since 2014. It’s surprising that HBO even approved this fight because it’s a mismatch on paper, and you normally don’t see world champions defending their titles against a challenger that has lost 2 out of their last 3 fights.

It sets up a mismatch when promoters put together fights like this and HBO should have thought twice before giving the green light to this potentially bad product. Crawford is someone that HBO is high on, however.

It obviously makes Crawford look good if he can wipeout a no-hoper like Lundy on national television. The casual boxing fans probably don’t know that Lundy is quickly heading towards journeyman status and 2nd tier. The hardcore fans obviously are well aware the Crawford-Lundy fight is a mismatch, which is why there has been so little interest in this fight.

Crawford’s promoter Bob Arum wants to turn him into a star, but that’s not going to happen with Crawford fighting the likes of Lundy, Dierry Jean and Dulorme, Arum is going to need to start working with other promoters to have Crawford fight their guys. I don’t think Crawford can become a star facing just Arum’s Top Rank stable fighters over and over again, or the little known struggling fringe contenders that are not promoted by serious competitors.
“Once I get on pay-per-view and keep putting on great performances like I have been, it will all fall into place,” Crawford said via RingTV.com.

I doubt think that Crawford is going to become a pay-per-view attraction during his career. He’s not heading in that direction. If IBF/IBO/WBA middleweight champion Gennady Golovkin isn’t a pay-per-view attraction despite being very popular, then there’s no chance of Crawford becoming a pay-per-view star. He doesn’t have the exciting style of fighting that Golovkin has going for him, doesn’t have a built in fan base like someone like Saul “Canelo” Alvarez, and he’s not fighting the right people.

Crawford shoved Lundy during the final press conference when the two fighters stood for the face off. It was a pretty hard shove, and fortunately for Lundy, he wasn’t hurt.

Even if Arum were able to match Crawford against the fading Manny Pacquiao, I still don’t think Crawford would become a pay-per-view attraction. I think Crawford is in the same boat as Tim Bradley is in terms of popularity.

For Crawford to turn things around and become a pay-per-view attraction, he would need to immediately start being matched against guys like Danny Garcia, Postol, Keith Thurman, Shawn Porter, Adrien Broner, Canelo, Golovkin, Bradley and Amir Khan. Crawford would need to beat those guys, and he would need to move up to the welterweight division. He’s not going to become a big PPV start in the 140lb division. That’s a serious dead end for Crawford.

If his management hasn’t told him yet, they need to explain to Crawford that he must move up to 147 as soon as possible if he wants to become a PPV star. He’s 28, and not getting any younger.

“The only fight that I was looking like, ‘Man, this fight could take my career to a whole ‘nother level; the only fight out there is Pacquiao,’” Crawford said. “A lot of people said (WBC titlist Viktor) Postol but Postol is not even from the United States, so who knows him? Only real boxing fans know who Viktor Postol is. Pacquiao is the only fighter that is currently in our stable that will take my career to the next level because he’s already a superstar and, to be a superstar, you have to beat a superstar.”

Crawford will beat Lundy, but no one will care because it’s a mismatch. Crawford is being put in with a guy with 2 defeats in his last 3 fights. Crawford needs to put some head under Arum’s backside to get him to start matching him against better fighters if he really wants to become a PPV star. It’s no use matching him against the likes of Lundy. Crawford needs opponents that actually have a chance of winning the fight, and that can put pressure on him to get him to start fighting in a more exciting manner.

Crawford is a counter puncher, and many of his fights are very boring to watch in my view. He holds a lot, jabs, and just boxes his opponents. He’s not Golovkin, who looks to take his opponent’s head off. Crawford isn’t like Floyd Mayweather Jr. He doesn’t have Mayweather’s hand speed and quick reflexes. That’s why Crawford needs to make up for his less than thrilling fighting style by facing only the best, because that’s the only way he can become a star. Crawford is a blue collar fighter, and he doesn’t have the overall talent or the charisma to make the leap to a PPV star unless something drastic happens in terms of his match-making.