Pacquiao vs. Crawford could be at 140 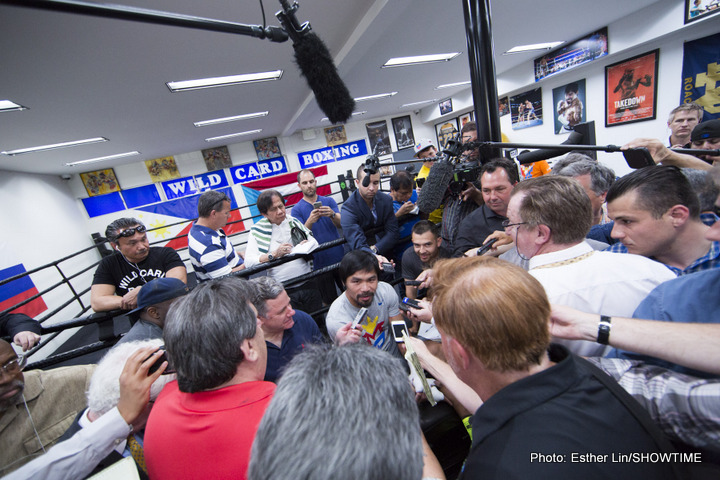 140 is an easy weight for Pacquiao to make because he rehydrates to 144 for his fights. He’s already right there in proximity of 140 without him having to take a lot of weight off. Crawford is going to have a weight advantage over Pacquiao anyway.

Last Saturday night, Crawford rehydrated to 156 pounds for his title defense against Dierry Jean. Pacquiao could find himself out-weighed by Crawford by a minimum of 12 pounds. That’s a lot of weight. I doubt that Pacquiao will ask for a rehydration limit to keep Crawford from rehydrating to middleweight.

Pacquiao hasn’t said whether he’ll accept the fight or not against the 28-year-old Crawford, but given that Arum wants him to take that fight, it’s a pretty good indication that we’ll be seeing him agree to it shortly. With all the talk that is being done about the Pacquiao-Crawford fight, it might be difficult for Pacquiao to stand up and resist that idea by telling Arum to go find him an opponent with a fan base like Amir Khan so that he can make some good money in his final fight.

Pacquiao plans on retiring after his April 9th fight if he gets elected into the senate in the Philippines. It’s not a lock that he’ll get elected, but there’s obviously a very good chance that Pacquiao will win the position and then retire shortly thereafter.

“Manny and Terence would be a hell of a fight,” Arum told ESPN.com. “But Manny has to make that decision who he fights for his last fight. Manny has to look at the tape first, and we have to see what the result of Nov. 7 is, and then we’ll take a look after that.”

Whoever Pacquiao fights next in April, I’d be willing to bet that it’ll be one of Arum’s Top Rank stable fighters rather than someone who can make Pacquiao some real money like Khan. Is it self-serving of Arum to want Pacquiao to fight one of his own guys like Crawford, Brandon Rios or Tim Bradley?

That’s for the boxing fans to decide. But we do know that Pacquiao has fought a lot of Arum’s Top Rank fighters in the past, and if he elects to face yet another one, he’d be doing basically what he’s done quite frequently. It just seems to work to where Pacquiao winds up facing Arum’s fighters. I suspect that Pacquiao won’t disappoint Arum by breaking that pattern on April 9th.

Crawford will likely be getting a career high payday even if he accepts the kind of money that Chris Algieri got for his fight against Pacquiao last November. It’s a fight that Arum will be able to make in his sleep due to him promoting both guys.

I don’t know if it’s the best fight for Pacquiao though. I can’t imagine fighting a counter puncher with the type of fighting style like Crawford has as being a good style for him. Crawford fights on the outside, leans backwards to avoid shots, and jabs a lot.

In the minds of some boxing fans, Crawford is a poor man’s version of Floyd Mayweather Jr. once you take away Mayweather’s hand speed, reflexes, mobility and defensive skills. Crawford isn’t better than Mayweather in most departments. He just has better power than him. Crawford isn’t as fast or as powerful as Pacquiao. In terms of a fight that would be good for Pacquiao, it’s not a good fight for him.

Arum wasn’t in favor of matching Pacquiao against Saul Canelo Alvarez, because he saw that as a bad fight for Pacquiao, but the Crawford is not good one either. Pacquiao is coming off of a bad injury to his right rotator cuff, and he’s always had problems against counter punchers in the past. Now Arum is asking Pacquiao to fight another counter puncher and that’s just not good for Pacquiao. It’s the wrong style and at the wrong time of his career.

Arum would be better off matching Pacquiao against Khan, because he would mix it up more with Pacquiao and the fight would generate a lot more interest worldwide. The publicity for a Khan-Pacquiao fight in the UK would be huge. Khan is well-spoken and clearly the better talker than Crawford, who says very little in his interviews.

Khan can talk all day long, and he does a good job of coming up with new things to say in his interviews. The money would have to be better for a Khan vs. Pacquiao fight than a Pacquiao vs. Crawford fight. The only thing is it wouldn’t be an all Top Rank fight with Arum in control of everything as far as the promotions.

There would be no positive gain for Arum or Top Rank if Khan won or lost like there would be for Top Rank if Pacquiao fought Crawford. Arum would be increasing the value of Crawford to his company if he made the Pacquiao-Crawford fight. This would in turn yield positive results in the future for Crawford’s other fights.

I don’t know how Arum will approach Pacquiao to try and convince him to fight Crawford. Perhaps Arum won’t even try and talk him into taking the fight. But with Pacquiao already knowing that Arum wants him to fight Crawford, he could look to please his 83-year-old promoter one last time by looking to give Crawford the fight in order to pass the torch to him rather than facing a guy that could make arguably a lot more money for him by facing Khan.

« Provodnikov: My goal is to become world champion