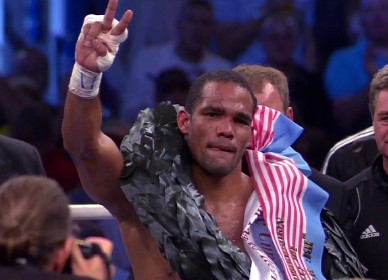 By Scott Gilfoid: IBF cruiserweight champion Yoan Pablo Hernandez (29-1, 14 KOs) will be defending his title against IBF interim champion and former WBO belt holder Victor Emilio Ramirez (22-2, 17 KOs) on October 2nd in Buenos Aires, Argentina, according to news from Dan Rafael. This venue will give the 31-year-old Ramirez the home country advantage, which might help him a bit but not a whole lot.

Ramirez is a pretty primitive fighter in the Marco Huck mold, and he’s very beatable against certain types of fighters. Huck was able to beat Ramirez at his own game in defeating him by a 12 round unanimous decision to take his WBO cruiserweight title in 2009 in a slugfest.

Ramirez reacted negatively to the loss by choosing not to fight for four years from 2009 to 2013. He’s since won his last seven fights since making his comeback in 2013. Recently, Ramirez defeated former world title challenger Ola Afolabi by a 12 round unanimous decision last April to capture the IBF interim cruiserweight title.

Other than his loss to Huck, Ramirez’s only other defeat in his career was to little known fighter Sebastian Ignacio Ceballos in 2006.

Hernandez, 30, has been out of action for an entire year with an elbow injury since last September when he defeated Firat Arslan by a close 12 round split decision.
The southpaw Hernandez has held down the IBF cruiserweight title since 2011, when he beat Steve Cunningham by a 12 round decision by a 6th round technical decision. Hernandez has since beaten Cunningham in a rematch, Troy Ross, Alexander Alekseev and Arslan.

Ramirez briefly held the WBO cruiserweight title in 2009 and defeated Ali Ismailov in May of that year before losing his title to Huck by a 12 round decision loss in September of 2009.

Former world title challenger Matt Korobov (24-1, 14 KOs) will be back in the ring on September 11th to fight an opponent still to be determined in an 8 round bout on the undercard of WBO light welterweight champion Terence Crawford’s first defense of his WBO title against 2nd tier fighter Dierry Jean. It’s a Top Rank card. The 32-year-old Korobov’s fight won’t be televised, but the Crawford-Jean mismatch will be televised on truTV.

Korobov has been out of action since he was stopped by Andy Lee in the 6th round last December in a fight for the vacant WBO middleweight title.

If Korobov goes back to fight weak 2nd tier opposition like he’d previously been fighting pretty much his entire career up until the Lee fight, then I don’t see the guy ever going anywhere. Korobov spent the first five years of his career fighting weak opposition. It wouldn’t be a big deal except for the fact that he got a late start as a pro because of his long amateur career in Russia.

When you have a guy with as much amateur experience as Korobov had, you don’t waste five years of his career before you finally put him in with good opposition. I don’t think Korobov was brought along the right way. He was matched like a fighter with no amateur experience, and it was a huge waste for him. Top Rank did a much better job of bringing Vasyl Lomachenko along by having him immediately face quality opposition after he turned pro rather than burning up 5 years of his career matching him against scrubs with no long.

Korobov should have been fighting for a world title by 2010 instead of 2014. Just such a waste of time for him. He’s now 32, and about to turn 33, and he has nothing to show for those six years that he’s been a pro.

WBA “regular” heavyweight champion Ruslan Chagaev (34-2-1, 21 KOs) will be fighting a rematch against 42-year-old No.4 WBA Fres Oquendo (37-8, 24 KOs) on October 17th at the Sparkassen Arena in Kiel, Germany. The 36-year-old Chagaev already beat Oquendo by a 12 round majority decision last year in June of 2014 in a very, very dull fight. Oquendo is getting a second fight against Chagaev because he had a rematch clause in the contract. If Oquendo loses this fight as well, then I think that’ll end the rematch cycle. Oquendo will then have to work his way back into another title fight.

To get the fight for the WBA title last time, Oquendo only had to beat Galen Brown, Derric Rossy, Robert Hawkins, Joey Abell, and Travis Fulton. It would have been nice if Oquendo and Chagaev had to beat the likes of Lucas Browne, Tyson Fury, Shannon Briggs, Bryant Jennings, Luis Ortiz, Erkan Teper, Antonio Tarver, Joseph Parker and Alexander Ustinov in order to get a fight for the WBA heavyweight title. It was too easy last time for Oquendo.

All Chagaev had to do in order to get a fight for the vacant WBA heavyweight title was beat Jovo Pudar, Mike Sheppard, Werner Kreiskott, Billy Zumbrun and Kertson Manswell. I hate to be the one to tell the World Boxing Association how to do their jobs, but they should really set a higher example than that in letting fighters fight for their world titles. I mean, I have no problems with Chagaev and Oquendo fighting for the WBA title, but I think they should have done it by facing and beating at least 4 to 6 of the above mentioned heavyweights instead of the guys that they beat to get the title fight. The WBA made it too easy for them to fight for the vacant WBA title in my view.

I have a hard time seeing Chagaev as the WBA heavyweight champion, or even the WBA minor heavyweight belt holder, because I see a lot better heavyweights than him in the top 15 of the WBA’s rankings. It’s nice that the WBA thew a bone to Chagaev to allow him to fight for their title without having to beat some of the younger and more solid heavyweights, but I think it’s not a good thing for the sport it has a guy on top who I don’t rate as being worthy to hold down a title. I don’t even know if Chagaev is good enough to hold down the EBU heavyweight title, because I think the current champion Erkan Teper would blast Chagaev out if given the chance.

« Bellew: If I beat Yoan Pablo Hernandez, it makes me the best cruiserweight in the world