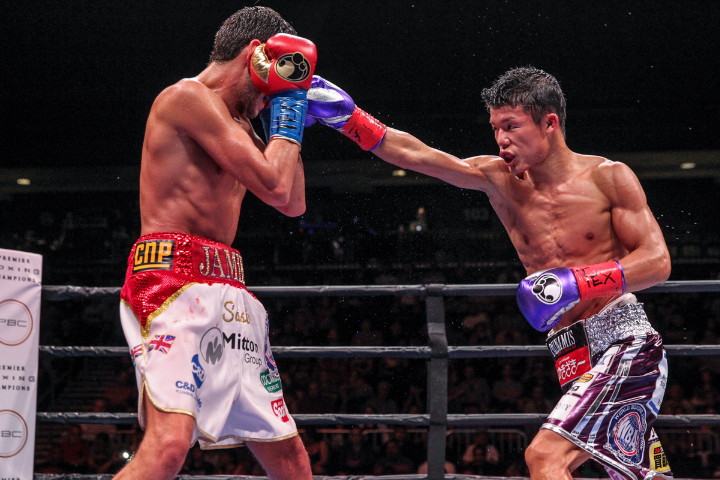 Dirrell looked incredibly talented in teeing off on Rubio with beautiful single power shots to the head. Dirrell did throw some combinations in the fight, but obviously not enough to get the stoppage. That was what was needed for the 30-year-old Dirrell to get a knockout in this fight, because Rubio was able to handle his single pot shots fine. It was when Dirrell threw combinations that Rubio looked troubled.

In the 1st round, Dirrell started off well in unloading on Rubio with a flurry of shots after hurting him with a right hand. However, Rubio was able to weather the storm to make it out of the round in one piece. That round was arguably the roughest for Rubio of all 10.

“I had an off night when I fought Badou Jack,” Dirrell said after the fight. “Definitely, I deserve another shot.”

Dirrell will need to get at least one or two more wins before he’s ranked high enough to get a crack at the winner of the Badou Jack vs. George Groves fight. I suspect that Dirrell will need to become the WBC mandatory challenger in order for him to get a fight against Groves if he beats Jack. No way do I see Groves giving Dirrell a fight in a voluntary defense. Groves will likely look to fight the likes of IBF champion James DeGale in a unification bout, and then face aother well-known British fighters like Callumn Smith, Rocky Fielding and Frank Buglioni rather than get inside the ring with a devastating puncher like Dirrell.

Dirrell suffered a slight cut over his right eye in the 8th round, but it wasn’t a big deal. The same eye was swollen from an earlier clash of heads with Rubio in the 6th round.

Rubio was making a move up in weight to the 168lb division after getting stopped in the 2nd round by IBO/WBA middleweight champion Gennady Golovkin in his last fight in October of 2014. Unfortunately for Rubio, it looked like he put on a lot of fat in moving up in weight rather than putting on muscle.

Rubio appeared to be carrying around an excess of 20 pounds of fat. I’m not sure that it would have made any difference tonight, because he was going to be over-matched against a talent like Dirrell no matter what kind of condition he came into the fight, but he at least would have had a better chance of winning if he had come into the fight in better condition.

I don’t think Rubio belongs at super middleweight. I think he should either move back down to middleweight or better yet junior middleweight, or retire. If Rubio is going to stay at 168, then I see him taking further beatings along the same lines as he suffered today against other fighters in the division. Rubio was fortunate today that he was fighting a pot shot fighter in Dirrell rather than a top super middleweight known for throwing combinations. A combination puncher would have made it extremely difficult for Rubio to have lasted more than four rounds. Rubio can’t afford to take the kind of punishment that he took in this fight, because it’s going to shorten his career. He’s already up there in age at 35, so he doesn’t need to be taking needless beatings in weight classes that he clearly doesn’t belong in like super middleweight.

In what has to be seen a controversial decision, the much bigger WBA World bantamweight champion Jamie McDonnell (27-2-1, 12 KOs) defeated Tomoki “El Mexicanito” Kameda (31-2, 19 KOs) by a 12 round unanimous decision in their rematch in the co-feature bout.

McDonnell got a questionable knockdown in the 12th round when Kameda’s back leg slipped on the canvas as he was getting hit with a rabbit punch in the back of the head. The referee for some reason counted the knockdown when it was clearly a slip. Either way, I don’t think the knockdown should have counted because Kameda was hit behind the head by McDonnell with that punch.

I think there needs to be another rematch because this decision was too controversial. I mean, the judge that scored the fight 117-110 for McDonnell had a wacky sport that didn’t make sense. The 116-111 score didn’t make sense either as far as I’m concerned.

By the 8th round, McDonnell was bleeding deep red blood from his nose after getting hit with a hard right hand from Kameda. It’s unclear if McDonnell had a nose injury or what, but the blood sure was red and it was running like a small river.

Kameda did a beautiful job of making McDonnell miss all night long with his power shots. Kamed’s defensive was impeccable. He had McDonnell tying himself in knots in trying to land punches.

I would have loved to have put McDonnell on a scale tonight before he stepped into the ring, because the guy looked like a welterweight in there compared to the much shorter and lighter looking Kameda. I mean, McDonnell looked like he was enjoying a weight advantage of at least 15 pounds at the minimum. I think McDonnell should be fighting in the super bantamweight or better yet the featherweight division. He’s huge for the weight class. I can understand why he wouldn’t want to move up in weight, because he’s got a good thing going for him in fighting smaller fighters at bantamweight rather than taking on guys his own size in the featherweight division.

« Roach: Cotto will beat Canelo, you can bet on it!