Roach: Cotto will beat Canelo, you can bet on it! 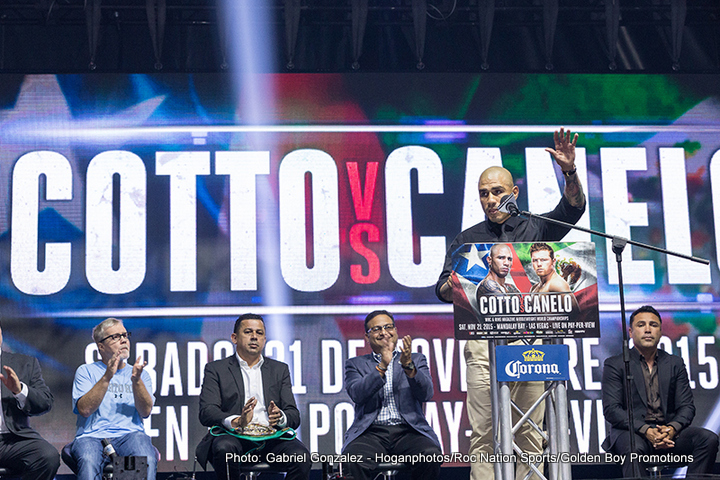 By Allan Fox: Trainer Freddie Roach is so confident that his fighter WBC middleweight champion Miguel Cotto (40-4, 33 KOs) will be winning his next fight against Saul “Canelo” Alvarez (45-1-1, 32 KOs) on November 21st that Roach is even telling the media that they can bet on the 34-year-old Cotto coming out on top against the 25-year-old Mexican fighter.

Roach believes that Cotto will get to Canelo in the later rounds of the fight to score a knockout. Roach isn’t saying but it appears that he thinks that the younger Canelo has stamina problems that Cotto will be able to exploit in this fight to his benefit.

Canelo does gas out in his fights when he’s taken to the second half of the fight and forced to fight for the full three minutes of every round. Canelo also turns red in the face and gasses when he’s forced to move around the ring a lot to chase an opponent. We saw that in Canelo’s loss to Floyd Mayweather Jr. in 2013.

Cotto’s best hope of winning the fight by knockout is definitely to go after Canelo in the later rounds rather than when he’s fresh. It’s already been proven in the past that Canelo loses energy late in his fights. He even gasses out early if he’s forced to fight hard in the early rounds. We saw Canelo looking tired in his recent fight against James Kirkland.

You can only imagine what would have happened to Canelo if that fight had gone into the later rounds. It might have been really bad for Canelo with him gassing out the same way Alfredo Angulo did in his loss to Kirkland.

I’m sure the media will be pleased to know that Roach is telling them to bet on his fighter Cotto to win, but unfortunately it’s a risky bet for this fight. To be sure, Cotto has won his last three fights against Delvin Rodriguez, Sergio Martinez and Daniel Geale, but he hasn’t faced anyone really difficult in the middleweight division as of yet to show that he’s improved over the fighter that was beaten in back to back fights by Floyd Mayweather Jr. and Austin Trout in 2012. Cotto hasn’t fought anyone as good since that fight. Geale used to be a decent fighter, but he’s old at 35 now, and he doesn’t have much punching power.

“I have the perfect training plan and strategy that Cotto comes out winner,” Roach said.

Unless Roach has lost his ability to analyze fighters, he’s very likely to have Cotto using movement for the full three minutes of every round for the 12 round bout. Roach won’t be foolish enough to have Cotto stand in front of Canelo in this fight. It’s not that Cotto doesn’t have the punching power to win. It’s more of a case of Canelo enjoying too much of a weight advantage in this fight.

Cotto will likely be a little over 160lbs when he steps foot inside the ring on November 21st; whereas Canelo will almost surely come into the fight at 175 or higher. The other reason why Roach won’t have Cotto standing in front of Canelo is because the Mexican fighter prefers to slug it out with his opposition. That’s the style that he was brought up with, so he’d be more than happy to get in the trenches to slug with Cotto if he elects to fight him in a brawl in this fight. Canelo doesn’t have the foot speed to handle Cotto if he decides to move for 12 rounds. But we don’t know if Cotto has the ability to move for a full 12 round fight. He’s never done it in the past, and it’s difficult to picture him being able to do it at 34, especially with Roach having him running only 3-4 days a week.

The Cotto-Canelo fight will be televised on HBO pay-per-view from the Mandalay Bay Resort & Casino in Las Vegas, Nevada.

Roach is making sure that Cotto doesn’t do too much working out for this fight. He’s backed Cotto off on his road work to 3 to 4 days ago rather than 7, because he feels that Cotto doesn’t need to work out as much now that he’s in his mid-30s. Roach said he tried the same thing with his fighter Manny Pacquiao, but he was resistant to the idea and continued to do a lot of roadwork. Pacquiao lost his last fight against Floyd Mayweather Jr.

« Dirrell vs. Rubio & McDonnell vs. Kameda today on PBC on CBS