Dirrell vs. Rubio & McDonnell vs. Kameda today on PBC on CBS 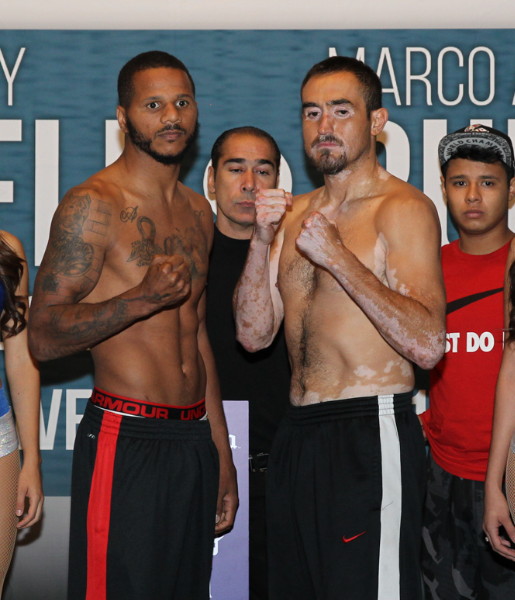 (Photo credit: Lucas Noon/Premier Boxing Champions) By Scott Gilfoid: The talented No.5 WBC 168lb contender Anthony Dirrell (27-1-1, 22 KOs) will be looking to bring the dog out in his game today in his 10 round clash against the hard hitting Mexican Marco Antonio Rubio (59-7-1, 51 KOs) on Premier Boxing Champions on CBS from the American Bank Center, in Corpus Christi, Texas.

For the Americans who might be worried about whether they can see this interesting fight, it’s on free television on CBS, starting at 4pm ET/1pm PT. It’s a great fight that promises plenty of action from start to finish. Originally when I saw that the fight was only scheduled for 10 rounds, I thought it was a bad deal, because for an exciting contest like this one, you want to see a full 12 round fight.

However, with the kind of devastating punching power that Dirrell and Rubio possess, I don’t think 12 rounds will be needed for this fight. I think it’s going to end well short of 12 rounds or even 10 rounds. Someone is getting knocked out in this fight, and I have a feeling that it’s going to be the 35-year-old Rubio. He’s the one moving up in weight from the middleweight division, where he was knocked out in the 2nd round in his last fight by IBO/WBA middleweight champion Gennady “GGG” Golovkin last year in October 2014.

Dirrell doesn’t consistently punch with the same kind of power that Golovkin does, but when he loads up with his single power shots, I believe that he equals Golovkin’s punching power. Dirrell has to load up on his shots with everything he’s got and throw with perfect form to connect with Golovkin-like power. We saw what Dirrell is capable of doing when he dropped Sakio Bika with a perfectly timed right hand in their first fight.

Dirrell lost his last fight to Badou Jack last April in a thrilling contest that could have gone either way. Dirrell would be the first one to admit it that he didn’t put his punches together by throwing combinations. He was too intent on looking to throw single pot shots, hoping to score a one-punch knockout like Derek Edwards had done when he stopped Badou Jack in the 1st round in 2014. It was a huge mistake on Dirrell’s part not to make adjustments half way through the fight when it was painfully obvious that he wasn’t going to be able to KO Jack. Instead of making adjustments, however, Dirrell continued to load up with single power blasts to the head, but Jack to his credit was ready for them.

Rubio fell apart literally in his last fight in getting stopped by Gennady Golovkin last October. He couldn’t handle Golovkin’s power, and he made a big mistake in trying to slug with him the same way that he did with David Lemieux in their fight in 2011. It was a mistake because Golovkin proved to be a better puncher than Lemieux had been, and Rubio wasn’t able to take the big shots from the hard hitting Kazakhstan fighter.

If Rubio is able to handle the power of the 30-year-old Dirrell and put pressure on him the same way Badou Jack did, then this could be a real nightmare for Dirrell. If he doesn’t improve from his last performance against Jack, Dirrell could be in for a world of hurt today against Rubio.

In the undercard, WBA “regular” bantamweight title holder Jamie McDonnell (26-2-1, 12 KOs) will be defending his title against Tomoki “El Mexicanito” Kameda (31-1, 19 KOs). McDonnell defeated Kameda by a narrow 12 round unanimous decision last May on Premier Boxing Champions in beating him by the scores of 114-113, 114-113 and 114-113. The 5’10” McDonnell hit the deck in the 3rd round after getting dropped hard by the bigger punching Kameda. However, the lanky Brit was able to get back to his feet and take over the fight in the last six rounds to squeak out a 12 round decision. Had Kameda not gassed out, I think he would have won the fight, because he was really working McDonnell over in the first six rounds of the contest.

I’m not sure that the 29-year-old McDonnell is going to be able to hold onto his title in this fight, because he looked terribly weak and weight drained at the weigh-in on Saturday from having to get down to the 118 pound bantamweight limit. McDonnell looks like a guy who has been fighting in the division for too long, and who needs to either move up to super bantamweight or better yet featherweight. Kameda looked a lot better at the weigh-in, and I see him being much stronger today with better stamina than McDonnell.

« Tyson Fury: Klitschko is getting knocked clean out and that’s a promise!

Roach: Cotto will beat Canelo, you can bet on it! »