By Dan Ambrose: Leo Santa Cruz (30-0-1, 17 KOs) and former three division world champion Abner Mares (29-1-1, 15 KOs) both made weight on Friday for their fight this Saturday night on Premier Boxing Champions on ESPN from the Staples Center, in Los Angeles, California.

Santa Cruz has never fought at featherweight before, so I don’t think he’s a good candidate to be fighting for a Super title. Mares hasn’t fought a good opponent in years since he was badly knocked out by Jhonny Gonzalez. Santa Cruz hasn’t fought a quality opponent since 2013, when he struggled to defeat Cesar Ceda.

Santa Cruz weighed in at 124.8lbs, and Mares 125.2. Both were under the featherweight limit of 126lbs. Santa Cruz towered over Mares during the face off, and he stared at him menacingly. Unfortunately that doesn’t mean anything, and we could very well see Santa Cruz beaten on Saturday night if he doesn’t find some hand speed somewhere by the time he steps foot inside the ring.

The World Boxing Council created the Diamond title in 2009 specifically for the Manny Pacquiao vs. Miguel Cotto fight. The WBC Diamond title is a special strap that the WBC pulls out every once in a while when there are two well-known elite fighters facing each other. In the case of Mares and Santa Cruz, the WBC sees this fight as being a big enough one to have their Diamond strap on the line.

Mares hasn’t done anything with his career in two years, so the Diamond title might not have been a great idea for this fight. It would have been good before Mares was knocked out in one round by Jhonny Gonzalez in 2013, but definitely not now, given how Mares has just burned through two years of his career fighting weak 2nd tier opposition.

The 27-year-old Santa Cruz has the advantage in power and with his ability to handle big shots. He’s a little younger than the 29-year-old Mares, and that could play a huge role in him getting a victory on Saturday night. Mares has a lot of ring wear on him from his many battles in the ring. It wasn’t until recently that he started focusing on his defense following his knockout loss to Gonzalez. I don’t think if the change has come in time for Mares.

Alfredo Angulo (23-5, 19 KOs) weighed in at 163 pounds for his fight against 5’8″ Hector Munoz (23-15-1, 15 KOs). Munoz weighed in at 159.8 pounds. Angulo is now fighting at super middleweight after starting his career out at junior middleweight. Angulo is going to need a lot of luck to try and make something happen at 168. 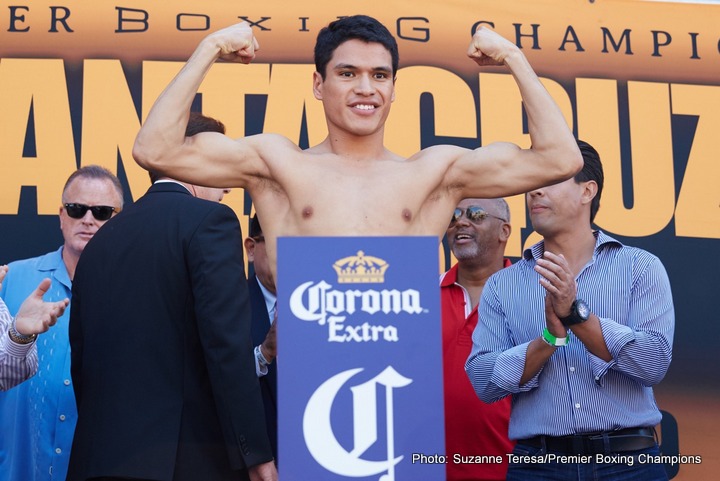 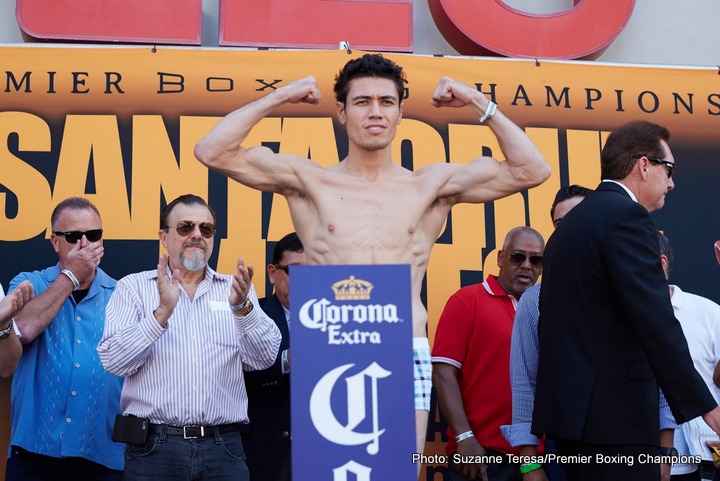 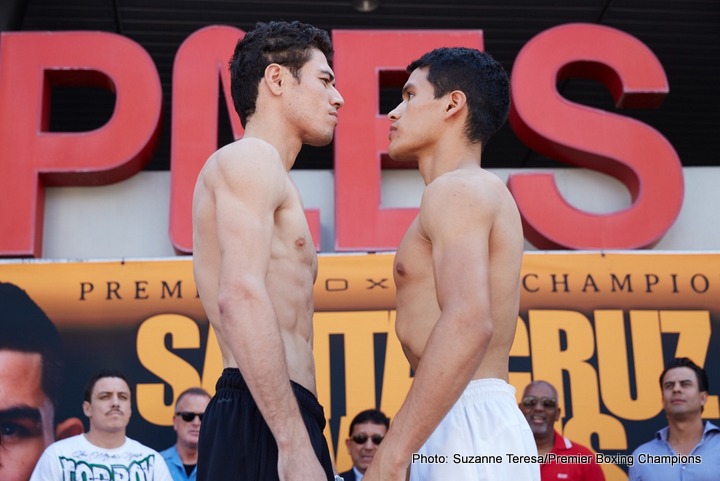 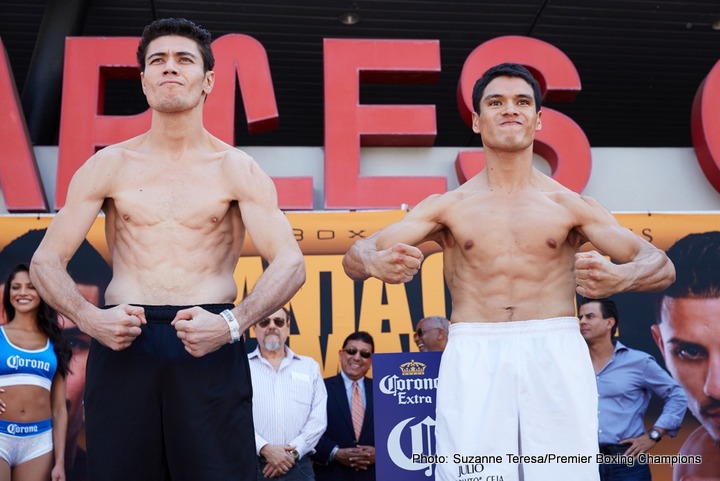 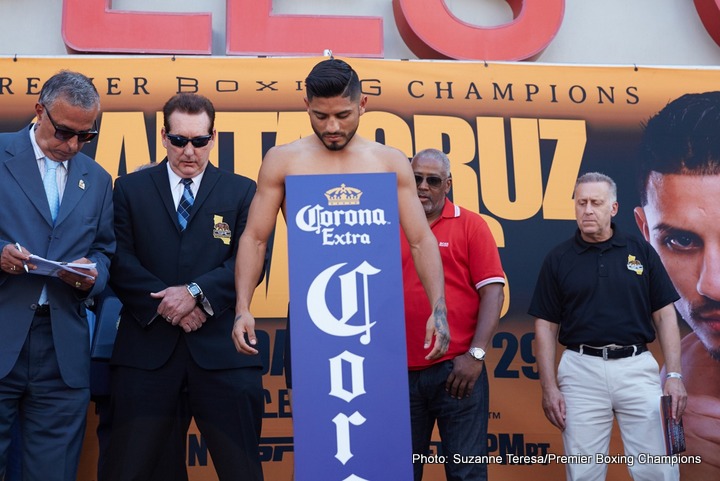 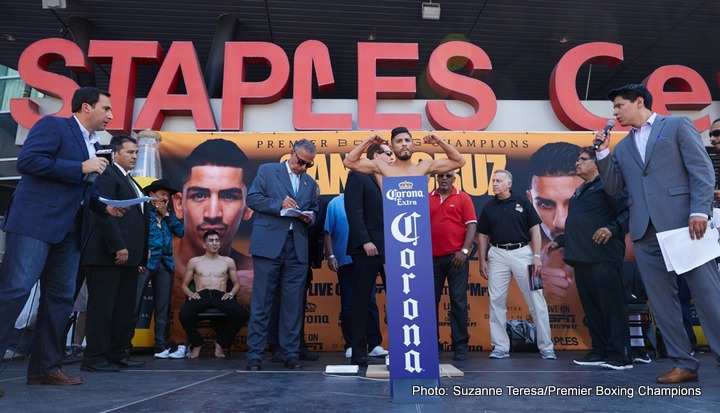 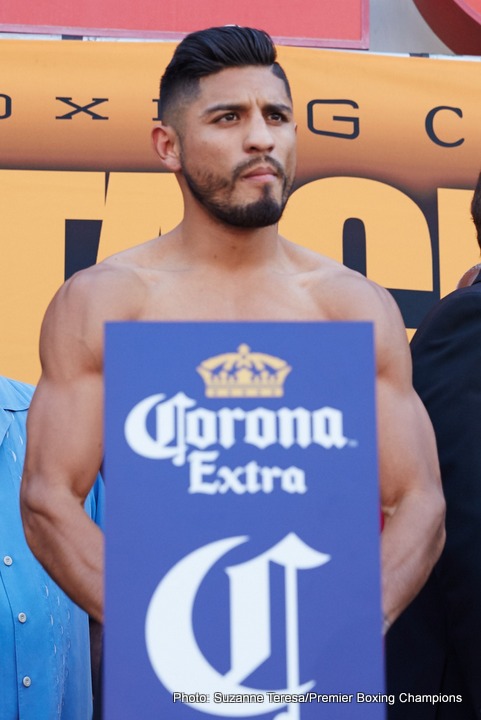 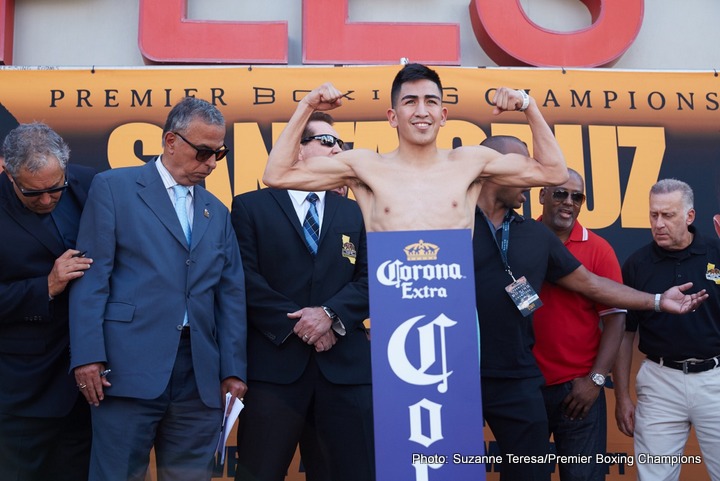 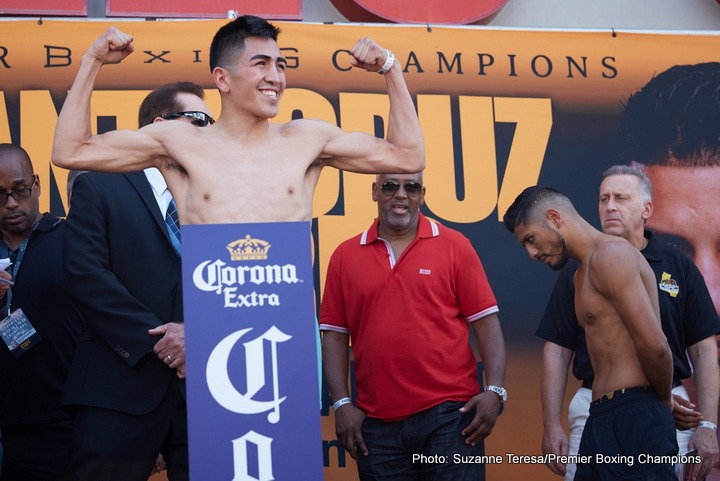 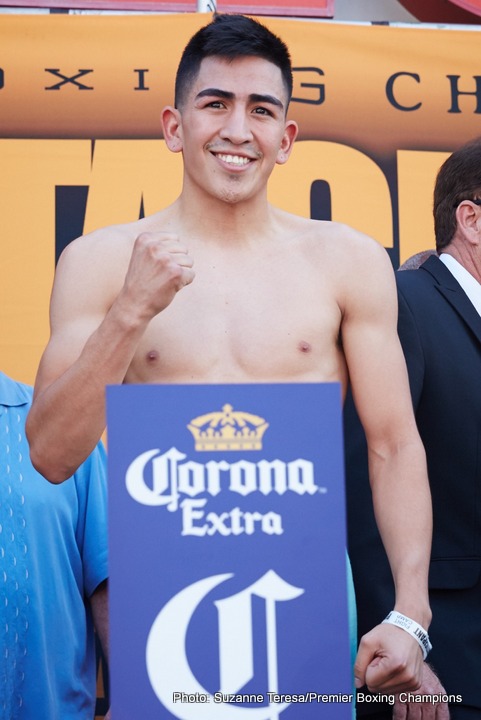 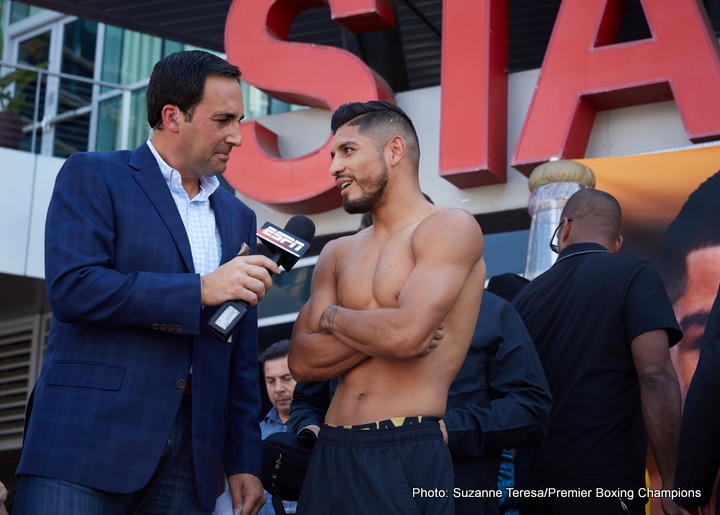 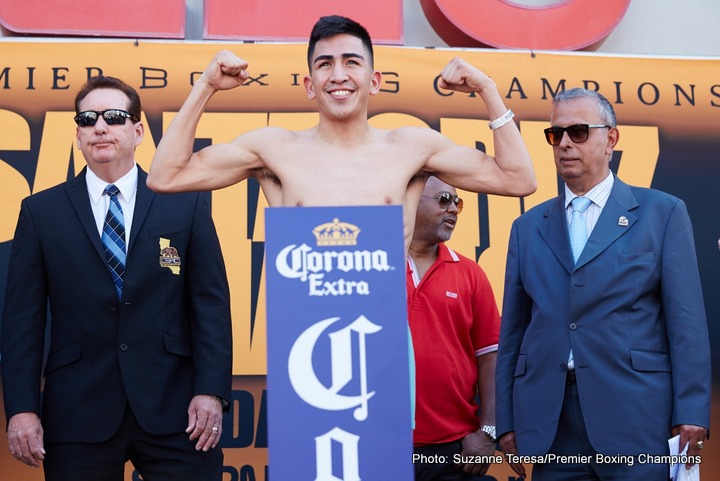 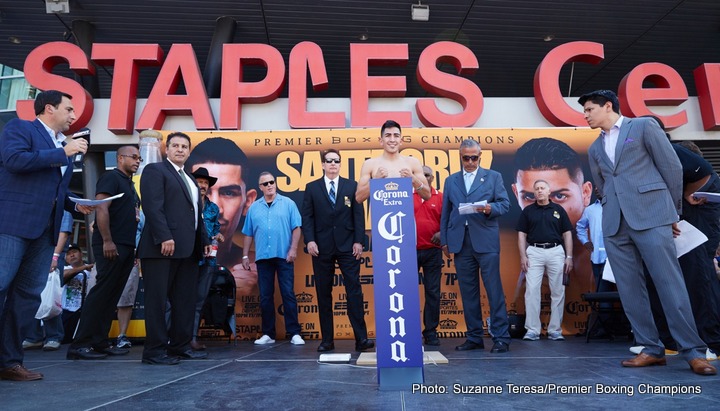 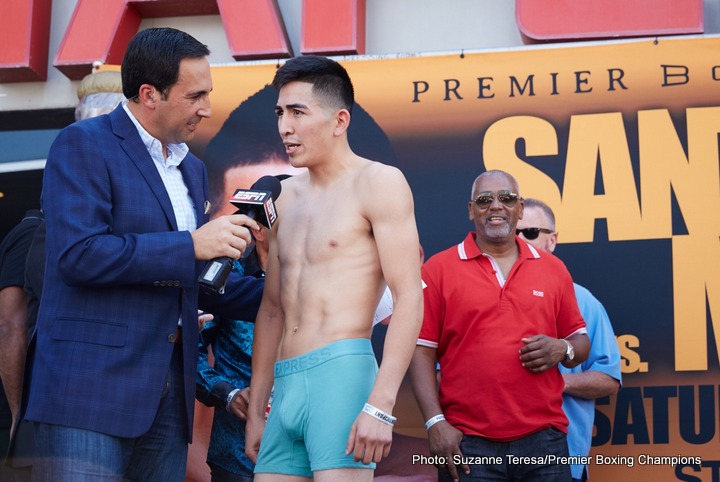 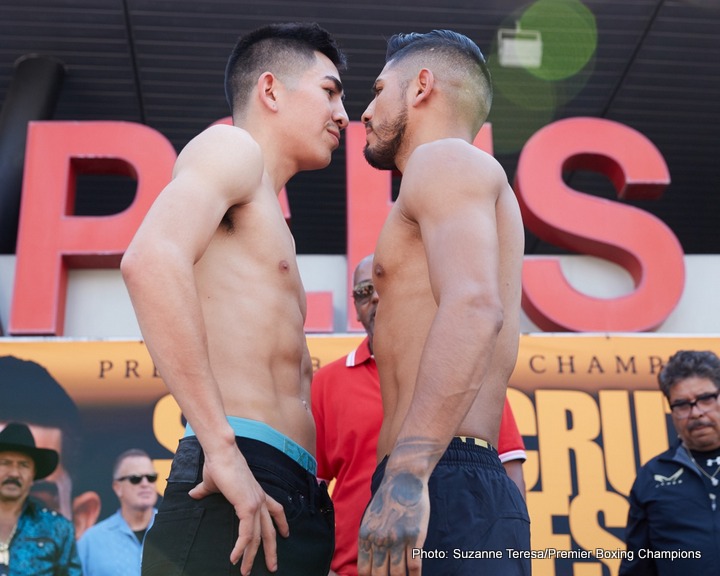 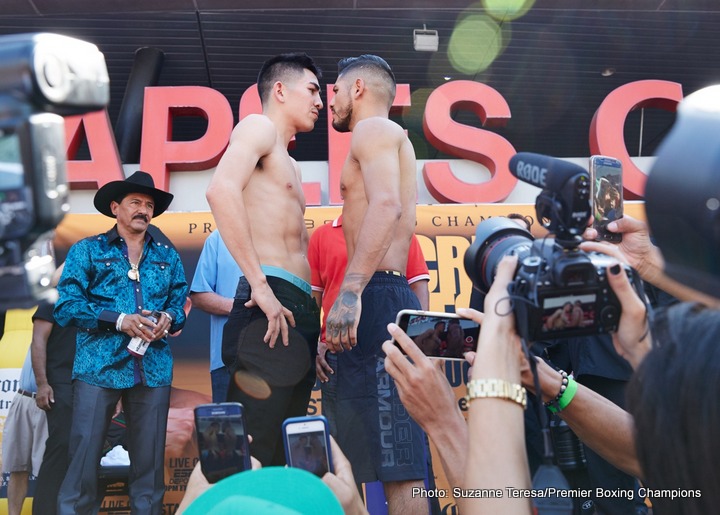 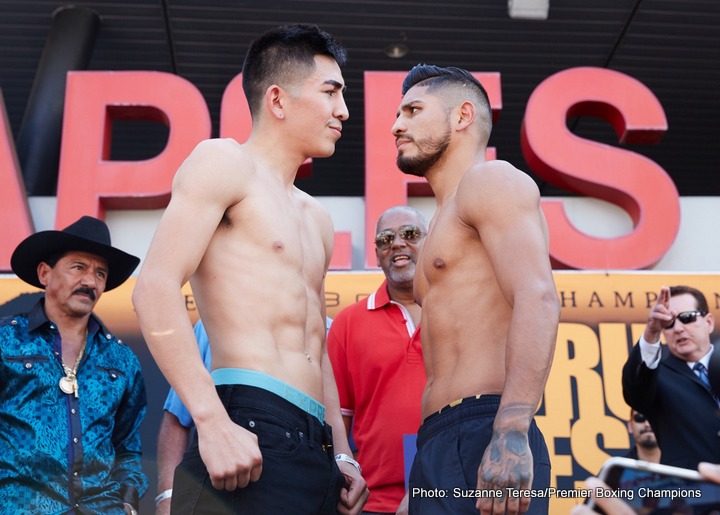 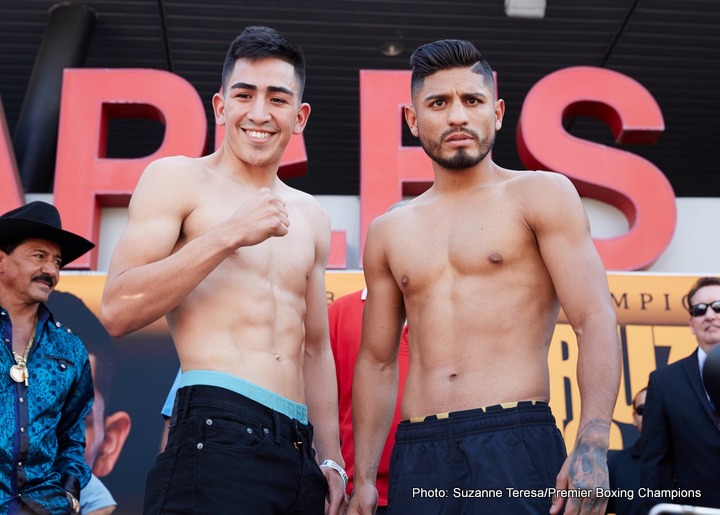 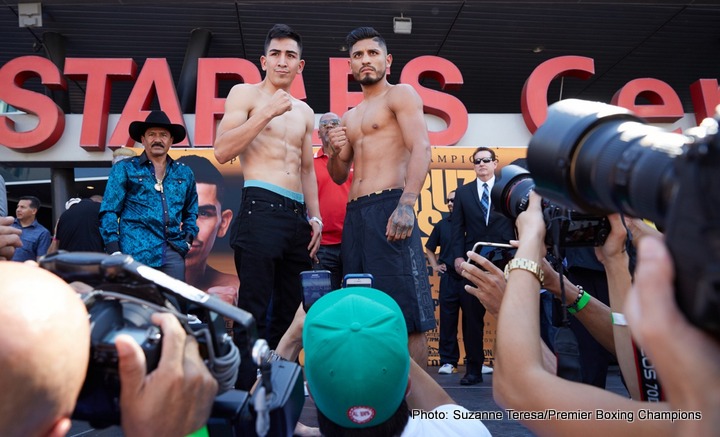 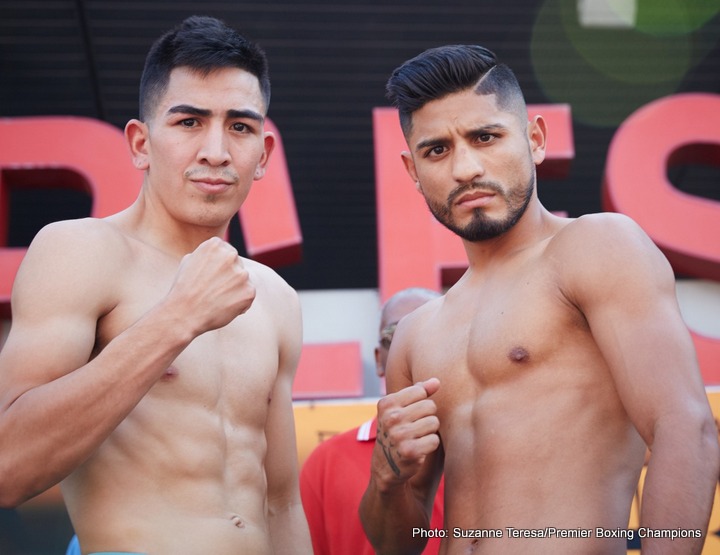 The official weights for the card: