By Charles Brun: One of the names WBA ‘regular’ featherweight champion Leigh Wood and his promoter Eddie Hearn are targeting for their next fight is former three-division world champion Leo Santa Cruz.

Wood performed more like a domestic-level talent against Conlan (16-1, 8 KOs) than an elite-level professional like Santa Cruz or Emanuel Navarrete.

Let me be the first to say that it would be a terrible idea for Hearn to let Wood fight Santa Cruz, especially after what he went through last Saturday against Conlan.

With the beating Wood took from Michael Conlan last night, it would be a good idea to rest for a while before thinking of challenging Santa Cruz.

The well-accomplished 33-year-old Santa Cruz (38-2-1, 19 KOs) holds the WBA ‘Super World’ featherweight title and is recognized by many as the true champion with the World Boxing Association at 126. Santa Cruz has the title that Wood and Hearn want to get their hands on in the worst way.

Hearn has been banging on about how Santa Cruz hasn’t defended his WBA 126-lb title since 2019, complaining that he should have been stripped by now. He hasn’t, so the ONLY way Wood will get his hands on that strap is by fighting him.

That is to say, the WBA title that Santa Cruz holds won’t be magically transmogrified and wind up around Wood’s waist without him fighting the talented Southern California resident.

As such, Wood & Hearn have a choice. They can either continue to bellyache 24/7 about how the WBA should strip Santa Cruz of his ‘Super World’ title or work for it by fighting him and trying to win it the usual way. This sense of entitlement is off-putting.

“If it’s Vegas for [Leo] Santa Cruz, we’ll see,” said Eddie Hearn about who Leigh Wood could fight next. “Kiko Martinez, if he wins, you do the fight in the City Ground [in Nottingham]. If Josh Warrington wins, there’s an argument whether we go City Ground or Elland Road [in Leeds].

Here’s a reality check for Hearn. I hate to say it, but the WBA will not give the Super World 126-lb title to Leigh Wood without him fighting the superstar Santa Cruz and beating him. Instead of Hearn griping about how the WBA hasn’t stripped Santa Cruz, he needs to set up a fight between him and Wood in Las Vegas, Nevada.

Santa Cruz might be a little too advanced of a fighter for Wood, who took a career-worth of punishment defeating Michael Conlan last Saturday night at the Nottingham Arena in Nottingham, England.

Given how tough that fight against the non-puncher Conlan was for the 33-year-old Wood, it begs the question, is he ready for a fighter like Santa Cruz?

What we saw last Saturday night was Wood having significant problems when Conlan was hitting him to the body. Seemingly each time Conlan went to the body, you could see the effect it had on Wood, causing him to back off or drop his hands, leaving his chin exposed.

Santa Cruz is arguably a far better body puncher than Conlan, he throws more punches per round, and he doesn’t make foolish mistakes by ignoring his trainer to fight off the ropes the way the Irish fighter did against Wood.

In addition to Santa Cruz being mentioned as a possible option for Wood’s next fight, Hearn said he’d like to match Leigh against the winner of the March 26th fight between IBF featherweight champion Kiko Martinez and Josh Warrington.

The Kiko vs. Warrington fight winner would be an infinitely more manageable task for Wood than putting him in with Santa Cruz right now.

As long as Warrington doesn’t foul up the contest by lowering his head and turning into a Billy Goat to ruin the fight by causing a cut stoppage like many boxing fans believed he intentionally in his rematch with former conqueror Mauricio Lara last September, it’s a very winnable match for Wood.

If you’re Hearn, it would be wiser to point Wood in the direction of facing the Martinez vs. Warrington winner rather than throwing him in with Santa Cruz and watching the equivalent of a feeding frenzy of a pack of hungry sharks on vulnerable Leigh. 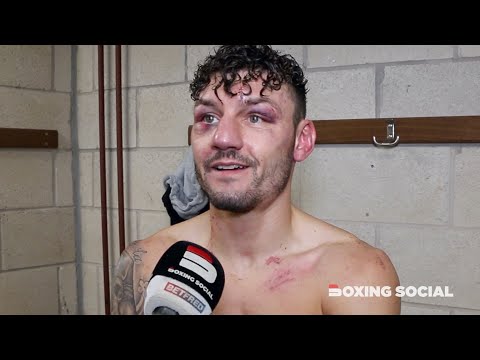 Jose Benavidez Sr. hoping Caleb Plant doesn’t “Back out” of fight with David »