By John Tornay: Newly crowned IBF featherweight champion Josh Warrington made it clear on Friday that he wants to fight WBA ‘Super’ champion Leo Santa Cruz next in the United States rather than face the WBA secondary champion Leigh Wood in a unification match.

In that fight, Warrington dropped the 36-year-old Martinez in the first round and got the better of him with his sustained combination punching.

In the seventh round, Warrington stopped Martinez by throwing a barrage of shots while he was against the ropes.

It was the first fight for Santa Cruz since his brutal sixth-round knockout loss at the hands of Gervonta ‘Tank’ Davis in October 2020.

Not surprisingly, Santa Cruz looked sluggish and not overly sharp in his victory over Carbajal, but that was to be expected given his long layoff.

If there were ever a time for Warrington to defeat Santa Cruz, it would be now at this late stage in the American’s career. Santa Cruz has a lot of miles on the odometer, and his recent knockout by Tank may have taken something out of him.

Afterward, some boxing fans were critical of Warrington over the high number of accidental headbutts he’d initiated during the contest, resulting in Kiko suffering cuts over both eyes and on his forehead.

The 36-year-old Spaniard Martinez looked cut to ribbons by the end of the fight, whereas Warrington’s face was unmarked. He did suffer a broken jaw, but we didn’t see the nasty cuts on his face as Martinez had suffered.

Warrington (31-1-1, 8 KOs) would be showing a lot of courage by taking on the former four-division world champion Santa Cruz (38-2-1, 19 KOs) because he’s an excellent inside fighter and has a high work rate just like him.

The last time Warrington left the comforts of home in Leeds, he was stopped in the ninth round by little-known fringe contender Mauricio Lara the previous year in February 2021 at the Wembley Arena in London, UK.

It would arguably be even more trying for the 31-year-old Warrington if he were to travel to the U.S to face the famous 33-year-old Santa Cruz in Las Vegas, Nevada, in his next fight.

Warrington may need to resist pressure from his promoter Eddie Hearn if he wants to take the fight with Santa Cruz because he made it evident after his win over the faded Kiko.

Hearn prefers that Warrington fight WBA secondary champion Leigh Wood next in the City Grounds in Nottingham. Wood (26-2, 16 KOs) is coming off a grueling 12th round come from behind knockout over Michael Conlan on March 12th in a fight that he appeared to be on his way to losing before his miracle stoppage.

A fight between Warrington and Wood would attract a massive crowd in Nottingham, and there would be good money to be made by both in this domestic-level clash.

But the downside would be that Warrington would be fighting for the lesser WBA 126-lb belt, as Wood is the ‘regular; champion with the World Boxing Association, below ‘Super Champ’ Santa Cruz.

Hearn also mentioned WBO 126-lb champion Emmanuel Navarrete as someone he’d like to see Warrington fight next, but it doesn’t appear that he was serious about that option.

Navarrete isn’t as popular as Santa Cruz, and he’s perhaps the best fighter in the 126-lb division today. It would be a terrible match-up for Warrington and not much for him to gain.

“Santa Cruz is a name I’ve been shouting out for a long, long time,” said Josh Warrington. I would never say no to going to the States. I’ve done everything I’ve wanted to do over here [in the UK]. It’s a personal goal I want to achieve in fighting in America against Santa Cruz in the States. So why not?

“I know Leigh Wood wanted to fight him, but I was here first. People keep writing me off, and that seems to bring the best out of me.

“It’s one of the things I’d like to put to bed,” said Warrington when asked if he’d like to try and avenge his loss to Mauricio Lara before his career ends.

“I’d seen a lot of people saying how dangerous he is, and I’m scared of him. That’s why I avoided him on purpose in the second fight. Yeah, I’d like to put that one to bed.

“Yeah, Mauricio Lara is a good fighter and he’s a dangerous puncher, but he’s not on the same level as a lot of the people in the last few years. I’d love to put that chapter to bed, that whole saga to bed.

Porter not impressed by Warrington

“I’m not very sold on Warrington either. He’s a very basic boxer and there’s nothing wrong with that. Speed, he’s an average fighter,” said Shawn Porter on the Porter Way Podcast in talking about Warrington following his stoppage win over 36-year-old Kiko Martinez.

“I hate to say bad things about somebody, but Warrington has quite a name, and I don’t think that he warrants having that name,” continued Porter.

“I was going to say that I don’t know if he has a reputation for being a hard hitter, but the knockdown in the first round, I had to rewind it. Did I blink? It was a nice overhand right, it was a good shot, but I did notice that he whips his shots.

“So in that torque, there could be a lot of power in those punches that he’s throwing there where I’m like, ‘Hey, I don’t see anything special, but there are way more than two punches right there.’

“But what I’m saying is I don’t see anything special or unique about him. Maybe that power is something that I don’t see visually, but the guys that are getting hit by it feel it. 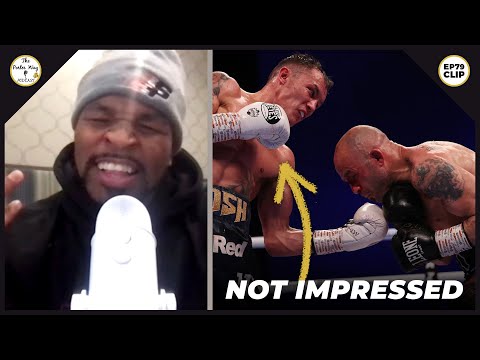 
« Kell Brook doesn’t have a lot of options, should have fought Conor Benn says Frank Smith