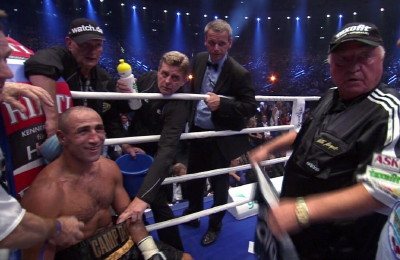 By Scott Gilfoid: WBO president Paco Valcárcel, Esq. shot down the idea of a title fight between WBO super middleweight champion Arthur Abraham (43-4, 29 KOs) and 36-year-old former IBF/WBA/WBO 160lb champion Felix Sturm (39-5-3, 18 KOs) for this year. Valcárcel, Esq. said in his tweet today that Sturm isn’t ranked in the top 15 by the World Boxing Organization at this time at 168.

This is bad news for Abraham’s promoter Wilfried Sauerland, who said that the Abraham-Sturm fight had to take place in 2015 for there to be any interest in the fight.

This doesn’t mean that the Abraham-Sturm fight can’t still take place. It just means that the fight would be a non-title fight. Sauerland will need to check that out with the WBO ahead of time just in case the WBO decides to strip Abraham for taking a non-title fight.

There shouldn't be any talk for a potential @ArthurAbraham– Felix Sturm fight, as the latter is not ranked by the @WorldBoxingOrg.

What would be easier would be for Sturm to take on and beat one of the WBO’s top 15 contenders at 168. This would surely get Sturm a top 15 ranking, and he could then go ahead and take the fight against Abraham before the end of the year.

“The fight must happen this year, because after that, Arthur Abraham has other commitments,” Sauerland said via Bild am Sonntag. “He has a mandatory defense and that takes precedence. It’s already late for the fight between Abraham and Sturm – but not too late. If it doesn’t take place in 2015, then it probably never will.”

You can understand why they might not have been too excited about facing each other back then, because the loser of the fight would have lost his title and that would have made it difficult for them to win another strap. It would also have put more stress on the winner because he would be defending two titles instead of just one.

Sturm is clearly not the same fighter he was years ago. He was beaten recently by Sam Soliman and Fedor Chudinov. Abraham isn’t the same fighter either, but he’s been fortunate with the WBO not ranking any dangerous contenders that he’s had to face.

I don’t see any point in a Sturm vs. Abraham fight. It’s too late for a fight between them because Sturm is clearly a shot fighter at this point in his career. Abraham might as well fight Robert Stieglitz again for a fifth time.