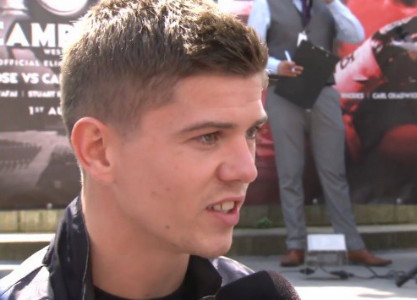 By Scott Gilfoid: In a card loaded with mismatches from top to bottom, #15 WBC lightweight contender Luke Campbell (11-0, 9 KOs) will be facing #7 IBF, #14 WBC Tommy Coyle (21-2, 10 KOs) in the feature bout tonight at the Craven Park Stadium in Hull, UK. Just why the 27-year-old Campbell is still facing domestic level opposition like the 25-year-old Coyle at this point in his career is unclear.

I mean, Campbell is a gold medal winner from the 2012 London, Olympics. Yeah, Campbell was involved in some controversial fights where appeared to lose in the eyes of some fans, but he really should have already stepped it up well before this point.

A fight against Coyle should have been done within Campbell’s first two fights. After that, Campbell should have been moved to facing top five competition like we saw with Vasyl Lomachenko. Instead, Campbell has burned up two years of his career fighting nobodies that he’s mowed down in quick knockouts.

Now he’s facing Coyle tonight in another waste of a fight. This isn’t going to be a competitive fight, which is why I’ve not focused too much on covering it. Campbell’s promoter Eddie Hearn has babied him by putting him in with awful opposition, and tonight’s fight will be a continuation of that trend.

Coyle is a good 2nd tier fighter, but he’s not someone that Campbell should be fighting at two years as a pro. Hearn has been matching Campbell like someone who didn’t have an amateur career for some reason. Hearn’s matchmaking is one size fits all type, where he matches all of his fighters against weak opposition until they get a world title shot. It’s such a waste and it’s so predictable that it’s not even funny.

My prediction for tonight is Campbell beating the stuffing out of the smaller, weaker and less skilled Coyle. Look for the fight to end before the 4th round, as Coyle is going to be batted around the ring like a baseball.

In a much more interesting fight, American journeyman Carson Jones (37-10-3, 27 KOs) will be facing former world title challenger Brian Rose (26-3-1, 8 KOs) in a fight at junior middleweight. This is a fight where the 31-year-old Rose will be looking to avenge his 1st round knockout loss from last February that he suffered at the hands of the hard hitting Jones.

I expect Jones to score another quick knockout, but this time it will be more conclusive with Rose being left on the canvas in a pile of broken flesh. Their last fight was halted quickly after Jones knocked the senses out of Rose with a right hand and had him staggering around the ring like a drunk on Saturday night.

Surprisingly, Rose has bellyached about the stoppage, saying it was premature and feeling like he could have come back. This is why we’re seeing a rematch between the two. Rose thinks he could have survived that round and came back to win the fight. If you saw the fight, you’ll know that there was too much time left in the round for Rose to be able to make it out of the round. Jones was teeing off with hard shots, and he was very patient in placing his punches well.

Jones would have been all over him at the start of the 2nd round, and would have kept nailing him with big right hands until Rose dropped for the 10 count. The problem is Rose just doesn’t have the chin to take a hard shot from a puncher like Jones. Rose couldn’t take Demetrius Andrade’s power and he won’t be able to take Jones’ punching power the second time around.

Prediction: Jones by 2nd round knockout victory over a badly hurt Rose.

Unbeaten heavyweight talent Dillian Whyte (14-0, 11 KOs) will be facing Brazilian Irineu Beato Costa Junior (17-4, 15 KOs) in a tune-up fight to get him ready for a clash against undefeated #2 WBC Anthony Joshua later this year in November or December. Costa Junior is a fighter that will give Whyte some valuable rounds before he gets knocked out by one of Whyte’s huge left hooks.

Whyte doesn’t feel the need to try and score a quick knockout victory over Costa Junior tonight to improve on the mark that Denis Boytsov, Joseph Parker and David Price did in knocking him out. Whyte says he wants to get some rounds in so that he can get some rust out of his system. As such, you can expect the Whyte-Costa Junior fight to go at least four rounds before Whyte obliterates him with a hard shot that Costa Junior won’t be able to get up from.

32-year-old lightweight contender Ricky Burns (37-5-1, 11 KOs) will be in action tonight in a mismatch against Prince Ofotsu (15-4, 11 KOs) in lightweight action. Burns has lost 3 out of his last 4 fights, and he’s in a dire situation to get a victory. He wants to get fights against top domestic level fighters like Kevin Mitchell and Anthony Crolla. The only way that Burns can do that is by beating Ofotsu, and looking good in doing so.

I don’t know if Burns can do. He looked good at times in his last fight against Omar Figueroa in his last fight, but he couldn’t sustain it. Burns was holding like no tomorrow and throwing mean rabbit shots one after another in his 12 round decision loss. I mean, it was a winnable fight for Burns if he’d just kept his mitts off of Figueroa and fought, but he just couldn’t stop holding.

The referee was finally forced to take two points off from Burns for his constant holding. What’s really sad is that even then, Burns couldn’t stop holding. You know things are bad when a fighter loses two points for holding and still refuses to stop grabbing onto his opponent.

I had the feeling that Burns was intentionally trying to get disqualified because he couldn’t stand the heat from Figueroa’s hard punches. Burns was getting royally battered by the hard hitting Figueroa and it seemed like the only thing he could think of doing was to grab him to stop the beating.

Golovkin gets his first big name opponent on October 17th »