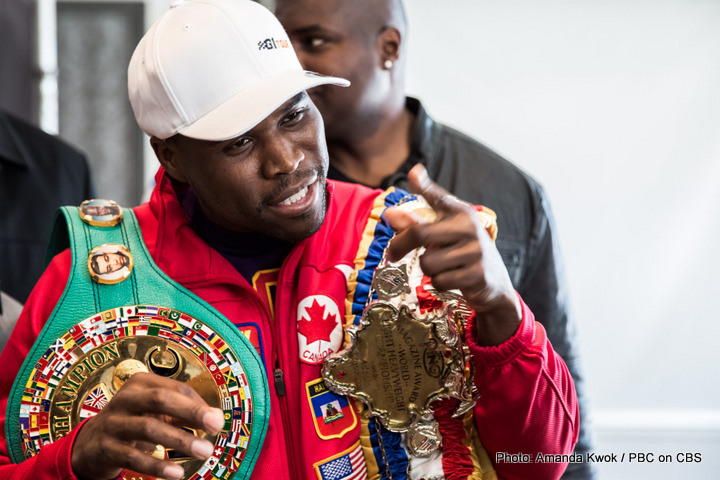 By Dan Ambrose: WBC light heavyweight champion Adonis Stevenson (26-1, 21 KOs) says he’ll be fighting #9 WBC contender Tommy Karpency (25-4-1, 14 KOs) on September 11th in Toronto. This will be a voluntary defense for the 38-year-old Stevenson, who recently defeated former WBC super middleweight champion Sakio Bika by a 12 round unanimous decision in his last fight in April.

If this fight does actually take place, Stevenson is going to take a lot of heat from boxing fans because they want to see him start facing quality opposition. From outward appearances, it just looks like Stevenson has been milking his WBC 175lb title for the past two years since capturing the belt with a 1st round knockout win over Chad Dawson in 2013.

Karpency is an odd choice for Stevenson to be facing, because he hasn’t really done much with his career aside from winning a close 10 round decision against Chad Dawson in October of 2014. That was a fight in which Dawson suffered a hand injury in the 4th round, and was forced to fight the remainder of the fight with one hand. Even fighting with one hand, Dawson came close to beating Karpency. Dawson was staggered at one point in the fight, and that looked really bad for him.

Karpency fought for a world title in the past in losing to former WBO light heavyweight champion Nathan Cleverly and Fonfara in 2012. Karpency also was beaten by Karo Murat in 2010. Since his win over Dawson, Karpency has beaten Rayco Saunders.

Stevenson has the potential to get some big money fights if he and his adviser Al Haymon would step it up and look to unify the titles against Kovalev, but it doesn’t look like that’s going to happen. Judging by the kind of match-making that’s being done for Stevenson, it appears that he’s just looking to try and extend his time as the WBC light heavyweight champion for as long as possible without taking any risks whatsoever.

This could be why we’re not seeing Stevenson matched up against anyone that could potentially give him problems. It would be far more interesting to see Stevenson face the likes of Jean Pascal, the Cuban Gonzalez, Barrera, and the Russian Beterbiev. Those would be potentially tough fights for Stevenson where he would have to prove that he could beat someone who has the punching power and the skills to really give him a tough test. It wouldn’t be one of his easy fights like what we’ve been seeing from him.

Mayweather vs. Berto is a good fight if it’s on CBS, says Kellerman »