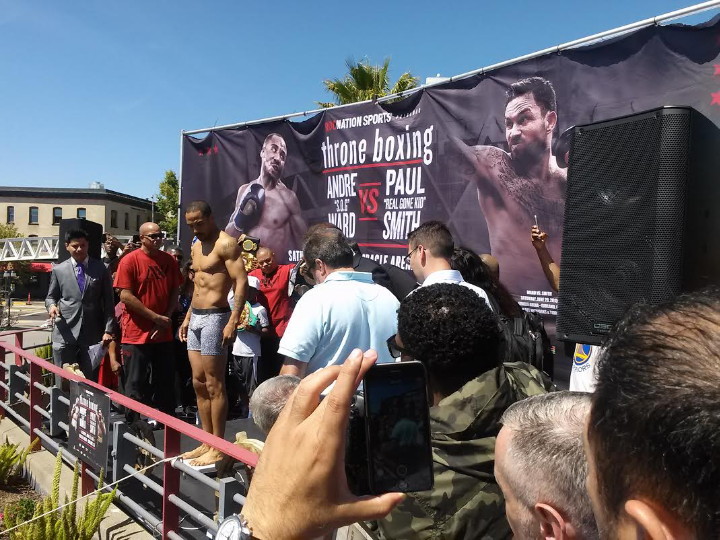 (Photo credit: W. Williams) By Scott Gilfoid: In what has to be interpreted as a lack of discipline on Paul Smith’s part, he came in 4.4 pounds over the 172 pound catch-weight limit on Friday at the weigh-in for his fight on Saturday night against WBA super middleweight champion Andre Ward (27-0, 14 KOs) at the Oracle Arena in Oakland, California.

It’s unclear how much of Smith’s purse he’ll be giving up by coming in over the catch-weight limit. You have to imagine that it’s a substantial portion of his purse.

Ward was his usual professional self in coming in at 171.8lbs, in easily making the 172lb catch-weight limit. I just don’t know what happened to Smith (35-5, 20 KOs) though. The guy fights at 168, and should have had no problems making 172, but it looks like he slacked off and didn’t train as hard as he should have.

Smith, 32, not only didn’t make the 172 pound catch-weight limit, but he also missed the light heavyweight limit of 175 as well in coming in as a cruiserweight at 176.4. Smith looked flabby around the gills and I think he was carrying around an excess of 20 pounds of blubber. It looks like Smith assumed that with the extra four pounds that he had to play with for the fight, he just didn’t monitor his weight correctly and perhaps ate too much thinking he could still make the 172 pound catch-weight limit. This obviously bad for Smith, because he was already out of his element against the talented Ward, but with him now overweight and flabby looking, I don’t see how Smith has chance of winning the fight. I just hope Ward is merciful with Smith and gets it over with neat and quick.

For Smith’s last fight against WBO super middleweight champion Arthur Abraham last April, Smith weighed in at 165.5lbs. The question is did Smith not take the Ward fight seriously due to there not being a world title on the line? What a shame. It’s so sad.

In hindsight, Ward should have offered the fight to someone like Callum Smith, James DeGale or George Groves. If Ward wanted a fighter from the UK, then I think those guys would have been far better choices for him. Heck, Paul Smith is coming off of back to back losses to Arthur Abraham, a fighter that Ward easily beat in the Super Six tournament in 2011. The fact that Smith couldn’t even beat a soft job like Abraham kind of tells you all you need to know about Smith.

« Mayweather asked about Khan fight: “I am not trying to con nobody”