Mayweather asked about Khan fight: “I am not trying to con nobody” 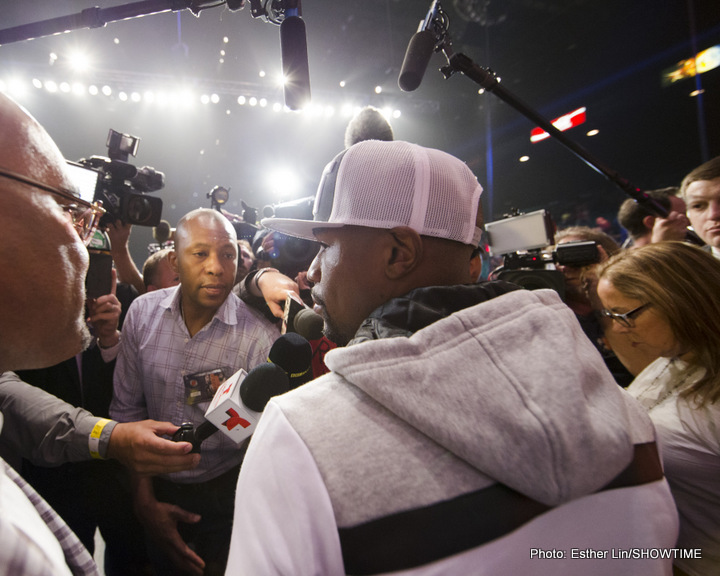 The “con” comment appears to be Mayweather’s way of saying that he’s not going to try and sell a bad fight to the boxing public that the fans don’t want or don’t believe will be a competitive affair. Mayweather is usually quite secretive about his opponents.

Mayweather likes to keep it totally secret until the last minute. However, in the past, boxing fans knew well ahead of time that he was going to be fighting Marcos Maidana in their first fight.

It was pretty obvious that Maidana was going to get the fight after his win over Adrien Broner in December of 2013. But for Mayweather’s next fight, there isn’t any fighter that jumps out at you as the guy that he’ll be fighting. 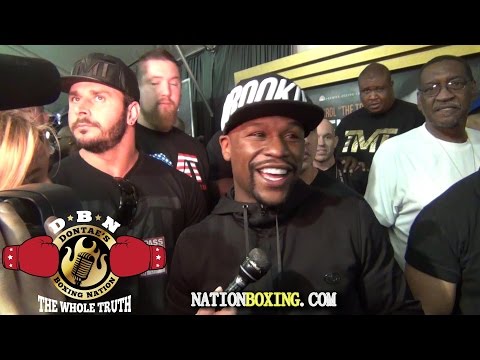 Certainly you can’t point to Khan as being the guy that Mayweather will be fighting next, not after Khan’s awful performance against Chris Algieri last May. I mean, you have to remember that Algieri is the same guy that Manny Pacquiao easily whipped in their fight last November.

With Khan barely beating Algieri, it won’t exactly make Mayweather look good if he turns around and faces Khan at this point in time. Mayweather won’t get any credit from boxing fans if he picks Khan and turns around and defeats him with ease. It would be a fight where Mayweather would be raked over the coals the minute he chooses Khan by boxing fans, the criticism would be never ending all the way up to the moment of the fight.

It wouldn’t matter if Mayweather did his job and smashed Khan because fans wouldn’t give him credit because Khan has already been destroyed by Danny Garcia and Breidis Prescott. Mayweather would essentially be competing with those guys to try and score a faster knockout than they did against Khan. Mayweather isn’t a knockout puncher at 147, so the chances are that he’d have to go the full 12 round distance for him to get the win.

Mayweather will likely steer clear of Khan and opt to choose an opponent that is more agreeable to what the fans are looking for in one of his opponents. I’d say someone like Danny Garcia or Miguel Cotto would be perfect for Mayweather.