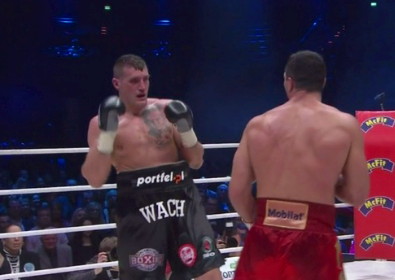 By Scott Gilfoid: There’s a possibility that undefeated British heavyweight Anthony Joshua (13-0, 13 KOs) could be taking a step up against former world title challenger Mariusz Wach (30-1, 16 KOs) on September 12th in the UK, according to Fight News. It’s still not confirmed that the fight will take place, but there’s agreement between the promoters.

Thus far, Joshua has been fighting guys mostly in the 6’3” size category, and none of them have been big punchers or very skilled. Wach isn’t very talented either, but he is big and he can punch a little if he’s able to land his shots. If Wach lands his right hand against Joshua, I wouldn’t be surprised if he knocked him clean out.

Joshua has a fight scheduled next month on July 17th in Manchester. The opponent hasn’t been named yet, which pretty much means that it’s going to be another stiff like the guys that Joshua’s promoter Eddie Hearn has been feeding him to make him look good. In Joshua’s last fight he defeated journeyman Kevin Johnson, who did little more than come out, throw some air jabs, and then go to the ropes and cover up. It was just pitiful.

It was the same routine as other opponents have done against Joshua. They don’t even try to fight. They just go to the ropes and cover up like sparring partners. Most of them are pretty old in the mid-30s to mid-40s, and not capable of even putting up decent fight for even a round.

Wach has won his last two fights since he was beaten by Klitschko in 2012. He’s facing journeyman Konstantin Airech tonight in Poland. Wach has beaten Travis Walker, and Samir Kurtagic. Wach hasn’t beaten anyone special, and he’s not exactly been busy in the last three years.

If Wach can land one of his right hands on Joshua’s chin, it might be interesting to see how he reacts to the blow. Other than that, Wach starts slowly in his fights like an old V8 kicking to life, and blowing black smoke out it’s rear end. Wach starts way too slowly and by the time he starts throwing punches, the referee will likely be waiving it off.

I would like to think Wach will come out looking to take Joshua’s head off from the opening bell, but I don’t think that’s going to happen. Wach thinks too much, and is too slow to react in his fights. I mean, if came out swinging for the fences from the clang of the opening bell, I think he’d have a chance of stopping Joshua, but unfortunately that’s not how Wach fights. He waits so long to get his shots off that the entire round goes by and he’s just getting a punch off.