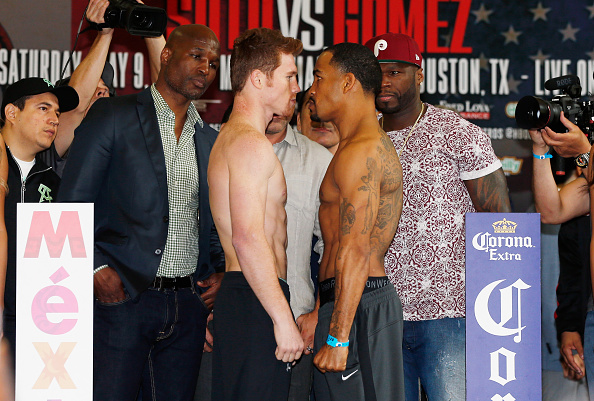 (Photo Credit: Ed Mulholland/Golden Boy/Golden Boy via Getty Images) By Gav Duthie: Whether your in Germany, The United Kingdom or The United States you have some top quality boxing to look forward to in order to get over the Floyd Mayweather Jr v Manny Pacquiao hangover, I will attempt to preview and predict some winners for these bouts.

Up to 40,000 fans could be in attendance to watch this huge bout between two of the best Light Middleweights in Canelo and Kirkland. For the casual fan who is maybe disillusioned after the Mayweather-Pacquiao fight don’t worry this will be a tear up. James Kirkland doesn’t know how to fight any other way other than going for a knockout. This is exactly the fight Canelo needs to look good use his counter punches and without having to figure his opponent out. Kirkland hasn’t fought since the back end of 2013 and can only get motivated if its financially worth his while. Kirkland has been down a few times and his idea is that either I will knock you out or you will knock me out. I think Canelo is too good for him.

This will be another war. Ricky has seemed to be on the slide and at age 32 its more hope rather than reality that would see him win this. There is a bit of conjecture as to the weight of this fight it may be at 135 or 140lbs. Figueroa has never fought as a light welterweight, Burns once but he looked poor and overweight around the mid section. This looks a banker for Figueroa a big name win without facing a genuine 140lb fighter. Ricky knows he is in the last chance saloon and although he has been down a few times he has the biggest heart in boxing. Ricky will need a Roman Martinez type performance with huge work rate to win this, does he still have enough in the tank. Figueroa’s left hook could be the key to this fight.

This was originally billed as a unification bout between Kameda WBO champion and McDonnell WBA. The WBO wouldn’t support this though as McDonnell was only the WBA regular champion not Super. I’ve never been a huge fan of McDonnell but he is a freak for a bantamweight. At 5″8 he is very tall for 118lbs as is his reach and he has a great engine over 12 rounds. Kameda is not much smaller though so this advantage will be limited. Kameda is a southpaw with a quick left hand and will look to dominate when his opponent is backed up. The Japanese fighter was lucky to win his last fight So this is a 50-50 for me.

This is for the vacant WBA Title stripped from Carl Froch for failing to defend. It is a little bit strange these two getting the nod. Sturm has fought once at 168lbs drawing with German compatriot Robert Stiegletz and Chudinov is a 12 fight novice. The Russian Chudinov is the WBA interim holder after a brutal second round knockout over previouky unbeaten Aussie Ben McCullouch. Chudinov is solid, aggressive and has power in either hand and this is not a natural weight for Sturm. I feel that Chudinov will have enough to win this one.

Once again another setback for American Austin Trout as Anthony Mundine pulls out with an ear condition. Its been a funny few years for Trout. He was right up there after outpointing Miguel Cotto in 2012 but after losing a tight decision against Canelo and a landslide v Lara he took some time out. In what many thought was simply a comeback fight against Daniel Dawson he suffered a scare being knocked down twice but won a unanimous victory. Luis Galarza has stepped in but he is C-level at best. He was stopped by Kell Brook on his American debut on the Andre Ward-Carl Froch undercard in 2011 and has only fought three times since. This should be an easy night now if he keeps motivated.

This is quite a risky fight. Not that Love is anything special but he can punch and is quite durable and considering Joshua fight Kevin Johnson in 3 weeks I’m a bit surprised. Eddie Hearn obviously felt he needed to save this Birmingham card after pulling hometown fighter Frankie Gavin from the roster so Joshua stepped in. Love went 12 rounds with Shannon Briggs recently and was stopped by new WBC challenger Eric Molina in 8 so it is on Joshua to do the job better which I think he will.