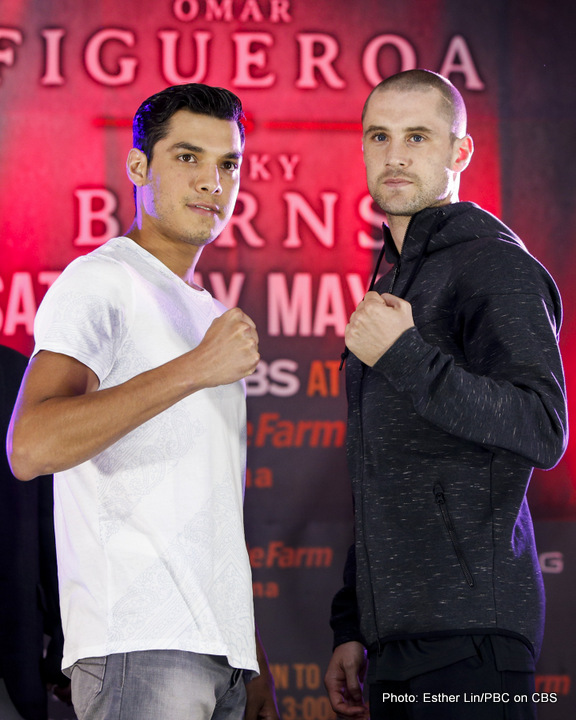 By Scott Gilfoid: Barry McGuigan has his doubts whether former two division world champion Ricky Burns (37-4-1, 11 KOs) will be able to pull off an upset tonight in his fight at light welterweight against the young 25-year-old former WBC lightweight champion Omar Figueroa (24-0-1, 18 KOs) on CBS on Premier Boxing Champions at the State Farm Arena, in Hidalgo, Texas, USA.

Burns, 32, is the wrong age, McGuigan says, to be facing a young fighter like Figueroa. It’s the wrong country for the fight as well because Burns will be traveling outside of the friendly confines of Scotland to face Figueroa in his home state of Texas in the United States.

The fans will be in Figueroa’s favor and you would have to suspect that any close rounds would go in his favor as well.

“I can’t see how the circumstances favor him [Burns],” McGuigan said via the Mirror.co.uk. “Figueroa is testing the water up at light welterweight and Burns has agreed to step up to 140 for this one outing…It will be a huge surprise if he [Burns] pulls it off.”

Figueroa isn’t that great of a fighter, as we saw in his fights against Daniel Estrada, Jerry Belmontes and Nihito Arakawa. Figueroa seems to have lost something from his game ever since his way with Arakawa in July of 2013. Figueroa won that fight by a 12 round unanimous decision, but he took a lot of punishment from the light hitting Arakawa in doing so.

What Arakawa lacked in punching power he more than made up for in his high volume work rate and his superb stamina. He was able to take Figueroa’s big shots all night long and answer back with his own shots. The blueprint in how to beat Figueroa was created by Arakawa with the way he stood in front of Figueroa and matched him punch for punch.

The hard part is you have to be able to take Figueroa’s shots, and you have to throw as many punches as him. Can Burns do that? I doubt it, but that’s what he’s going to have to do if he wants to defeat Figueroa tonight. Burns sure as heck won’t be able to tie Figueroa up all night long with clinches to shut him down in order to get the victory.

There’s no way the judges will give Burns the win if all he does is looking to keep Figueroa from getting his shots of the way Burns did with Raymundo Beltran in their fight in 2013. That might have worked on that occasion in their fight in Scotland, but I don’t see it working in Texas. If Burns wants to beat Figueroa, he’s going to have to actually throw punches and not clinch all night long.

“Burns goes out as the opponent to suit the other guy,” McGuigan said. “He [Burns] was lucky to get a draw against Raymundo Beltran two years ago…in his [Burns] prime, Burns had the advantage of being able to boil his 5ft 10in frame down to the 9st 4lbs super featherweight limit. Between the weigh-in and fight time, he would get a stone heavier, and be strong with it.”

I agree with McGuigan, a lot of the success that Burns had was when he was able to dehydrate down to fight at super featherweight against guys that were smaller than him. Once Burns put the weight back on after rehydrating, he looked like a welterweight facing a super featherweight. Plus, Burns was a lot taller than his opponents at 5’10”, and this no doubt helped him. But after Burns moved up to lightweight, he wasn’t as good because he didn’t have the weight advantage that he had at super featherweight. Burns was still able to win for a while due to the match-making that was done for him, but once he actually had to face good lightweights in Jose Gonzalez, Beltran and Crawford, you could see the beginning for the end for Burns.

The only way I see Burns having any success with what’s left of his career is for him to try and melt back down to super featherweight to fight at that weight class once again. He would have to cut down to 130 for that to happen. The current WBO super featherweight champion is Roman Martinez, a fighter that Burns defeated five years ago by a 12 round unanimous decision.

Here are the weights for tonight’s fight card in Hildago: