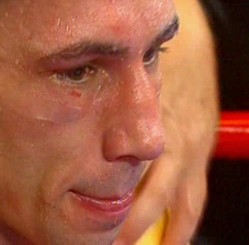 This is the belt that is currently in the hands of Carl Froch. This means that he’ll be stripped of his WBA 168 pound strap by the World Boxing Association. The reason why Froch will be stripped is because he didn’t agree to the negotiations with Andre Ward after the WBA ordered the Ward-Froch fight.

If Froch does indeed get stripped of his WBA title, then he’ll no longer have any world titles in his possession. He recently gave up his IBF 168 pound title after he was ordered to face #1 IBF James DeGale.

When the WBA ordered that the Froch-Ward negotiations begin, Froch made it a point to say that he wouldn’t be vacating the title. He was going to keep the strap. However, not long after that, Froch and his promoter Eddie Hearn started making noise about Ward not wanting to come to Nottingham, UK to take the fight. Ward was open to fighting Froch in the UK, but just not in Nottingham.

If Hearn and Froch were insisting on the fight with Ward take place in Nottingham, then it’s not surprising that the negotiations went nowhere. I mean, how do you expect to negotiate a fight when you insist that a fight take place in a particular city.

“Just a few hours before the press conference we received confirmation from the World Boxing Association that Fedor Chudinov’s fight with Felix Sturm will be for the full WBA title as Andre Ward and Carl Froch couldn’t agree on a fight in due time,” said promoter Vladimir Hrunov via Fightnews.com.

If the WBA has indeed confirmed that the Sturm-Chudinov will be for the WBA regular super middleweight title, then it tells you that Froch is going to be stripped of his title by the WBA. Wow! That’s going to be tough for Froch. Not sure if he and Hearn saw that one coming. But to be honestly, I’m not surprised at all that he wasn’t able to negotiate the fight with Ward.

It’s hard to imagine that the winner of the Sturm vs. Chudinov fight will be for the WBA 168 pound title, because I don’t see either of them as world champion material at 168. If Sturm wins the fight, then he’ll very likely face WBO super middleweight Arthur Abraham in a unification match.