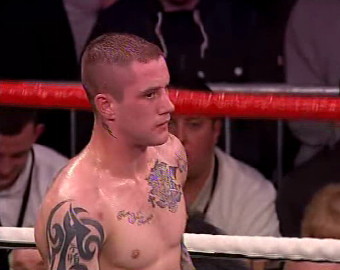 By Frainy: Boxers all over the world are heavily criticized for being inactive, for shying away from fights or for hand-picking opponents in order to preserve their reputation. Indeed, gone are the days of the top fighters or indeed any fighters fighting over 100 fights in their career.

The sport has become far too physically demanding for this to be possible as well as TV deals and money grabbing promoters heavily influencing the career choices made by those in the upper echelons of the sport.

Yet for me personally, there can be no excuse for shying away from a fight against someone with an uncompromising style or an impressive resume. It never happened in the past so why is it happening now?

However, one man in particular is going against the grain of the modern fighter and fighting anyone, anywhere. That man has been the pride of Scottish boxing in recent years, Ricky Burns. Much has been said of Burns, his lack of knockout power, his now very suspect jaw and his disputed draw against a highly unfortunate Raymundo Beltran in 2013 that led to the Scot retaining his WBO title. Sure, in terms of technical ability, Burns may not quite be on a world-class level at Lightweight, despite winning and then successfully defending the WBO title for four fights against tough opposition. Yet what cannot be disputed is Burns heart and desire to win, qualities that are all too often lacking in the modern day boxer.

Take for example his draw against Beltran. There can be no doubt that Beltran dominated that fight from start to finish and has every right to feel hard done by when the official scorecards were produced. Yet Burns fought from the 2nd round onwards with a broken jaw, a truly astronomical achievement. He then took the immensely talented Terrence Crawford the distance, only to lose convincingly on the scorecards and thus lose his belt to the enigmatic American. Many thought that would be the end of the line for Burns. He’d had a phenomenal career, fighting above and beyond himself at world title level for years and had put on shows that Scottish boxing would never forget. Yet his passion for the sport and the heart that got him to the peak of his power drove him to continue fighting when many others would have stopped.

A subsequent defeat to Dejan Zlaticanin again signaled to many that he was a spent force yet in the last couple of days it has been announced that he will be making his American bow against the unbeaten former WBC champion Omar Figueroa on May 9th. This is a massive fight and its testament to Ricky that he has secured it as many thought that his performances against Gonzalez, Beltran, Crawford and Zlaticanin were that of a fighter past his sell by date and on the verge of retirement.

Ricky Burns’ heart, desire and passion for the sport has to be commended by fans worldwide. Too often in recent times we have seen boxers cherry picking their opponents, choosing to fight safely in order to preserve their reputation. Burns is a throwback to the fighters of old, a man with a true love for the sport and a man with no fear of who or where he is fighting.

I am not for one minute championing Ricky Burns as one of the worlds greats, he’s not. Yet it is refreshing in a time where the sport has never been so monopolized by money and TV rights, to have a fighter that is not only down to earth and very approachable, but who also has the heart of a lion and a true passion for the sport, qualities that the boxers of old were renowned for. If all fighters had that willingness to fight challenging opposition at every step of the way then maybe debacles like that of the Mayweather/Pacquiao situation would not come to fruition.

Anthony Dirrell vs. Badou Jack on April 24th in U.S »