Anthony Dirrell vs. Badou Jack on April 24th in U.S 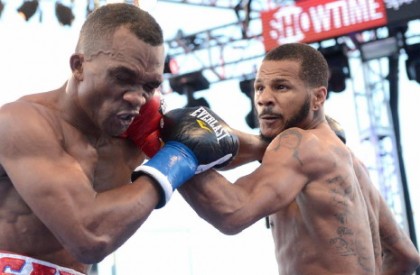 (Photo credit: Sumio Yamada) By Scott Gilfoid: WBC super middleweight champion Anthony Dirrell (27-0-1, 22 KOs) will be putting his unbeaten record on the line as well as his WBC 168 pound strap against #10 WBC contender Badou Jack (18-1-1, 12 KOs) in a scheduled 12 round fight on April 24th at a site to be determined, according to Dan Rafael.

Dirrell was supposed to be defending his WBC title against his WBC #1 mandatory challenger George Groves, but Dirrell instead asked for an extension so that he could get in his voluntary defense first in April before he takes on Groves later on in the year.

Dirrell isn’t worried about fighting Groves. He just wanted to get his optional title defense that he had coming to him before he faces Groves. Dirrell figures to easily take care of Groves when the time comes in 2015. In a way, this could be a very easy year for Dirrell with him having two one-sided title defenses.

Groves is the mandatory, but he’s looked terrible in his last four fights against Carl Froch [twice], Christopher Rebrasse and Denis Douglin. Groves lost both fights to Froch by knockout, and yet the WBC still allowed Groves to fight in a WBC 168 pound eliminator against Rebrasse rather than picking a contender who has been winning their fights lately.

The winner of the Dirrell vs. Jack fight will then be required to defend the WBC title against Groves next. Groves’ promoters at Sauerland Events attempted to get Dirrell to face Groves in his first defense, but the World Boxing Council said that Dirrell could take an optional title defense against Jack, as long as he did it by April. Sauerland then appealed the WBC’s decision, but they ruled against them.

It might actually be better for Groves to have more time to wait for his title shot against Dirrell, because the way Groves has been looking recently in his last three fights, I don’t think it would be a good idea to put him in with Dirrell right now.

Groves was knocked out badly by Froch last year in May, and Rebrasse, a light puncher, appeared to shake Groves up at point pint in their fight in 2014. Even in Groves’ last fight against little known 2nd tier fighter Douglin, Groves took a lot of punishment.

Perhaps if Groves has more time to recover from his knockout loss to Froch, he might be able to stand a better chance against Dirrell. I mean, I still see Groves getting knocked out by Dirrell, but I think he’ll be better off having a long rest before he takes that fight rather than jumping straight into it.

Jack, 31, was knocked out in the 1st round by the hard hitting Derek Edwards in February 2014. It was a situation where Jack was dropped by a big right hand from Edwards, and he never recovered from the knockdown. Since then, Jack has won his last two fights in beating Jason Escalera and Francisco Sierra.

Golovkin targeting to return in May 2015 »