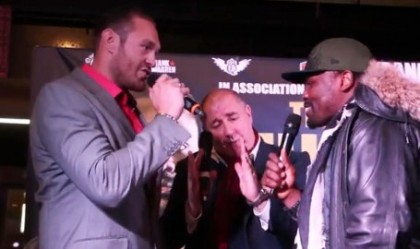 by Ciaran McKInney: This coming Saturday, after what seems like an endless stream of press conferences, retirement threats and pre-fight antics, the boxing world will watch ‘Bad Blood’. The card will be headlined by the rematch of Tyson Fury vs Dereck Chisora. This domestic level bout will see the british and European straps up for grabs, however, the real prize of this bout, is the mandatory position for a fight with Wladimir Klitschko some time in 2015. This fight could potentially be a fight of the year candidate in the heavyweight division. It has all the ingredients, two hungry combatants, big punchers and a grudge that has played out over the course of the past 4 years.

Firstly, you have Tyson Fury, a man who possesses all the attributes to be a star, tall, excellent reach, solid skill set and one-punch knockout power, this of course with his ability to cause a stir and controversy, right or wrongly, the man knows how to sell himself. The sad thing is, since his routine victory over the drab and out of shape Chisora in their first fight, he has been in a seemingly unending void of stagnation. Of course, with opponents pulling out and bereavements, this isn’t exactly his fault, but the fact remains, this is a fight who has recently been crippled by inactivity and when he has been in the ring, has looked anything but impressive. We seldom see the fighter who claims to be all of the things I described above. He had to climb off the canvas to beat a pumped up cruiserweight in Steve Cunningham, plus a slate of thoroughly unimpressive victories over Vinnie Maddalone, Martin Rogan and Kevin Johnson to name a few.

Since losing to Fury, Dereck Chisora has gone on to face a list of opponents that would rival any heavyweights over the past 5 years, unfortunately for him, he lost 3 of them (most fans with a pair of eyes would count it as two due to being robbed versus Robert Helenius), but the fact remains, ‘Del Boy’ talked a great game, but when push came to shove, he couldn’t produce the goods a the highest level, a stunning knockout loss to David Haye came just after a brave, but one-sided loss to Vitali Klitschko, which was no disgrace . After many unsuccessful camps/bouts, Chisora, under the tutelage of Don Charles, made a change in diet and attitude towards training and fitness. it would be hard to argue that this has been a roaring success for him, he has recorded 5 wins on the bounce, (4 KO’s) against second tier opposition, but it was all part of the rebuilding process, he has had to climb of the floor, but got back up to gain a knockout. He has looked in fine shape with a higher work rate and punch output. The only blip may be a controversial stoppage of Malik Scott.

For many fans, the fight has gone far beyond its sell by date, and has now gone under the radar for many people, who myself included, are far more intrigued and excited at the chief support on the card between Billy-Joe Saunders and Chris Eubank Jr. But the fact remains, in terms of the heavyweight division and competitiveness, this is probably the best on offer since. This fight could go down the same path as the first fight, a comfortable fight at range for the taller and more skillful, however I can’t see that, at least not as comfortable. The Chisora of late 2014 embodies a spirit of rejuvenation and quite simply, he is a fighter who cannot afford another loss on his record. Both of these men are powerful punchers when they land flush, yet they are both susceptible to hitting the canvas. So, I do expect knockdowns, especially if Fury is drawn into a war off attrition by the tactics of Chisora, and whilst he has climbed from the canvas before, if he is caught by one of Chsioras chopping overhand rights and a combination of his supposedly ‘accidental’ rabbit punches then I don’t see this fight going to the scorecards. Whilst Fury could easily box Chisora into oblivion if he sticks to a gameplan, I just don’t see a fight who has been so inactive being able to produce a methodical 36 minutes of controlled boxing. So, honestly, I want a knockdown filled war, and I like the idea of the a very live underdog. At the risk of looking very silly come the 29th November..

Secondly, on this ‘Bad Blood’ card, we have the chief support, a rivalry punctuated with ill feeling and bitterness. This is one of the most eagerly anticipated bouts of the year domestically, it sees the coming together of Billy-Joe Saunders and Chris Eubank Jr. A fight that contains a huge amount of risk for the champion, Saunders, up against a man who has everything to gain in Eubank Jr. There is no debating that Saunders has fought fighters of a higher calibre, a blowout victory over world title challenger Jarrod Fletcher, a shutout versus Emanuele Blandamura and a controversial victory against John Ryder standing out on his record. Eubank Jr has done pretty much the opposite to his adversary, whilst his rival had an impressive amateur career and even made an appearance at the Olympics aged just 18,

Eubank Jr career has 100% been geared towards the professional game. He has fought a slate of journeymen throughout his early career, and when fighting opponents of that nature, there is a certain ceiling on how impressive you can look. What is encouraging, are the reports that come out from sparring sessions, confirmed by the likes of Carl Froch, George Groves and Adam Booth, that this man is the real deal. Yet sparring and fighting on the night have been proven time and time again to be two very different things.

If we compare records and the respective levels of competition of the two fighters, then this is a seemingly easy fight to call, yet many refuse to be drawn into that line of thought, and this fight has split the public. Whilst Saunders has an admirable work rate, he could not be described as heavy-handed, he leans towards an amateur, busy style of the Olympian, a point scorer. Eubank Jr, hits to hurt, and has done so on plenty of occasions, this a previously stated has to be taken with a pinch of salt, due to the quality of opponent. This is an incredibly hard fight to call but it has the potential to be a memorable one, Saunders main argument is that Eubank is out of his depth, and doesn’t belong in the ring with him. These are all comments that were bandied about before, when a man named Nigel Benn was champion and the father of Chris Eubank Jr shocked the world.

At a certain time a fighter must make a step up in class and find out what level they are at. Bad Blood is the acid test for Eubank Jr. Although impressive and efficent in the ring, Billy-Joe Saunders doesn’t inspire my backing, coupled with rumours of a poor camp, I can see a potential shock on the cards. If he sticks to the gameplan, then there could be a narrow points win for the champion, but this is boxing, and every once in a while, it throws up a shock and I think the raw power and enthusiasm Eubank Jr may be too much for Saunders, who may be in for a big shock due the flaw of underestimating his foe.